18-year-old Ev Bannen was just hoping to get admitted to college. He never expected to be recruited to a school for gods, where he’ll be spending his days building up his strength, learning to answer prayers and getting an education in religion alongside aspiring god of money Jaysin Marx, the lovely but troubled Maya Brünhart and anger-prone ginger Daryn Anders. But the organization of evil gods, Zero Grade, has plans to unleash hell on earth, and Ev and his friends soon become targets. What’s more, someone close to Ev is not who they claim to be, and their betrayal may doom mankind forever. Ev steps up to save the day, but does he even stand a chance in hell of defeating a legendary deity?

Second edition published June 2018. It fixes the errors in the original. 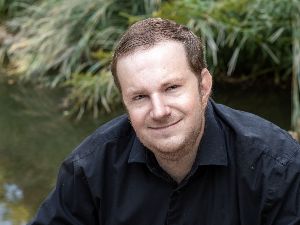 Scott Kinkade lives in Oklahoma where he struggles to put words to paper. He graduated from Oklahoma Christian University with a BA in Arts. His major was English/Writing. He enjoys reading, writing, TV, anime, videogames and comic books/manga. He has an unhealthy interest in history which is sure to get him in trouble one day.