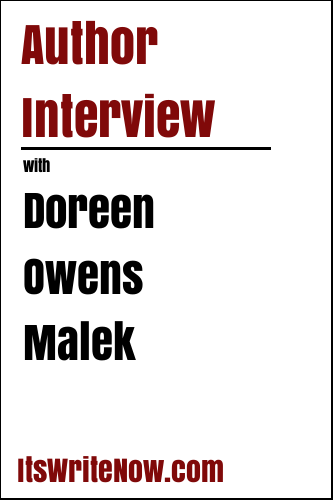 An American woman is kidnapped into the harem of a young pasha in Ottoman Turkey. In spite of her best efforts to resist, she falls in love with her imperious captor. After a battle of wits which brings him to heel, she must make a choice which will determine both of their futures.

Today I’m spending some time with Doreen Owen Malek to talk about her writing career and her historical romance novel ‘The Panther and the Pearl’. I’d like to start today by going into a bit of a deep dive into your book the ‘The Panther and the Pearl’. What seeded the idea for this book?
I was reading about the Ottoman Empire and became fascinated by the harem system and the culture surrounding it. I started to research the subject and wondered how an American woman of that time would react to it.

I love the concept exploring a westerner’s reaction to a foreign culture. How did you go about researching this?
I did a great deal of research about Ottoman Turkey by reading books about the period. This research was done before the internet became a commonly used research tool. I visited libraries and purchased countless books.

Once you had an understanding of the culture and time period, how did the characters come to you?:
I started to think about what a local ruler would be like if he had a hybrid parentage which pulled him in two directions. Kalid in this story is the son of a Pasha but has a British mother. His complicated heritage draws him to his American captive because she reminds him of the Western traditions he learned as a child. Sarah sparks a response in Kalid because although she is difficult, she matches him intellectually and has a spirit he has not found in the other harem women.

That smart and at times difficult spirit of Sarah’s is a really strong feature of this book. Was this inspired by your own life?
My experience as a woman in law school, at a time when law students were 85% male, gave me some insight into the heroine’s plight in this story. I could relate to a situation in which I had little control over my fate and was treated as a second class citizen.

This background forms the basis for many of my stories. The heroines in the romances are often lawyers and legal issues are interwoven in the narrative.

So, is it a conscious choice to incorporate strong women into your books?:
Yes. I like to portray intelligent and resilient women involved in challenging relationships that overcome obstacles.

Another facet of this book is the dynamic relationship between Sarah and Kalid. Do you want to stay with them longer?
I did want to stay with Kalid and Sarah and brought them back in the sequel to The Panther and The Pearl, which is called Panther’s Prey. I have considered the idea of returning to the couple again to write about their children.
What did you find the most rewarding thing about writing this book?:
The most rewarding thing was creating characters that fit into a past era and deciding how they would behave in the imaginary situations I invented. I routinely get letters from readers who have made this book my most popular historical.

Can you let us know about what are you working on next?:
The first of my new projects to be released will be The Seduction of Tallchief, which may appear first as a Kindle Scout prospect. More information about this will be available on my website shortly. This book is a stylish and sexy thrill ride, full of surprises, with a plot taken straight from today’s headlines and a Native American hero who defines the word “hot.” Tallchief is a proud and independent loner who doesn’t expect to be drawn to the spoiled heiress he meets while targeting her father. The villain is heinous, the intrigue is intriguing, and the love story is compellingly romantic. It will have you rooting for the bad guy to fall (hard) and for the desperate couple to overcome the obstacles separating them to find happiness. It’s a fabulous read you won’t soon forget.

Late summer will see the digital release of Abra’s Arranged Marriage, a romance which concerns a Philadelphia lawyer, Abra Hamilton, who travels to Texas to locate her recently deceased stepfather’s long lost son, Linc Fraser. Through a series of legal complications she winds up marrying Fraser in order to keep him out of jail. She also experiences the shock of adjusting to Texas culture and to the rough hewn but startlingly sexy Fraser. She falls in love with both, and discovers a new life of sensuality and commitment with the semi-stranger she has wed.

For all the many fans of A Marriage of Convenience, the long awaited Another Marriage of Convenience will be released digitally this fall. You’ll have the opportunity to meet some new Braddocks, as daughter Laura falls in love with a handsome stranger and finds heartbreak and fulfillment on the ranch in present day California. Tay and Sharon also survive a rocky patch in their enduring marriage to prove once again that love conquers all.

Wow, all of those upcoming releases are impressive. I’d like to get to know a bit more about you as a reader today . Who are your favourite authors, and do you believe that they have influenced your writing style?

My favorite authors span a variety of genres and time periods. Some of them are Evelyn Anthony, Ethel Edison Gordon, Judith Guest, Stephen King, and Edith Hamilton. I believe they have influenced my writing style because all are experts at plotting and defining intense relationships.

What are you currently reading?
I read fiction almost exclusively when I was younger. Since I have been writing fiction, I find nonfiction a refreshing change from my work. I have recently read Andrew Solomon’s The Noonday Demon and Jon Meacham’s biography of Thomas Jefferson.
When you were a child and were reading primarily fiction, what were you reading?
I was precocious and was reading adult books when I still in elementary school. I remember reading Gond With The Wind and Jane Eyre when I was in seventh grade. I kept a dictionary with me and looked up any words I didn’t understand. It was easier to hide Jane Eyre behind the math textbook than it was to hide Gone With The Wind. When I was a small child my favorite book was The Hundred Dresses by Eleanor Estes.

Is there a book that you wish that you would have written?
The Persian Price by Evelyn Anthony.

On a more personal note, do you have any philosophies that you live by and your favourite quote?

My philosophy is ‘Education is the key to the acceptance of diversity’.

And my favourite quote is ‘There are more things in heaven and earth, Horatio, than are dreamt of in your philosophy…’ by William Shakespeare.

Finally, I would love to improve these interviews in the future. Is there a question that you haven’t been asked that you’d like to be, or anything that didn’t come up?

The question I wasn’t asked here but get a lot from everyone else is, “How do you prepare to become a writer?” My preparation was that I read everything I could get my hands on when I was young. I never consciously prepared for a writing career but picked up grammatical rules and usages through osmosis and never had to study them. Reading everything is the best preparation for producing written work yourself, and if you really enjoy reading the preparation will be a pleasure.
Thank you for that great writing advice and I hope that inspires some of our readers to consider taking to the keyboard or picking up a pen themselves. Again, thanks for your time today and I hope to catch up with you on one of your future book releases.

Want to find out more about Doreen?  Contact her at the following locations: