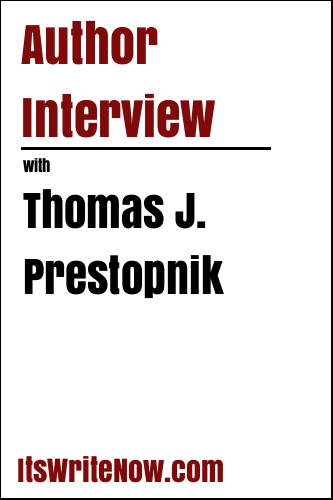 “Nicholas Raven and the Wizards’ Web” is a completed three volume epic fantasy. Nicholas, a young gristmill accountant in the tiny village of Kanesbury, feels a bit trapped in his day-to-day life and yearns for a little adventure. But be careful what you wish for because the schemes of two corrupt wizards carry him away on an adventure he’ll never forget.

Today I’m chatting with Tom about his novel ‘Nicholas Raven and the Wizards’ Web’. Tom, how did the idea for your book begin?
Shortly after I discovered and read “The Lord of the Rings” in 1975 at age twelve, I wanted to write my own epic fantasy. The first inkling of an idea came to me in the fall of 1978 while walking through some woods. As I state in the Foreword to my book, “Though no plot or themes occurred to me then, I recall stars and moonlight through the bony tree branches and the sweet scent of decaying leaves and soil. I observed grassy tracts of land just beyond the woods, imagining a secret gathering of people out there. An army perhaps? A conclave of spies? I don’t remember fleshing out the scene much more at the time, but I decided that that evocative setting would be included somewhere in this epic fantasy I would one day write.” Now that the book is finished all these years later, I can’t point to a specific scene resulting from my walk, but it’s my earliest memory planning this story.

So you’d had some sense that this was something you wanted to write for a long time. How long did it take for you to write this book?
Short answer-almost 37 years, from the autumn of 1978 to the end of January 2015 when the last edit was completed. More specifically, I began thinking about writing a huge fantasy novel beginning in autumn 1978, and ten years later, had my first outline completed in July 1988. It was handwritten in a spiral notebook. I revised the outline a few times and then began writing the book in June 1999. I constructed four accompanying maps shortly after. I completed the first draft in May 2014 and finished the last of three edits at the end of January 2015. The book was published in three volumes (about 1900+ pages) in the summer of 2015.

I think that shows how just how much of a labour of love this book has been for you. After such a extended period of time with this book and the characters, what did you find the most rewarding thing about writing this book?
Finishing it! I completed the first draft in May 2013 after fourteen years, with almost two more years still to go for editing. I always knew I would reach the end, but September 2011 to September 2012 was the most gruelling year of writing “Nicholas Raven” since I was making so many changes to the outline along the way. But the result, I believe, was much superior to what I had originally planned. Typing THE END was a dream come true.

I can imagine that feeling must be fantastic. Writing over an extended period of time must change the underlying character of the book. For you has it a conscious choice to incorporate themes into your books, since you have had some much time with this world?

Sure, though others may emerge as the book takes shape, and ideas I originally had may be altered or more fully developed. One major theme in the book is the corrupting nature of the desire for power on a personal level and throughout a society. My original outline for the book was completed in 1988 after working on it for ten years, but I didn’t start writing the book until 1999. By the time I began writing the latter sections of the book around 2011 and beyond, I had made major changes to that part of the outline, developing and expanding upon some of those themes for the better. I knew years ago after first completing the outline that I wasn’t mature enough to tackle such a major project, and I’m glad I waited well into my 30’s before starting Chapter 1.

That is very admirable that you wanted until your maturity caught up with the project so that you could write something stronger. The two main strengths of this book seem to be the world you have created and the characters within it. How did these personas materialise?
Nicholas, the main character, came first, as I wanted to write about someone on a quest of some sort. But as this is such a plot driven book, the others, as best I can remember, came as needed as the story evolved. I didn’t start with a cast of characters that I wanted to build a story around. Bits of the story came first, and I populated it with whom I needed. As I rewrote some of the outline later, I added new characters to accommodate the changing plot lines.

Out of all those new character appearances, who were your favourites to write? And who did you want to continue with longer?
Hobin, the mountain guide, was originally going to serve as a stock character for a few chapters and then disappear as Nicholas goes on with his journey. But as I began to write about him and gave him a backstory, he took on a life of his own and continued on later in the book. In the end, it was difficult to stop writing about most of the characters as they had lived in my mind for so many decades. After writing the last chapter of the book and then rereading it months later to edit, I found myself cutting out a lot of pages because I had overwritten, probably at the time not wanting to let anyone go. But after rereading objectively, I learned to cut out all the extras that didn’t serve the story itself. That’s the beauty of editing. First write your heart out, then edit, edit, edit!

That is a good motto. I’m not sure enough people really emphasise how much editing is a part of the writing process. Did you find that you spent much time researching as another part of your writing process?

Very little. Occasionally I had to look up a few technical things, such as the workings of a gristmill, to get my mind where it should be when writing a scene, though usually very little of what I read would actually be included in the book. Mostly I’d look up how a person might dress in different time periods to get an idea I might use for one of my characters if I needed to mention something specific clothing-wise. I’m not good with those types of details. I prefer to make things up when I can.

Given that you prefer to make things up where possible, did you find that you used some of your own life experiences within the novel?

As I live in a small city in central New York State, the local and regional landscapes had a big influence on how I constructed the village of Kansbury, the home of Nicholas Raven, and other regions of Laparia, the lands where the story takes place. I also hiked several times in the Adirondack Mountains in New York years ago and based the Dunn Hills, a mountainous region in Laparia, directly on the Adirondacks.

What are you working on next?
I published a short novel in May 2016 for readers ages 10 to 13 called “Search for the Silver Swamp Monster”, Book #1 in the Griffin Ghostley adventure series. Quite a departure from “Nicholas Raven”, but a fun series to write nonetheless. Book #2 in a planned 12 book series is already outlined, and I hope to begin writing it soon.

Now, I’d like to find out a bit about yourself as a reader. I think that the answer to this question might be a bit obvious but I’m going to ask it anyway, who are your favourite authors. And do you think that they have inspired your writing?

J. R. R. Tolkien was my favorite author growing up, and his “Lord of the Rings” series had a great influence on me writing “Nicholas Raven and the Wizards’ Web” as both are sprawling epic fantasies. As for him or any other author influencing my writing style? To be honest, I’m not even sure what kind of writing style I have. I don’t really think in those types of terms. I just find a story I want to tell, and then try to tell it the best way I can.

So, what was your favourite story as a child?
“The Lord of the Rings” and “The Hobbit” by J. R. R. Tolkien, of course. I remember reading a mystery series during my grade school years by Elizabeth Honness which included “Mystery in the Square Tower” and “The Great Gold Piece Mystery”. I also enjoyed reading the various Big Little Books that we had at home.

All very solid story choices. And finally, do you have any philosophies that you live by?:
If at all possible, start what you finish.

And just from your perseverance with ‘Nicholas Raven and the Wizards’ Web’ alone shows how much you really do live by this statement. Thank you very much for your time today Tom. I really appreciate your generosity of time and good luck with your new 12 part epic.

Want to find out more about Tom?  Contact him at the following locations: