Author Interview with Michael G. Munz of ‘Zeus Is Dead’ 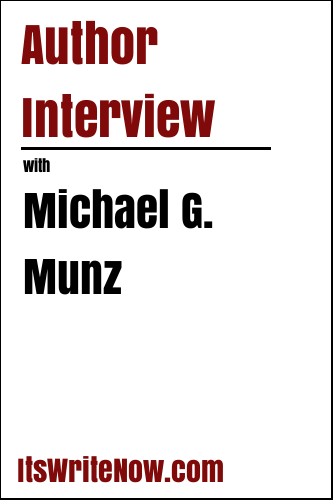 Today I’m discussing the novel ‘Zeus Is Dead: A Monstrously Inconvenient Adventure’ with it’s author Michael G. Munz.
Michael, thanks for spending some time today to discuss your book ‘Zeus is Dead’. Can you start off today’s discussion by giving a synopsis of your book.
Zeus Is Dead is a comedic fantasy set in a version of our world where reality TV heroes slay actual monsters and the Greek gods have their own Twitter feeds, casinos, and media empires. The book, which has been recognized in multiple contests, takes place soon after Zeus, the king of the Greek gods, gets assassinated. No longer bound by his order to withdraw from the world, the rest of the pantheon returns to modern times. Everything is going great until Apollo gets a vision about Zeus’s return…

I really love the concept of integrating the Greek gods with today’s social media and technology based ways of life. It’s a really different take. How did such a unique idea like this come to you and develop?

It’s come in little chunks ever since the mid-1990s. I knew I wanted to write a new myth with characters from Greek mythology, but I wanted to develop my abilities for a while in order to do it justice. In 2002, when I first wrote the short story “Playing With Hubris,” — in which a modern man meets two people in a café claiming to be Apollo and Thalia — I realized the potential that lay in putting mythological characters into our modern world. I played with the concept in a couple more short stories until, trying to decide what to write after finishing “A Memory in the Black” a number of years ago, I decided it was time to use the concept as novel fodder. Once I realized that Apollo, who seemed to have far more things to keep track of than the other gods, would have so much more to do with so many more mortals in the world, everything just fell into place after that.

Once you had this basic framework of ideas, did you need to undertake much research on the Greek gods and the surrounding aspects?

While a childhood of reading Greek mythology, coupled with a few Classics courses in college, gave me a solid enough foundation in the source material for me to come up with the general premise of Zeus Is Dead, the process of figuring out specifics involved reacquainting myself with it. I (re)read myths, thumbed through old textbooks (especially Mythology by Edith Hamilton), and looked for inspiration in articles about some of the gods whom I knew I wanted to include. One thing about Classical mythology is how many different versions there are — and that’s even before you take into account the Roman take on the Greeks’ myths. This alone gave me a lot of freedom. Who’s to say what the “real” story behind some of the myths are? Surely such egotistical beings would have encouraged changing some of the stories in a way that made them look better, after all. Still, for the sake of both retaining the mythological feel of the story as well as certain opportunities for humor, I did want to follow as many of the generally agreed-upon aspects as much as possible. Apollo would not be Hermes’s son, for example. I mean, not unless I came up with a really good reason.

Working with refining the versions of these characters must be entertaining for yourself. Did you find that you start to have favourites to write?
Thalia (the Muse of Comedy and Science Fiction), hands down. She’s smart, geeky, utterly chipper, and she’s the conversational equivalent of a caffeinated hummingbird. She’s got practically no filter—or, at least, not one that can keep up with the words that come out of her mouth—so much of writing her involved taking my goofy side and just letting it go full stream. (Of course, Thalia’s vocabulary is greater than mine, so there was some tweaking of word choice after the fact).

I love the idea of her being a caffeinated hummingbird. It would have been great to show that on the cover. Despite the obvious lack of hummingbird, I really like the cover of your book, can I ask who designed it?
The cover was designed by Greg Simanson, whom I worked with through Booktrope, the book’s original publisher. I love how it turned out.

Now that you’ve finished with ‘Zeus is Dead’, have you started working on your next writing project, and what is it about?
The follow up to Zeus Is Dead, tentatively titled Zeus Is Undead. And yes, zombies.

Mixing technology, Greek gods and zombies. Quite a combination, and I daresay that it should not be missed.  Now I have a few quick fire questions for you today. Get your Greek gods on your side and let us know:

What was your favourite book as a child?
Roald Dahl’s Fantastic Mr. Fox was constantly checked out from the library, but The Hobbit and Lloyd Alexander’s Chronicles of Prydain also come to mind.

If you could breed two animals together to defy the laws of nature what new animal would you create?
A porcupine and a hippopotamus. A PORCUPOTAMUS! I would train them to be the vanguard of my armies: spiny, foul-tempered tank-creatures to stop and poke all whom stand in my way. Plus “porcupotamus” is just fun to say.

*Laughs*. I so want to see that. Can you stand on your hands unassisted?
I can, but I can’t straighten up. Plus it hurts my hands when my feet are standing on them…

What’s the most unusual name you’ve ever come across?
“Bodger Nuggins,” a character from Mark Frost’s “The List of 7” comes to mind immediately.

I think that name is sufficiently strange.  Thank you again for your time and I’d like to wish you the best of luck with you ‘Zeus is Dead’ and your upcoming work on its sequel.

Want to find out more about Michael?  Contact him at the following locations: