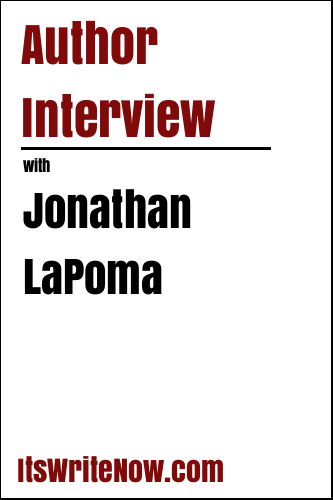 Developing Minds: An American Ghost Story follows a group of recent college graduates who struggle with feelings of alienation and their addictions as they try to survive a year of teaching at two dysfunctional Miami public schools. A poetic and insightful coming-of-age novel.

Today I’ve had the opportunity to catch up with Jonathan LaPoma, author of Developing Minds.  Jon, can you start off today’s interview by giving us a teaser of what is happening in your novel?

Developing Minds is centered on 24-year-old Luke Entelechy, an aspiring writer who sees his creative output suffer when he begins teaching at one of Miami’s most challenging middle schools. As the year progresses, however, Luke begins to relate to the neglect and abuse his students suffer, and is faced with a haunting decision: continue to let his dark past destroy him, or rise above the struggle to realize his potential as an artist and a real human being. Equal parts disturbing and humorous, Developing Minds offers a brutally honest look at the American public school system and the extreme measures many teachers take to cope with working in it.

That teaser is quite intriguing. How did you come up with the ideas in this book?
Developing Minds is loosely based on my experiences teaching in an at-risk Miami middle school in 2008. The idea came to me while I was on a road trip to Big Sur in July of 2012. I had no intention of writing the novel, but the stories of my experiences during that time period had such a power and potency, that I finally understood how to give them a release. I think something about the atmosphere in Big Sur helped me to gain some perspective on these stories and shape them into the novel as it is today. My intention with Developing Minds wasn’t to demonize teachers or the public school system — I simply wanted to show a portrait of these as true to my experiences with them as possible, while showing how these experiences affected the main character’s maturation and eventual transformation as a writer. The focus of this story is on this journey, not necessarily the state of affairs at the school.

With this journey that you take the readers on, did you consciously try and weave themes into it?
I think that’s different for every author. When I first started writing, I had the urge to tell stories but didn’t understand why. I’d write them then dig deeper to understand what it was I wanted to say. This would usually lead me to the story’s thematic content. Now that I’ve written several stories, I ask myself what is it that I’m really trying to say before I get started with the writing, and I use that information to guide the decisions I make with the writing. I use that information to weave together all of the characters, plot points, etc… to create one cohesive unit centered around a theme of some kind. This helps me to get to a final draft quicker than if I just start writing and search for a theme later. While I’ve found that starting with a theme first has helped me to write stories quicker and more efficiently, I don’t know if it’s helping me to necessarily write better stories. I think there’s something romantic about the idea of finding the meaning along the way, so I don’t advocate for either approach. Each writer should do what they think is best with regard to theme, even if that means they reject it entirely.

How much of the events in the story were also events you personally experienced?
Some of the scenes are inspired by events that either happened to me or other teachers I know.

Did you feel that you needed to do any research to supplement your personal experiences?
Not much. I’d been teaching for about five years before I’d started writing it, so I was already familiar with how to write an authentic and entertaining story set mostly in a public school.

Which characters from your novel were your favourites?
The characters I most enjoyed writing were Wolo and Margo. Wolo because he’s the most badass teacher in the school, and Margo because she’s a brilliant trainwreck. I exercised a lot of my pent up aggression through Wolo, and exercised some of my more ridiculous thoughts through Margo.

Is there any character in your book that you would like to go on a date with or take out for a beer?

Not a bad choice. Other than your personal experiences of a teacher in the classroom, how else do you think your role as a teacher has influenced your writing?
To survive as a teacher, you need discipline, respect, tolerance, confidence, creativity… and developing these skills has helped me to better understand myself and, thus, to write better stories.

And about how long did it take you write this story?
I wrote the first draft in a month (in an almost non-stop marathon once I got back from Big Sur in July 2012), but it took me about another year and a half to complete the final draft.

I quite like your book cover as well. Who is reponsible for it?
TheBookDesigners, and I highly recommend them!

What did you find the most rewarding thing about writing this book?
Etching my initials on the tree-trunk of life before its too late…

What are you working on next?
I’m currently working on a short script for a film director in London, and when that’s done, I’d like to write a few more feature-length scripts, edit my first novel, Understanding The Alacran, to get it ready for publication, and start a band.

How did you feel when you got your first book review?
I had mixed feelings. I was glad they liked it (4 stars), but I was disappointed that they put most of their emphasis on what they liked about the plot and less about the actual writing. For whatever reason, I was expecting more of an in-depth literary critique, but I was glad to start out with a positive review.

Who are your favourite authors, and do you believe that they have influenced your writing style? Absolutely! Reading has been my only form of instruction as a writer, and it’s a form I never tire of. Some of my biggest influences have been Jim Carroll, Jack Kerouac, Hunter Thompson, and Charles Bukowski.

And now my favourite part of the interviews, the quick-fire round.
What are you currently reading?
A Fan’s Notes by Frederick Exley.

What was your favourite book as a child?
To Kill a Mockingbird

Is there a book that you wish that you would have written?
Either One Hundred Years of Solitude or The Prophet.

If you could steal one thing without consequence what would it be?
A beautiful woman’s heart…

Can you curl your tongue?
Yep! I can make three loops out of it as well.

That’s impressive. Jon, I’d like to thank you again for spending your time with me today to go over your book. I hope that you find many new readers to amuse, and I’d like to wish you the best of luck with your scripts and other projects.

Want to find out more about Jon?  Contact him at the following locations: