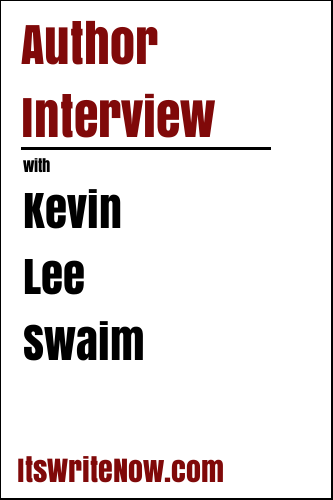 John Frist was a good soldier, until his Humvee was hit by an IED in Iraq. Discharged, he carries out one of the worst terror attacks in US history. Captured and brainwashed, he is remade by Project StrikeForce into a technologically enhanced super-soldier. Now he must find a former Mujahideen, Abdullah the Bomber, before Abdullah can strike the US with a terror attack of his own.
I’ve had the wonderful opportunity today to catch up with the military thriller writer, Kevin Lee Swain about his book ‘Project StrikeForce’.

Kevin, thank you for setting side time for us to talk today. You write very action packed, fast paced thrillers with great detailing, where did your drive to write books like this come from?
I loved the action adventure books of the sixties and seventies. Books like The Executioner and The Destroyer. I also love Elmore Leonard. I wondered if I could marry the two. Then, I read the story of a soldier denied emergency leave by a mistake at the Red Cross, who helps facilitate military leave when there is a death in the family.

I can see how a story like that would leave such as strong impression on you and contribute to the ideas behind this book. Did you use any of your personal experiences in your book as well?
I actually consulted with many family and friends who were in various branches of the military. Any mistakes in the book are my own, either because I chose to ignore their feedback or because I thought it hampered the plot. Make no mistake, though. They gave me fantastic advice!

And did you need to supplement their advice with any additional research?
I did extensive research on everything from roof ballast rock to improvised IED’s. A lot of detail got cut as I tried to make it more character driven than tech driven. And, of course, some facts were stretched. It IS fiction, after all.

Stretching the truth is the best thing about fiction. Now, as you’ve mentioned that you tried to put the focus onto your characters, how did you ensure that they were developed with enough strength to be believable in the story?

I wrote detailed character sheets before I started, but was amazing when some of the bit players became much more integral to the plot than I’d planned.

Who was your favourite character to write?
I actually liked writing Abdullah, the Bomber. He’s not out to attack the United States on a whim. He has a legitimate complaint about how he was treated, and about how he feels betrayed. It was important that I show how serious his faith was to him.

Do you ever dream about your characters?
All the time. They won’t stop talking to me!

I think it’s the sign of a good character if they won’t stop talking! As you mentioned earlier in the interview, your cross between action adventure books and the work of Elmore Leonard was deliberate, did you also consciously decide to include certain themes into this book?
Yes. I actually liked the circular story telling of Oedipus the King, and tried to emulate that kind of circular storytelling in Project StrikeForce.

I really like circular storytelling too. Did you find writing that style of story the most rewarding thing about writing the book? Or was it something else?
The editing, actually. There I was able to take a mishmash of storytelling and whittle it down into a coherent plot. I started at 109,000 words and wound up with 91,500.

And did you use any specific writing techniques to get to the stage were you could send it out to beta readers?
I try to write 2,000 words a day, but I’ll settle for 1,000. I type and use dictation, but all rewrites are done with my trusty red pen.

And using these methods, how long did it take for you to write the book?
It took about six months from first page to final draft.

And when you got the final draft you obviously choose this pretty awesome cover to match your story. Where did you get it designed?
Debbie at TheCoverCollection.com. She’s simply amazing!

Now, that you’ve gotten ‘Project StrikeForce’ completed, what are you working on next?
I’m currently working on the third Project StrikeForce novel.
Good luck with the next instalment. As you’ve successfully published a novel, do you have any tips for self-publishing for others?
Set a goal and make your word count. You can’t do anything until you get the first draft finished!

That is very true, you do need to get that first draft done. How did you feel when you got your first book review?
I felt sick to my stomach. I had no idea what to expect!

As you’re not a full time writer, what do you do for a living?
I’m the SME (Subject Matter Expert) for Intrusion Prevention Systems at an insurance company in the Midwest. I try not to put in too much hacking linger. I don’t want to go all l33t speak.

I’m happy enough to get into the l33t speak, but I think the readers may have other ideas so we’ll have to continue with the reading theme, and you can let us know your favourite authors, and whether or not your think that they have influenced your writing?
There are so many. From Elmore Leonard and Cormac McCarthy to Clifford D. Simak and Robert Heinlein. They’ve all had an influence.

That sounds like an interesting read, I will check it out. Going back in time now, what was your favourite book as a child?
As a twelve-year-old, I loved Methuselah’s Children and Time Enough For Love. I also loved Catch-22. Odd choices, I guess.

Who is your favourite literary character?
I’m quite fond of Walt Longmire, by Craig Johnson.

Is there a book that you wish that you would have written?
Ready Player One. God, I love that book.

What are you opinions on the future of reading, writing and publishing?
I think the publishing industry is in for a massive change. I don’t think the trade publishers are prepared for it.

I have to agree, technology is making major changes in the publishing world. It should be interesting to see how it develops. And now we’re on to my favourite round, the Quick Fire Round. Take a deep breath and answer the next set of questions without too much hesitation.
Do you have any philosophies that you live by?
Work just hard enough to not get fired for just enough money not to quit. Hah, no, I don’t live by that, but it sounds good.

What is your favourite quote?
I love something my Dad tells me all the time. “Everybody wants to go to heaven but nobody wants to die to get there.”

If you could steal one thing without consequence what would it be?
Renee O’Connor’s heart. I was madly in love with her when I was younger!

What’s the most unusual name you’ve ever come across?
Tijuana Hooker. Also, Harry Chin. What were their parents thinking?

Those names are unfortunate, and I agree, the parents were probably not thinking too much about the consequences. Hopefully they changed their names when they got old enough!
Finally, Is there a question that you haven’t been asked that you think I should have asked you today?
I was once asked what item I’d take to a deserted island. The answer is a cornucopia machine, because then I could make anything I needed.

I do like that question and I might use in the future, but I really like your answer. Good thinking there. Kevin, I’d like to thank you again today for granting myself and the readers a bit of insight into the mind of a successful action/adventure novelist. I wish you the best of luck for your promotion of ‘Project StrikeForce’ and I’ll be looking forward to seeing the release of the third Project StrikeForce instalment.

Want to connect with Kevin?  You can find him here: