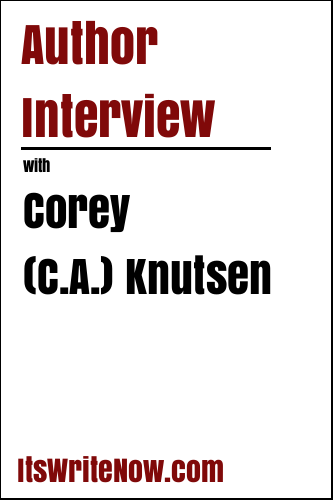 Jim Post, the wealthy leader of Compass Enterprises, is a man of mystery whose off-the-charts intellect and physical prowess have sparked uneasy whispers. Then badly-burned human remains are found in the ashes of Post’s home in rural Southwest Washington State. Jim is missing. Is he the victim? Was it murder? Post’s associates at Compass, dedicated to continuing his humanitarian mission in developing new technology, help investigate his disappearance. They’re aided by an advanced Artificial Intelligence that Post created, but conceal its existence from the police and a public not quite ready for full disclosure. When will the time be ripe for a revelation that will alter the future for everyone?
Today I’m joined by Corey Knutsen the talented author of the visionary, speculative fiction series set in the near future, the Janus Unfolding Series. Corey, thanks very much for setting some time aside today to talk about your first novel in the ‘Janus Unfolding’ series, ‘Emergence’.

You’ve created a very compelling narrative with the ‘Janus Unfolding’ series. How did the original scenes come to you?
The first scene in the book came to me in a dream. There was a grand home on fire in the forests of Southwest Washington. The home belonged to a wealthy man about whom much was said but little was known. I began writing the next day to unravel the mystery behind this man.

And this dream was how you came to know your mystery wealthy man? How did your other characters evolve?
Yes, the main character came to me in the dream. The other human characters came along as the story developed. The arrival of the one non-human, an Artificial Intelligence, was a complete surprise and much fun.

Did you try and keep the fun surprising and fun characters in the story longer?
Yes, and those stayed with the story through the second and third books of the series.

Were these your favorites to write?
The main, character, his best friend, the AI and a few others.

Do you ever dream about your characters?:
I haven’t had night-time dreams of my characters. I do have daydreams about them sometimes.

Would you like to go out socially with any of these characters if they came to life?
I’d like to have a beer with Sam, and I would love to spend more time with the mindful, gentle, Milly.

Was working with your characters the most rewarding aspect of writing this book for you?
Yes, both the development of the characters and where they took the story.

So your characters directed some of the story’s path. Did you also try and inject some of your own experiences into the journey?
Yes. The early years of the main character are spent with his grandpa in a home where my paternal grandparents lived. The story is set in Washington State with its forests and rugged Pacific Ocean coastline. The cities of Seattle and Tacoma are featured. Also, there is a town called Frazier that I modeled on a town on a bay in South West Washington.

As much as the setting is drawn from your experiences, and the characters did you find that you needed to undertake research for details to support your other solid foundations?
Yes.  DNA plays a role in the story.   I needed to find out about DNA and the science surrounding it.

Do you have a background in science to help your understanding?
I am an Engineer with an MBA education where I have a career in the energy business. This background helps with the science side of my speculative fiction writing and the dynamics of human interaction.

That’s a handy combination of technical and personal skills to have. Did this combination of contrasting ways of looking at the world influence your choice to weave themes or thematic elements into the plot?
Not always. A story calls to me and sometimes I don’t know what it wants me to say. Even when I think I know the theme, other themes rise up in the middle of writing that want to be explored.

And the themes and storyline raised in this book has continued onto additional books?
I’ve also completed, Factotum and Inheritance, books two and three in the series. I have begun a fourth book which is also set in the Janus Unfolding world.

Good luck with your progress on the fourth book. Just out of curiosity, how long did it take you to write this book?
Four years.

That is considerable dedication. Did you use any techniques while you were writing to keep you on track throughout these years?
When I’m just writing, I try to write everyday. I don’t set a goal, but continue until I’m done for the day. I do my best writing in the morning. Right now, I am spending time on promotion which has taken away from writing. That work is decreasing and I’m able to spend more time writing.

How do you write?
I compose on the keyboard. I make notes in longhand and when I get stuck I sometimes have a brief Q&A with a few of my characters to work my way out of the stuckness.

I love that idea of having Q&As with your characters. Do you also find that the editing process helps you progress with the plot?
I only edit my own work. Usually I will edit the previous day’s work before I begin writing. It gets rid of the most glaring errors and sets me back into the story for the new writing. I edit each chapter when I’ve completed it and then edit the entire book when it’s done. Sometimes I will read over chapters to re-capture the story and edit at that time. My wife edits the book and then we take it to a line editor.

Is editing the best tip you have for new authors, or do you have additional self-publishing words of wisdom to impart?
Edit. Be patient. Edit. When I completed the first book I wrote, I was amazed. I was so excited that I sent it out as an eBook. Friends and family were gracious, but it should have never gone out in the poor condition it was in. So be patient and get the book and it’s cover in good form – perfect the product.

Talking about that cover of yours, I think it perfectly compliments your work. Who designed it?
Jeff Brown, of Jeff Brown Graphics. Super creative guy and great to work with.

Now can you cast your mind back to when you received your first book review once it was a finished product. How did you feel?
Rewarded. I want this story to be read. Sure I’d like to sell a lot of books, but mostly i want people to read what I wrote. I think the themes are important and the book is entertaining. When I get a review that captures what I thought I was saying in the story that is a rewarding experience. When I find something in a review that I hadn’t thought about my story, that is also fun.

I have admit that reading the reviews of some books can be fascinating. I do wonder if sometimes other people read the same book that I did. From your experiences, where do you think the future of reading/ writing and publishing is heading?
The numbers tell us that eBooks are the future. I think there will still be people around for a long time who prefer to have a ‘book’ in their hands when they read. I think we are at an exciting time for writers and more people are able to act on their wish to write a book. Technology helps. The world of publishing is in a period of rapid change. As the path for independent writers becomes clearer and expands, and the mystique attached to traditional publishing decreases there will be more indie’s. When the author realizes that marketing is all on him, the value of a publishing house decreases, especially when that is combined with the fact that the royalty percentages are so much higher for the indie author.

There is an abundance of opportunity for indie authors. Now that you are a successful indie author who has published and received reviews, who are you favourite authors and do you believe that they have influenced your writing style?
Clifford Simak, Alan Dean Foster, Charles Sheffield, Poul Anderson, Arthur Clark, Pierre Tielhard De Chardin. I think they have influenced my style, some.

Thanks for the author recommendations there. I’ve read some of Alan Dean Foster’s work and I’m always meaning to read Arthur Clark, but I will also take the other authors under advisement.
We’ve finally reached my favourite part of the interview. The Quick Fire Round. Strap yourself in and we shall see if we can uncover a bit more about you in less than a minute.

What are you currently reading?
James H. Schmitz’s The Witches of Karres

Did you have a favourite book as a child?
I didn’t read much as a child.

Who is your favourite literary character?
Edmond Dantes – The main character of the Count of Monte Christo

Do you have any philosophies that you live by?
Love more, fear less.

What is your favourite quote?
“What lies behind us and what lies before us are small matters compared to what lies within us.” Ralph Waldo Emerson

That’s a good quote to end today’s chat on. Corey, I’d like to thank you once again for being a great sport and letting me pick your brain for a little bit today. Good luck with your promotion of ‘Emergence’ and I wish you the best of luck on the fourth instalment of the ‘Janus Unfolding’ series, and I hope to see you again in the future.

Want to connect with Corey?  You can find him here: