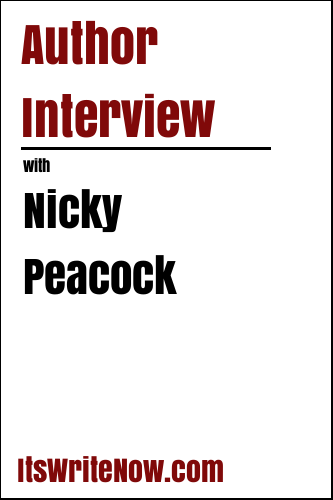 Only time will tell who the traitors really are… Sixteen-year-old Lucinda is getting the home-coming from hell. England is in the grip of the War of the Roses and her tyrant father has promised her hand to a vile man three times her age. In need of aid, she seeks sanctuary with an old childhood friend only to find him accused of treachery and harboring a supernatural secret. All too soon Lucinda is caught in a fight that’s not her own but to be with the man she loves, she’ll gladly take up arms. When you stand at Traitors’ Gate, keep the vampires close, and the zombies as far away as possible!
Today I’m joined by the author Nicky Peacock, author of the novel ‘Traitors’ Gate’. Nicky, thanks for being so generous with your time. I like the idea that you’ve playing with in ‘Traitors’ Gate’, where you have zombies, vampires and an England in the midst of The War of the Roses. Where did you get the idea to combine all of these elements together into single concept?
Traitors’ Gate is the prequel to my Battle of the Undead series. It’s there to answer some questions about the series itself, to show the readers where all the bad blood between the vampires began. The events in the book are inspired by history. I’m a bit of a history buff and, being English, the mystery of the Princes in the Tower always fascinated me, so I tied it into my story along with the War of the Rose.

So you’ve even pulled the question of what happened to the Princes in the Tower into this book. For those unfamiliar the Princes in the Tower refers to Edward V and his younger brother Richard who were allegedly trapped in the Tower of London by their uncle Richard the Duke of Gloucester after he was appointed to look after them after Edward became king at age 12. They went missing, and Richard took the crown to become Richard III. As you can see I kinda like this period of history too, and I think it’s great to see another historical layer being added to essentially give more gravitas to your story. Did you go on a fact-finding mission to make sure your facts and story gelled?
I looked into the mystery of the Princes in the Tower. It is such a sad chapter in our royal history and shows that, even being born of noble blood back then, you were never truly safe.

So the idea of being safe was one of the motifs of this book. Did you set out to include messages like this in the storyline?
Yes, very much so. A book without a theme is like a boat without oars. It will float, but not actually go anywhere which will eventually frustrate the reader. I always have a theme in everything I write, a message that I want the reader to find, like a literary treasure hunt.

That’s a great concept. Did you add any personal details from your own life to this treasure hunt?
My life is pretty darn boring, so not really. The protagonist Lucinda definitely has aspects of my own personality in though, as do all my characters.

*Laughs*. I love your honesty about being boring, but I think that writing and reading are great was to escape boredom or the day-to-day drudgery. How did Lucinda and the other supporting characters develop?
Most were drawn from the other two books in the series, Bad Blood and Bad Timing. It was only Lucinda who was new to the party. As a writer, characters tend to be a cocktail of parts of the author’s own personality and traits you need to get them through your story, so Lucinda is open-minded, brave, and looking for love.

I won’t ask any question that might give away Lucinda’s progress looking for love, but are there any characters in the novel that you personally would like to go on a date with?
Probably Philippe. He’s a true gent and a real flirt so would be fun to spend time with. He’d also pay for the beers and buy dinner too! LOL

He does sound like fun. Was Philippe the character you wanted to spend more time with, or did you have another character you connected to strongly?
I really enjoy spending time with Nicholas. He comes off pretty badly in the other books, so it’s nice to get the chance to show a different side of him and explain to the reader why he does what he does.

Do you ever dream about your characters?
No, I think my mind spends too much time with them when I’m awake!

And when you are awake and working with your characters, what does your working environment look like?
I try to write outside my home, so go to local pubs, cafes etc. I find I have less distraction and can get some nice food and drink at the same time :)

That’s a good strategy. Do you write longhand, or do you risk your laptop’s life by taking it to pubs and cafes where the spill factor is increased?
I type, takes less time and I’m pretty quick at it.

Was the end-to-end process of creating this book also pretty quick?
It’s a novella, so only a few months. It was the research that took the most time, although I think that was because I seriously enjoyed that aspect so lingered on it more than I should have :)

Did you also linger in the editing process as well to give yourself some covert opportunities to re-do research?
I’m a bit OCD with editing. I have a seven step system where I check for something different each read through, for example: grammar, consistency and character. My publishers also have great editors that work with their authors, so I know that my work is spot on by the time it reaches the readers.

And how was your cover decided?
The publishers have designers that put together the book covers. They give me a lot of input though which I really appreciate – the cover is so important to the book.

Do you still have any tips for self-publishing for other authors?
I’m guessing our issues are going to be eerily similar! Just get out there and promote yourself, it may take some time, but the more you’re in reader’s eye-lines the better.

And when you got in your reader’s eyes and got your first review, how did you feel?
It was a positive one, so I felt great! Obviously every author gets bad reviews too, but you have to remember that you can’t please everyone – so it’s best to be true to yourself.

Is being true to yourself the most rewarding aspect of writing this book, or were you struck by something else?
I loved the research into the era. The 15th Century was such a turbulent time in British history and I enjoyed delving into it. I also adored giving my character, Nicholas more of a back story to why he is how he is in the series.

Are you one of the lucky ones who gets to write your next project full time, or do you have a day job?
I work in sales and marketing. It helps for the promotion side of being an author, but my dream is to write for a living.

That is a fantastic dream and I hope it comes through for you. Has that dream and perhaps your writing style been fuelled by your favourite writers?
So many authors! And they change depending on my mood. For horror, I read Poppy Z Brite or Richard Laymon. For Paranormal Romance I read Kresley Cole and Christine Feehan. For Urban Fantasy it’s Keri Arthur and Patricia Briggs. For YA it’s Kiera Cass and Cassandra Clare. I try to keep my style my own, but obviously outside influences will also squirm in there. So, I try to keep my tastes varied in my genres to stop this.

For instance, what are you currently reading?
I’m reading The Wizard of Oz by L. Frank Baum. It’s research for my new book in The Twisted and the Brave series, The Assassin of Oz. I’d never read it before, and it’s surprisingly different from the movie adaptations.

So you didn’t come across that book as a child. What was your favourite read when you were little?
Interview with a Vampire by Anne Rice. Beautiful, disturbing and was the first book to make vampires protagonists rather than just straight up monsters.

Is your favourite character from that book?
Again, this changes depending on what I’m reading. Recently its Katniss from the Hunger Games. She had such heart and courage.

Is there a book that you wish that you would have written?
Anything that made a bucket of money! Only kidding (I’m not really) I think that book is still in me, and it’ll come out one day and change my life for the better.

Good luck finding that book. For your sake, and that of the readers I hope that you can find that. Tangentially, do you also think that the publishing industry is changing for a better future?
I feel it will be much the same as what’s going on now. It wasn’t that long ago that doomsayers declared print dead and that the eBook would swallow the industry whole. That apparently hasn’t happened. I think there’s plenty of room for readers to have both print and digital in their lives.

I agree, it will take a long time to eliminate paper books. But I do love the rise of the Kindle books. Now, finally now we’re on to my favourite section of the interview process, the Quick Fire Round. Just answer the next questions as fast as you can:
If you could breed two animals together to defy the laws of nature what new animal would you create?
A wolf and a Komodo Dragon.

Do you have any philosophies that you live by?
If you fall, get back up again – and hope no one recorded it to put online!

Great amendment to a classic phrase there. Can you stand on your hands unassisted?
Not even if I were assisted!

If you could steal one thing without consequence what would it be?
The heart of the man I love…Actually, no it would be money, lots and lots of money.

What is your favourite quote?
“Insanity: doing the same thing over and over again and expecting different results.” Albert Einstein

Can you curl your tongue?
Yes.

Which are cooler? Dinosaurs or Dragons?
Dragons.

What’s the most unusual name you’ve ever come across?
I heard a mother shout at her child in a bookshop once, “Canoe, have you read Harry Potter?” I’m hoping I misheard and it was actually Keanu!

I agree, I really hope that Keanu was the name being called out too. Finally, is there a question that you haven’t been asked that you’d like to be, or anything that didn’t come up?
LOL, I’ve done a lot of interviews so pretty much been asked everything under the sun!
I’m glad that you think that most of the basics have been covered. Thanks again for joining me today Nicky, and I wish you the best of luck with your promotion and your progress on your upcoming work.

Want to connect with Nicky?  You can find her here: