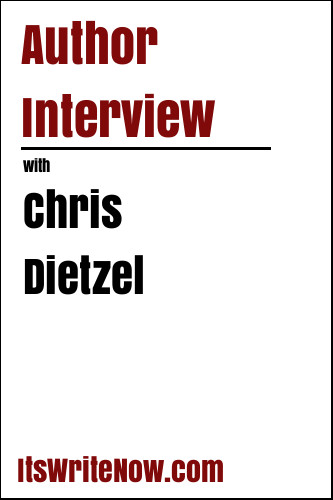 Leaders who rely on war and fear. The men and women who refuse to accept a tyrannical government. And an unreliable means of time travel in which most people don’t survive. Welcome to the nightmarish future of The Theta Timeline, where ‘1984’ meets ‘Slaughterhouse-Five.’
Today I’m chatting with Chris Dietzel, the author behind the dystopian sci-fi novel ‘The Theta Timeline’. Chris, thanks for joining me today, I appreciate that you’ve set some time aside for us to discuss it. Now, let’s kick off today’s interview by going through what sparked your idea to pursue writing this tale?
It arose from being a huge fan or Orwell’s 1984 and then seeing all of the things the NSA was doing as part of the Snowden revelations.

That is an striking combination and I can see how pondering those thoughts could have led to you working on this story. Because you were deliberating on these topics it seems to me that you would have had a strong push to include these themes in your book. Is that correct?
Very much so. In this book, there are the themes of free thought being dangerous, governments using fear to get their way, and the ever-growing power that governments have in our daily lives.

As you were working through these ideas did you undertake much research about how these concepts are being played out?
Yes by following the news and the way it slanted the Snowden revelations and watching the government go after Snowden instead of correcting its massive overreach of power.

These are very heady topics. Did you also try to inject aspects of your personal experiences in to bring the ideas back to the reader?
Yes, loving ‘1984’ and seeing the state of the world.

You’ve admitted that ‘1984’ was a significant influence on this story. Do you think that any other authors, apart from Orwell have also had contributing influences on your writing.
Orwell, Steinbeck, and Vonnegut have all been a huge influence.

For you what was the thing that you found most rewarding from writing this story?
In the same way Orwell said that he didn’t consciously attempt to write against abusive government until he wrote ‘Animal Farm’ and then ‘1984’, this was my first conscious attempt to wrote something that could follow in ‘1984’s footsteps.

Yes, trying to write something to follow in the footsteps of 1984 would be incredibly rewarding. How long did it take for you to work through all of these concepts and weave your story?
It took just over one year to write. I immediately wrote a follow-up that takes place in the same world as this book but has a completely different set of characters and storyline.

That sounds great. I look forward to seeing it’s release. Have you started working on another project after these projects?
Another dystopian closer in line with Animal Farm than 1984.

Are you lucky enough to be writing full time?
I used to work a 9-5 job that I hated. Now, I’m a part time (very part time) consultant spending almost all of my time writing. The dream is to be able to write 100% of the time.

That is the dream for many and it sounds like your are getting incredibly close to it. As an almost-professional writer, how do you attack the editing process?
I edit the books myself three times, then send them to a professional editor.

And how did you go about getting the cover that binds it together designed?
An amazing designer named Levente Szabo designed it.

I have to agree, that design is amazing and it really does justice to your plot. I’d like to thank you again Chris for taking some time out of your busy schedule to catch up with me for an interview. Good luck with your promotion of ‘The Theta Timeline’ and I hope to catch up with you again in the future to discuss your next book release.

Want to connect with Chris?  You can find him here: