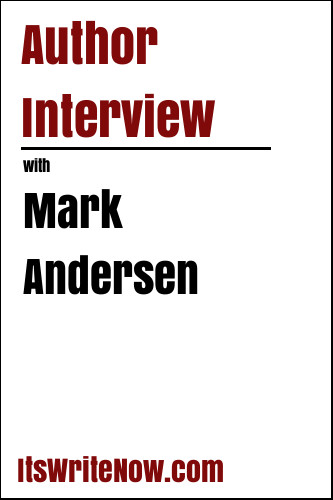 Where in Texas has King Arthur gone? In this contemporary fantasy, Merlin the magician slept for fifteen hundred years…until his mystical connection to the mind of legendary King Arthur awakens him. Finally, the time has come to find the lost king and return him to his ancient destiny: saving the Britons in their hour of greatest peril. The quest leads Merlin to Houston, Texas, where his link to Arthur becomes hopelessly tangled. The snarl centers on Alfred, a laid-off engineer suffering his own existential crisis. After Merlin coerces his help, they follow their only clue to a suburb called The Woodlands. As they unravel the secrets of Arthur’s present life, returning the king to to his own time becomes harder. Now Merlin must find a way to reconcile free will with fate—and repair history’s tapestry.

Today I’m joined by Mark Andersen, the author of the intriguing cross of our modern world with the round table in ‘Merlin’s Knot’. Mark, thank you so much for joining me today. I like the idea of crossing these two seemingly unrelated worlds to get a single narrative. What inspired you to make this hybrid?
The opening scene came to me during a writer’s seminar. An old man, looking like a drunken bum, approaches another man leaving a career center in contemporary Houston. The bum says “I’m Merlin. You must help me.” The idea intrigued me: why was Merlin there? Where is King Arthur? How would a 6th century druid mage react to our society? The answers took me to places I didn’t expect to go.

The question of how druid from the 6th century would operate in today’s world is a great question to really answer. How did you main characters form with questions like this at the base?
The two main characters, Merlin and Alfred the POV character, came in the initial vision of the opening. I wanted to avoid making the Arthur character an obvious heroic king, so I put a twist into his role. To create one of the roles (read the book to find out who this is), I had to go into my heart of darkness and figure out who and what she was.

And did you have a clear favourite or characters who just wouldn’t stay away?
Yes. I’ve written a second book to explore the results of the climax of the first book. Each stands on its own with a true beginning and ending, but they definitely are companion pieces. The second book, Merlin’s Weft, will be published later in 2016.

Good luck with your progress on that novel, I hope that it is going well. In your time writing either the first or second book in this series did you feel like you could just go out and socialise with the characters?
Yes, of course. But I feel as though I’ve already done so in the process of writing the book. They told me about themselves and, in some cases, took me places I didn’t expect my characters to go.

Did they ever take you to your dreams?
I daydream about most of them. That’s often how I figure out what they will do in the next scene. They don’t usually visit me at night.

When they do visit you do you consciously think about the ideals or motifs that you want them to be addressing?
Yes. Fate vs free will. Good vs evil. Identity. All these and others play an important role in my books.

Do you also try and meld in situations from your own life to ensure there was enough realism in the story?
Although the point-of-view character is not my avatar, I first began this book shortly after I had spent an extended period out of work. Some of his frustrations in finding a job came from my experiences.

And I’m assuming that you needed to do some research to make sure the character of Merlin was accurate.
Yes. I have perhaps 6 feet of resource material in my bookshelves relating to the post-Roman Britain, including discussions of historical evidence for King Arthur.

That’s impressive, you’re very well read on the subject then. Did you find the research the most rewarding aspect of writing the tale?
A number of chapters take place in Arthur’s time (5th-6th century AD). Writing those chapters provided a pleasant contrast to the contemporary tales. That difference delighted me.

I like that idea of having a mix of times in the story. Did it take you a long time to fuse the characters, research, motifs and personal inflections into a single narrative?
Calendar time: about 12 years. I had a day job writing, which eventually took my creative energies away from writing the story. Writing time: excluding the times I didn’t write at all, the story came together in something around a year, then I spent months and months editing.

It really always seems to come back to editing. Do you like editing your work?
I rework my stories many times. My “day job” for eleven years was as a writer and editor (and for nine of those years, executive editor) of a science and technology journal. I appreciate the value of well-written words. I also work with an editor who has experience in the fantasy genre, and her contributions have been key to the final quality of my work.

A great editor always helps, but I’m sure your experiences as a science and technology writer were invaluable also contributes to the quality of your work and colours your writing.
I am now retired, but I worked for 33 years as a research scientist and engineer (not counting the time in grad school), spending eleven of those as a science writer. Scientists must be open to unexpected possibilities, but then must use rigor to establish their veracity. That is much like the writing of fiction: come up with interesting premises, but be sure the world you create is self-consistent. The time I spent writing for the technology magazine reinforced my desire to write clearly and gave me tools to do so. It also taught me the importance of working with an editor who focuses on the words.

Is your main writing technique to find and editor that focuses on the words, or better yet do you try and focus on the words, or do you employ other strategies?
I am able to write every day, but I also spend days being a retiree and enjoying other aspects of my life. I usually write in the afternoons and into the evening because I’m not a morning person. I have a study that overlooks my neighbor’s tree-filled back yard. I try to write 2000 to 2500 words a day.

That’s a reasonable daily target. Do you do that longhand or type?
I type. I have trouble reading my own hand-written grocery lists.

*Laughs* I’m sure you’re not alone there. How did you go about finding the right design for the book cover?
Blue Harvest Creative did the design, based on ideas I provided. They made the cover better than I could have imagined.

I agree, they’ve done a great job. Now, you mentioned earlier in the interview about the sequel to this book. Can you let the keen readers know the current stage of the sequel?
Merlin’s Weft, the sequel, is in final editing and will be out later this year. I have plot ideas for a third book in the series, but currently I’m working on an epic historical novel set in the time of the Three Musketeers. That story is about 90% done, then the glorious process of editing it will begin.

You have been busy! With your progress writing have you run across any self-publishing tips for other authors?
I’m still learning, so I wouldn’t try to advise someone else beyond the basics: put out a well-written, quality book that you are proud of.

And what is your top tip overall for authors?
Write your story, then get started on the real work.

Do you have any views on the digital reading and self-publishing phenomenon?
People like to read and will continue doing so. There will remain a place for traditional publishing companies, but they will (and already do) focus on the sure sales. For the rest of us, independent or non-traditional paths are less frustrating.

You’ve mentioned that people like reading, how about you? Who do you like to read?
I had a lot of difficulty the first time I read Tolkien’s trilogy, but I’ve read it about once every ten years since I was in college. The greatest influence on my writing has come from Strunk and White.

What are you currently reading? Are you currently in your Tolkien reading phase?
I’m reading quite a bit of contemporary fantasy. I’ve been focusing on a lot of independent writers recently.

When you were little what was your favourite book?
A Fly Went By. I reread that countless times before I started school.

I haven’t read that one, but I will have to check it out. Do you have a favourite literary character?
Right now, Milady from The Three Musketeers is the object of my fascination. I like Thomas Covenant from Steven R Donaldson’s chronicles.

Milady is not a bad choice. Has there been a book that you wish that you would have written?
I’m still writing books that I enjoy writing. This seems like a question to ask me on my deathbed.

It’s not a deathbed question, I just like to see if it sparks authors to go out and write something that they have been putting off. And now we’re onto my favourite segment of the interview. The quick fire round, just answer the following without hesitation.
What is your favourite quote?
“What I tell you three times is true” From Carroll’s The Hunting of the Snark.
How did you feel when you got your first book review?
Excited.

Do you have any philosophies that you live by?
Nothing that rises to the level of philosophy. Treat people right.
Very good advice. What is your zodiac sign?
Libra on the cusp with Scorpio.
What is your favourite word?
Onomatopoeia

If you could steal one thing without consequence what would it be?
Mister Peabody’s Wayback Machine (or WABAC machine). Then research for my next book would be a snap. “Set the Wayback machine for the masked ball when Buckingham first saw Queen Anne.”
That sounds like a lot more fun than book or internet research too. I hope that you manage to get a hold of that Wayback Machine. What is your favourite line, quote or statement from your book?
In response to another fantastical explanation from Merlin, Alfred says: “Oh. Now everything is crystal clear.”

What is your favourite quote from another author?
“What I tell you three times is true” from Carroll’s The Hunting of the Snark.
Now, finally do you feel like I’ve missed asking you an important question as a part of this interview?
“Why do you spend so much time editing when you can get your story out much more quickly?” I don’t want to turn readers off my work because of stupid errors in the writing or the layout. Not everyone will like my stories, but they shouldn’t be distracted from the tale by niggling mistakes.

That’s good advice and a great answer to that question, I agree it’s very easy to be sidetracked reading something with significant obvious silly errors. Mark, thanks again for joining me today and I wish you the best of luck with this book promotion and the completion on your upcoming release later this year.

Want to connect with Mark?  You can find him here: