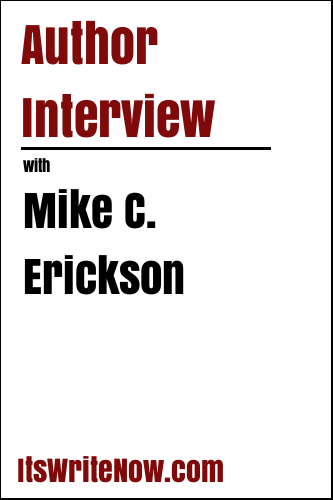 Today I’ve managed to snag just a few minutes of time from Mike C. Erickson, the author of the political satire ‘Pianist in a Bordello’. Mike, thanks for joining me today, I really appreciate that you’ve set aside even a few minutes from your schedule. If you only had one sentence to describe your book to whet a reader’s appetite, what would it be?

What would happen if a politician decided to tell the truth — the whole truth?

A politician telling the whole truth! That’s quite a concept! How do your characters deal with this?
Richard Youngblood, aspiring Congressman, is about to find out. He’s running on a platform of honesty and transparency — and against the advice of his friends and advisers he’s decided to start with himself. His autobiography will lay his entire life bare before voters just days before the election.

What are some of the secrets from his past that he reveals through his autobiography?
What a life he’s had! Born in a commune and named Richard Milhous Nixon Youngblood as an angry shot at his absent father.

Oh no, that name alone is a challenge in itself. How does his life unfold?
Richard grows up in the spotlight, the son of an enigmatic fugitive and the grandson of a Republican senator. He’s kidnapped and rescued, kicked out of college for a prank involving turkeys, arrested in Hawaii while trying to deliver secrets to the CIA…Dick Nixon Youngblood’s ready to tell all. He’ll even tell his readers about the Amandas — three women who share a name but not much else, and who each have helped shape and define the man he’s become.

*Laughs*.
Are voters really ready for the whole truth? Are you? Pianist in a Bordello is a hilarious political romp through the last four decades of American history, from a narrator who is full of surprises.

In the narration of your story, what do you feel is your favourite line from your book?
California

She’s done a great job with it. Mike, thanks again for setting aside this short bit of time to discuss your book. I’d like to wish you the best of luck for your promotion, and I hope that we have enticed some more readers to discover the story of Richard Milhous Nixon Youngblood.