Author interview with Kelly Stone Gamble of ‘They Call Me Crazy’ 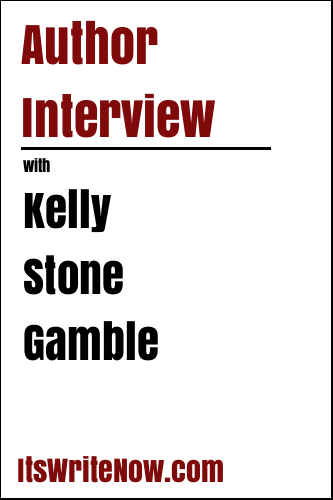 Cass Adams is crazy, and everyone in Deacon, Kansas, knows it. But when her good-for-nothing husband, Roland, goes missing, no one suspects that Cass buried him in their unfinished koi pond. Too bad he doesn’t stay there for long. Cass gets arrested on the banks of the Spring River for dumping his corpse after heavy rain partially unearths it. The police chief wants a quick verdict—he’s running for sheriff and has no time for crazy talk. But like Roland’s corpse, secrets start to surface, and they bring more to light than anybody expected. Everyone in Cass’s life thinks they know her—her psychic grandmother, her promiscuous ex-best friend, her worm-farming brother-in-law, and maybe even her local ghost. But after years of separate silences, no one knows the whole truth. Except Roland. And he’s not talking.

Today I’m chatting with Kelly Stone Gamble, the author of ‘They Call Me Crazy’, the first installment of the Cass Adams series where crazy and mysterious circumstances meld. Kelly, thanks for setting aside some time today to chat about your book. What was the genesis of the tale where Cass dumps her husband in a koi pond?
I was sitting in a bar, watching a show about building koi ponds. I commented to the bartender that they looked like graves to me. He said, “well, if that’s your story.” That night, it became my story!

And what a story it is. How much of your story has been extracted from your own life?
Several pieces. However, I’m not sure I’m willing to tell readers which experiences in the book were from my own life experiences. My characters do some pretty crazy things!

Let’s keep it a secret I personally prefer the mysterious allure. Your characters are doing an array of crazy deeds throughout the story. Was it your intention for them to address specific themes why they were up to their exploits?
Not really. I think certain themes develop as the characters themselves develop.

And how did the characters develop?
We hear a lot in the news where someone will commit a crime and then when those close to them are interviewed, several say things like, “we knew he/she was a little strange, but we never really expected them to do THAT…” That’s where my protagonist, Cass Adams came from. How did all of the people that knew her not see this coming?

And the things that Cass is doing are bizarre. I expect that you needed to do some investigation into some of the things that she was up to so that the story rang true. Is this correct?
I think with any book a certain amount of research is involved. For They Call Me Crazy, I had some interesting research assignments. For example, one of my characters is a worm farmer, and I had to learn a lot about worms and worm farming in order to make him realistic.

That’s a pretty neat assignment. Now that you’ve worked with all of these characters do you have a favourite?
I love Cass Adams. She says whatever comes to her mind, has no filter, doesn’t care who she offends, and never lies. She is so much fun to write!

She kind gets to do and say what we think sometimes but for proprieties’ sake can’t act on. That would be fun. Would you want to go out for a beer with Cass?
I’d like to have a beer with all of them!

Have you ever dreamt about your characters?
I’ve never been asked that before, but no, I can’t say that I do.

Was working with the characters one of the most fulfilling aspects of writing this novel?
What has been most rewarding for me has been the reception this book has received from readers. It covers some serious subjects, but it’s a little crazy, too. I’ve had readers from all over the world send me crazy pictures of my book doing some unusual things. It’s been a lot of fun seeing the reader interaction and their love for my work.

That’s fantastic, and to see the reader interaction like that is even better. How did your first review pan out for you?
Since my first review was a good one, I felt great!

That must really help keep you motivated with the next installment. Apart from that motivation, is there anything that you do to get you into the writing groove?
I write at night, when no one else is around.

Do you get much traction writing this way without distractions? For instance how long did it take you to write this book?
It took me 17 days to write the book, and two years to edit it. I knew the story, got it all on paper, then went back and made it a book.

Wow, that’s a incredible timeline. I can’t say that I’ve interviewed anyone else with such a short writing period alongside such an extended editing period. What are you doing during the editing process?
I edit until my eyes bleed. Then, I send it to a private editor before I submit it to my publisher. Once the publisher has it, it goes through content, line, and proofreaders.

That is impressive. Does you publisher take care of the book cover?
Yes, Spotlight Graphics is the company that my publisher, Red Adept Publishing, uses.

Now I mentioned earlier that They Call Me Crazy the first of a series. Can you tell us a little about your progress with the rest of the series so far.
Call Me Daddy, which is a sequel to They Call Me Crazy, will be released on October 6, 2016. I’m currently working on the final book in this series, Call Me Chief.

That’s very exciting that any reader who picks up this novel today won’t have to wait long to follow Cass’s misadventures. Now we’re onto my favourite section of the author interviews, the quick fire round where a mix of crazy and not so crazy questions are fired at will at the author of the day. Kelly don’t get hit!
Who is your favourite literary character?
Dirk Pitt. We are about the same age, so I feel like he is an old friend that I grew up and grew old with. He had a much more adventurous life than I have, but, I had a lot of fun reading about his adventures.

Do you have any philosophies that you live by?
I don’t believe in growing old and I refuse to grow up.

What is your favourite quote?
“To succeed, the artist must possess the courageous soul..the brave soul..the soul that dares and defies.” –Kate Chopin

Can you stand on your hands unassisted?
I just tried. Nope.

Can you curl your tongue?
No.

Which are cooler? Dinosaurs or Dragons?
Dragons

Kelly, thank you again for joining me today and I wish you the best of luck with the promotion of They Call Me Crazy and the progress with the next instalments in the series.