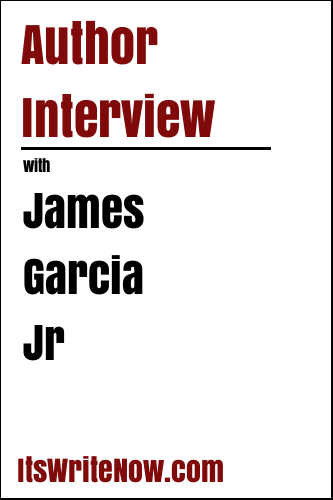 Nathaniel saved Barbara Lopez from another vampire, but did she really save him? Nathaniel has often wished for death, wondering why God allowed this punishment: to walk the earth undead and unable to be redeemed. Does God remember the little boy from Romania who watched his parents die, was raised by the murdering vampire, only to become one himself? What does God think of Nathaniel and could there yet be redemption for one outside of heaven? God & the Devil have been at war from the beginning Now they’re using vampires.

Today I’ve managed to snag some time from James Garcia Jr, author of the novel ‘Dance on Fire’. James, thanks for joining me today. Your book is a bit of a different twist on the traditional vampire tale. I won’t give anything away, but I’m hoping that you can explain it a bit more for the audience and let us know that were the initial seeds behind it?
The book’s beginning was very unlikely. My dad is a retired police officer, and the book was just going to be a crime thriller. I had two officers on a lonely small town street corner in the middle of the night. I was the most surprised of all when a vampire came walking out of the shadows. Even twenty-plus years ago when I first started the book I thought we needed another vampire story like a hole in the head. *laughs*. The book was guided by my own struggle as a Christian man, writing horror. What might that look like? It’s edgy or crossover, but it is good versus evil – the oldest struggle of all.

I really like that you’ve put this different twist on the traditional vampire tale, and I really like how you are attempting to address in your own way that struggle of good versus evil. Is seems to me that you consciously decided to include these themes as a strong aspect of your novel. Was this your intention when you started writing?
In the beginning I couldn’t shoot that high. I had to make sure I could just write something with a beginning, middle and end, you know? *Laughs*.

*Laughs*, I’m glad that you got over that hurdle.
Seriously, I don’t know. I suppose the answer is yes. On the other hand – four books into this journey, I still feel like the stories already exist on some other plane, and all that I do is catch them and write them down.

Do you do anything in particular to get the storm of ideas brewing so that you’ve got something to catch? For example do you run through your past experiences as a starting point?
Yes, there were a few things that were borrowed. There’s a few moments where what the characters did came from my life. Nothing to do with blood-letting or murder, of course.

I’m glad to hear that you don’t have a large experience with either of those topics. That comforts me. As you don’t have experiences of things like these, do you feel the need to research so that you have an accurate portrayal in the storyline?
I typically leave the research until the end. Getting the story down on paper is the most important thing. If I’m completely clueless about some part, then I will stop and do some research.

Do you editing a more important milestone than research?
Yes, I do. The last step in the process before I send it off to the professional editor is to lock myself in my bedroom and read the entire thing aloud. It’s my least favorite step of the process, but it does seem to work for me.

Don’t mess with what works. Do you also put your hand into the cover design process?
The incredible Maria Zannini has done all of my novels. She’s fantastic and very talented.

Now that the book is finished and you sit back and reflect on the process and finished product, what jumps out in your mind as the most gratifying element of this book?
I started writing the book when I was young and in college. Then life got in the way and the book was set aside – for twenty years. The most rewarding thing was to come back to it all of those years later and actually see it completed. I never thought I would see my name on the spine of a published novel.

Has having your name on a published novel inspired you to start writing another novel?
Yes, I’m working on another ghost story. I’m a Hispanic male, writing a black female lead in a female-heavy plot. I’m working on the outline at the moment, but I’m very excited to get started.

I think you’ve set yourself a formidable challenge there. Good luck with it. Do you think that you will get this one finished in a shorter period of time than your last novel, or do you think that life or your work might get in the way again?
I was just recently promoted to Safety Manager at my day job. It’s a big job for a large company, and it has really taken all of my time. Finding the time to write has not come easily. Hopefully it will become easier very soon.

It sounds like you have some plans to steal some time there. If you could steal one thing without consequence what would it be?
A world series championship for my beloved Chicago Cubs. *evil grins*

That’s an impressive theft there and I think that working on that would keep you busy for quite a while. Do you have a favourite line from your book?
“He is the great beast,” Nathaniel said. “There is nothing that he is incapable of.”

Nice, and for my final question today, do you have any tips for other authors wanting to self-publish their own works?
My tip for anyone who has a dream is to chase those dreams! Have no regrets!

That’s a great tip. James, thanks again for joining me today and I’d like to wish your the best of luck with your promotion of ‘Dance on Fire’ and chasing down the storyline for your next book.

Want to connect with James?  You can find him here: