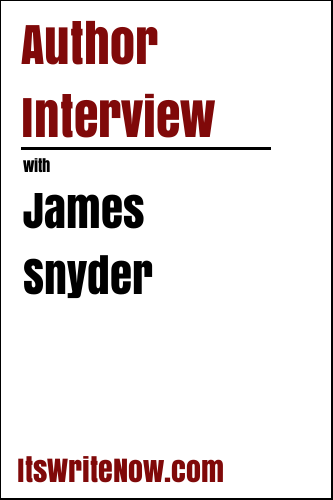 Three escaped convicts and a runaway girl search for a hidden fortune in stolen military payroll, while being pursued by a nationwide police manhunt, an enraged ex-husband, and a psychotic prison investigator bent on revenge.

Today marks my second tête-à-tête with the author of the thrilling, suspenseful ‘Desolation Run’, James Snyder. James, thanks for joining me today and I appreciate that you’ve come back to chat again. Back in July when we last caught up we discussed ‘The Beautiful-Ugly’. Now you’re promoting your novel ‘Desolation Run’. What initially stirred you to pursue the manhunt that is ‘Desolation Run’?
It began with a road trip my daughter and I made into Southwest Texas. I already had some ideas for the story floating about in my head, but seeing that unbelievable country gave it the setting it needed to take off. My daughter’s an amateur photographer and artist, by the way, and one of her photographs became the template for Desolation Run’s book cover. Amazing country and amazing history to back it up.

I’m glad to see that your daughter is back influencing your work. In our last interview you mentioned that her birth was your inspiration for ‘The Beautiful-Ugly’, I like seeing that she’s now moved into the artistic side. Did you enjoying delving into the history behind this road trip?
I research all of my novels extensively. The research usually takes me longer than the writing. Sometimes it’s even more fun. The downside is that I don’t get to read as much fiction as I’d like, because I’m reading so much other stuff.

There’s no such thing as reading too much. Were you able to ease off the research for this book and use many of your own personal experiences too?
Oh, yes. I prefer not to give all the details, but much is taken from life experience, including traveling the route my four lost souls took across America. I will say, however, Cade is an entire fabrication, maybe from the darkest parts of my psyche. Never came face-to-face with anyone like him, which I’m fine with.

How does a darker character like Cade come to you?
Sometimes from narrative need and sometimes straight from themselves just appearing full-blooded and knowing they were right. Creating and developing characters is always a mixed bag. But ultimately you have to keep honing them to get them right.

During that process of honing your characters, did you find one or two that you connected with more than the rest?
I loved them all, but Oreny Johnson was fun to hang around, and, of course, Cade was mesmerizing to me, as a villain, of course.

As the villain did your consciously put Cade, or any other of your characters for that matter into challenging positions to get them show their natures for a larger moral or dramatic purpose?
Not really. I always begin with characters or story or both and, if those are good enough, I feel the themes will develop honestly as it goes along.

That technique really relies on trusting the strength of your characters, which I think is good because it would further hone those nuances and temperaments of the characters which ultimately strengthens the book. Now, last time we discussed the possibility of a cast party if your characters could be granted the gift of life. Would you like to have a cast party this time around?
Yes, I’m sure they would all have something to say over a beer.

Once your metaphorical cast party has wound down and it’s just you again, what do you reflect on as the most satisfying aspect of the chapter in your life that has been this book?
Hopefully achieving the initial literary goals I had in mind at the outset.

I won’t push you on the details of those goals, but I hope that you feel that you’ve accomplished them. Now finally to round out today’s interview I do have obligation from our readers the ask whether or not you’ve uncapped your pen towards the creation of another novel? Are you currently working on anything?
A gilded-age historical thriller, set in New Orleans and elsewhere.

I’m pretty keen on the gilded age myself, quite a time of technology and change and toss that in with the scene from New Orleans and I’m up for it. Keep me posted with the progress and come back and discuss it with me when you’re done! James, thanks again for taking the time today to sit down with me. Best of luck with your writing foray and today’s promotion of ‘Desolation Run’.

Want to find out more about James Snyder? Connect here!