Author interview with C.D. Gallant-King of ‘Hell Comes to Hogtown’ 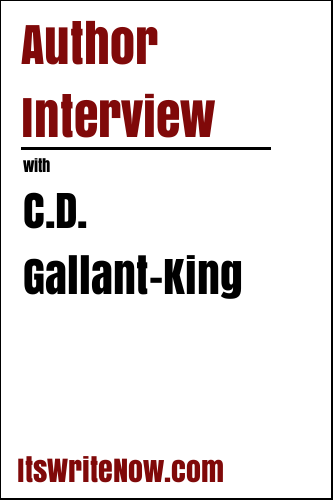 For today’s interview I have managed to snag some time with C.D. Gallant-King, the author of ‘Hell Comes to Hogtown’ which is another of the books part of the 2016 Vampire Books for Blood campaign. C.D., thanks you very much for spending some time with me today to discuss your book. To entice the readers to pick up a copy of your book in October can you whet our appetites on the highlights of what happens in Hogtown?

Hogtown is a horror comedy about two losers who get involved in a paranormal mystery and wind up in way over their heads. The protagonist, Fitz, is an awkward, socially inept underachiever whose life is turned upside down when he encounters a beautiful woman in a comic book store. Through twists and turns completely outside his control, the chance encounter ends up getting him implicated in a murder and kidnapping plot involving the prime minister’s family. His best friend Dee – a narcissistic, drug-addled professional wrestler – winds up dragged along for the ride. In addition to the cops and the feds on their tail, Fitz and Dee have to deal with an even more dangerous threat: a drunken, demonic hobo with a taste for blood.

You’ve really got it all in there. A touch of mystery, characters who may not be able to handle the situation they find themselves in rounding off nicely with a taste of blood. How did the underlying threads which wove themselves into this novel develop? Was your thinking clear at a very early stage of writing?
There were three distinct ideas that came together for this book: One, I wanted to write a “paranormal mystery/thriller” type of story, but with the protagonists as losers and weirdos, sort of like an adult version of “Scooby-Doo.” Two, I had an idea for a weird, monstrous villain that peeled away the romance sometimes associated with his kind of monster. Three, I saw a few very distinct characters I wanted to use – namely the comic book store manager and the narcissistic wrestlers – and wondered how I could mash them together. I had all of these distinct ideas for years and I didn’t know that I would end up using them together, but they ended up meshing well.

When you were meshing all of these ideas together did you find the use of tropes or motifs an easy way to bind everything together?
Not when I start writing, no. But as I write, a theme will usually become apparent so I will go back and try to weave it in. If the plot and characters are sound, themes will start to emerge on their own, and so I will nudge it along to bring it to the forefront and tie the story together.

Was the locations that you used another element that you found useful to solidify the storyline?
Hell Comes to Hogtown is set in the city of Toronto (in fact, the title, “Hogtown” refers to one of the city’s nicknames).

Really, I didn’t know that. Funnily enough that doesn’t surprise me that it’s not written in the tourist brochures. Have you spent much time in Toronto?
I spent my twenties in Toronto and love the city, so I think that comes out in the writing. The characters visit many real places (or homages to places) that I visited and frequented myself. I wanted the story to have a distinct setting and voice – so many of these types of books are set in American cities like New York or Chicago, and I wanted it to be different. It only made sense for it to reflect my own experience.

I really like it that you set out to create a distinct voice for Toronto, it’s so easy to fall back on those big American cities even for people who don’t live there so taking that stance is important. Now, since you were writing to reflect your own prior experiences did you do have any tricks when you were writing to take you back to the mindset of those past experiences?
I have weird writing habits. Hell Comes to Hogtown was written almost exclusively on the bus during my very long commute, with my laptop perched precariously on my knees. I don’t have set times or word count targets, I just write as much as I can during those time frames. It’s a slow and arduous process but it works, but I actually find it works pretty well. With my headphones on and my head down, there are few other distractions, and it’s a very effective use of time that could otherwise be easily wasted.

You’re braver than I am writing on the bus! With the bus drivers around here I’d be too concerned about an immediate stop and ending up with a very expensive doorstop. But if you can do it on the bus that is fantastically efficient, it’s almost like stealing time. If you could steal time would you do it?
Yes!

I think that would be awesome too. Do you also edit on the bus for efficient time use?
I do some editing myself (well, quite a bit) but you really need a second set of eyes to really help you bring it together, not just for spelling and grammar but for the big picture. No matter how many times I go through it myself there will always be things I don’t see that could be better. My wife is my Alpha reader, who is not afraid to tell me what’s good and what’s terrible and needs to be cut. With Hogtown I also worked with freelance editor Amy Allen-Macleod who really helped me polished it to a finished product.

Do you also get another set of eyes in for your cover artwork, or do you work on that yourself?
I mostly designed it myself, but the artwork was provided by freelance photographer Jason Salvatori. It’s a wonderful custom photo that he did just for the book, which I think is a huge plus as I will never accidentally find my clip art cover image used for something else. It’s distinct and evocative and I love it.

Do you have one line from your book that you feel carries that distinctiveness of the book?
“I’m not getting caught with a dead girl on the roof of my car again.”

*Laughs*. I think that pretty much fits the bill. I won’t ask anything more about it as it will spoil the intrigue for readers. Do you have any personal favourite authors who you think has held you to working towards a distinct voice?
Some of my favourite authors, and certainly those that most influence my style, are Kurt Vonnegut, Terry Pratchett, Christopher Moore and Douglas Adams. All of them mix humour/satire with speculative fiction to varying degrees.

Good solid choices there. Do you have a favourite line from any of them?
“…this is a hard world to be ludicrous in, with so many human beings so reluctant to laugh, so incapable of thought, so eager to believe and snarl and hate.” ? Kurt Vonnegut, Mother Night

The reluctance to laugh, I like that. You don’t suffer from such reluctance in your writing though, that mix of humor is important to you.
Yes, it is exactly what I strive for in my own writing. I find that fantasy and sci-fi that takes itself too seriously is sometimes a chore, but with a bit of comedy (or a lot of comedy) mixed in, it transcends to another level. I’m trying to capture that in my own writing.

I agree about fantasy and sci-fi coming off as too serious sometimes, it’s nice to just relax and you don’t need to feel reading is a chore but as long as you inject humor it’s all good. Were you into the humorous slant of stories as a child?
Yes, Anything by Dr. Seuss. We had all of them, and I always loved the weird, surreal stories and artwork. I still do. My favourites were The Grinch, The Cat and the Hat and On Beyond Zebra! I have no doubt that the weirdness influenced my sensibilities and sense of humour, and now I’m trying to impart those same lessons on my kids.

They are some great lessons and there’s lots of good choices from the words of Dr Seuss. Is your favourite fictional character courtesey of Dr. Seuss? Or do you have another you prefer?
Probably Death from Terry Pratchett’s Discworld novels. He’s the perfect blend of darkness and light, comedy and tragedy, juggling sombre duties of his role with just the right amount of levity. You really need to have a sense of humour to do his job, don’t you?

I think so, with everything you’d see you would need to just kick back and have a laugh from time to time. Is there a book that you wish that you would have written?
“Lamb: The Gospel of Biff, Christ’s Childhood Pal” by Christopher Moore. The premise, the jokes, the characters, it’s my sensibilities precisely, and I only wish I had thought of it first. I’m sure I wouldn’t have written it as well, though, so I’m glad I can sit back and enjoy Moore’s version.

I haven’t heard of that one before, but I will note it down as a funny recommendation. We’re just about reached the end of today’s interview and I was wondering if you had any tips that you could give other authors?
Don’t listen to any advice I provide in interviews.

I’m sure you’d have good advice, but fair enough! C.D., thanks for joining me today and I wish you the best of luck with your promotion of ‘Hell Comes to Hogtown’. Hopefully we’ve piqued the interest of some readers today.