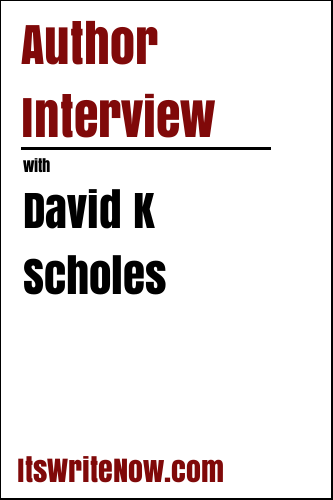 A powerful alien prisoner, innocent of all charges against him, survives the crash landing of his prison star ship on Earth only to be hunted by the Earth military.

Today I’m chatting with David K. Scholes, author of the short story collection ‘TRATHH and Other Science Fiction Stories’. David, thanks for setting some time aside to chat with me today about . Can you tell us a little bit more about the varied tales that are included in this collection, and expand a bit more on the titular story ‘TRATHH’?
The book comprises 21 fast paced and action packed science fiction short stories. The main story Trathh is based on my story arc that was on Paul Cole’s Beam Me Up Podcast site during 2012 and 2013. It is about a powerful alien prisoner, innocent of all charges against him who survives the crash landing of his prison star ship on Earth only to be hunted by the Earth military.

Wow, that must have been exciting seeing your story brought to life through a podcast. Since Trathh had already been released to the world in audio form, why did you decide that it was necessary include it in this collection?
It started from a desire to put the science fiction series ‘Trathh’ into print. I found it very rewarding to put this podcast story into print.

Your characters in the ‘Trathh’ story must have had an increased sense of sentience due to being brought to life through the podcast. How did they originate?
Just from long walks and sometimes laying awake at night.

And after watching the character progress from wisps on long walks to the fully formed beings on the podcast, did you find that you favoured one character more than the rest?
Yes, Trathh himself was my favorite. I also enjoy writing about the norse gods Odin and Thor.

Odin and Thor are not your creations and I would imagine that many readers have pre-existing notions of what they would be like. I don’t imagine that you’re likely to be employed in a field were a solid knowledge of Norse gods is essential.
I’m retired now but used to be an economist/accountant in Government. My jobs were totally different from the stuff I write about.

Yep, those careers are fairly distant to norse gods and science fiction. So, was research important to make sure that you were getting their voices right?
Yes, I did some research on some of the gods of Asgard such as Odin and Thor that were involved in the story.

Did you find that when your were crafting any of these stories that you tried to involve elements from your own life into the plot to create unexpected dynamics?
No – except that my “Young/Old War” story was perhaps partially influenced by life experiences.

Okay, so you’re not using much from your own personal life. Instead, do you like to colour your stories with elements from your favourite authors? And of course, who are you favourite authors?
Isacc Asimov, Arthur Clarke, Michael Moorcock. They haven’t particularly influenced my writing style.

Those are some pretty solid writers so it’s interesting that you don’t feel like they have strongly guided your own work. How do try guide your work from those initial ideas into a solid sentence when you are writing?
I don’t aim for any set numbers of words per day. Some days one can write a lot – other days the ideas just don’t flow. I write mainly at home but ideas come when I go on very long walks.

I have to agree that I find that walking stimulates those endorphins and other happy writing wheels and cogs in your head to get things moving. I hope that your wheels and cogs don’t jar when you turn your hand to editing. You are editing your books yourself correct?
Yes principally because of the cost I do a lot of my own editing.

Do you also design your own book covers to reduce the cost?
I use Amazon Createspace – a cover design service. I spend hours pouring over images on the fotolia site, I select an image as the basis for the cover design then discuss with the Amazon design team.

That’s interesting to hear that you used the Amazon design team’s service, I think that you’re the first author I’ve interviewed who has used their service. I find that a bit surprising as I would have thought that more authors would try and use the Amazon team as they’re so closely aligned with the Kindle service. So, including book cover design about how long did it take for you to get these stories from within the recesses of your mind to Amazon?
About 6 months.

That’s not bad. Now I know that this isn’t first novel, since you’ve been through the process of self-publishing a few times now do you have any tips for other authors?
You have to work very hard at the marketing. I think, if you can, try and get a publisher behind you for at least one of your books.

How many books have you published so far?
I’ve published 9 books so far and am close to publishing a tenth.

Ten published books, that’s an awesome milestone and great news for your fans. What is this tenth novel about?
It’s another collection of speculative fiction short stories.

I hope it’s not a long wait until you see that tenth book published successfully. It’s probably a long time ago now, but can you still cast your mind back to when you received your first review on your first published book?
Yes! Fantastic. It was a good review.

I’m glad to hear that you have been supported by the readers towards from that initial review to your new upcoming tenth book milestone. David, thanks again for joining me today and I hope that you upcoming release of your tenth book wildly exceeds your expectations and that readers take advantage of today’s promotion to pick up a copy of ‘TRATHH and Other Science Fiction Stories’.

Want to find out more about David? Connect here!