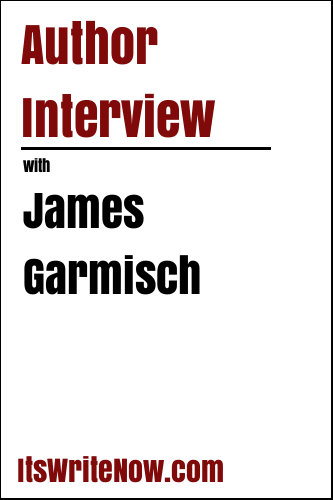 Moments before his execution, dissident writer, and political prisoner Huan, the man with no last name, is given a clear choice: spy for the Alliance and live to see his children, or die and remain forgotten like his name. The Alliance is collapsing, and Huan, knows how it was engineered. History has been reset, the children of dissidents re-educated, and the family unit abolished.

Today I’ve been given the opportunity to explore ‘History’s Prisoners’ with its author James Garmisch. James, where did the initial threads of this story originate from?
The idea has been tumbling around in my head like a lone sock in a dryer, collecting lint for quite a while — perhaps years. Once I had the plot, characters and the general ideas I just began plugging them in. In light of our insane political turmoil I kept having the same sort of question over and over again : what would happen if you mixed Ancient Rome, Nazi Germany and political correctness — all into one soup, created a dumb society so preoccupied with self gratification — reset history, abolished the family — and made everyone wards of the state? OH and add a resistance.

That’s a strong concoction of ideals and concepts that you’re brewing together there. There’s no mistaking any of it for being an accident.
Well yes of course — unless your one of those metaphysical types and question what all that really means. I am fairly black and white, and calculating.

Calculation to me reads as lots and lots of research. Did you do much plundering for answers in the written word?
Deep questions, yes yes and sort of. I have read tons of history books, mainly ancient Rome, Germany, Russia type stuff, drawn on my combat and medical experience in the military and wove it all together.

Can you give us examples of your personal combat or medical experiences that you’ve wound in?
Sure, lets not get any one arrested though — this is a family show.

*Laughs* Very true, I’m not looking to send anyone to jail today! How did the characters develop in your mind?
In pieces unassembled with no directions.

Typical, the only time you don’t get an encyclopedia of directions is when you don’t have a parent company to send complaint letters to *Laughs*. When you managed to assemble those pieces into reasonable facsimiles of characters did you find that you had characters you liked playing with more than others?
Reyanna and Doon and the forbidden romance — but you will have to read to find out. Sorry.

No need to apologise, you need to keep that air of mystery. Is there any character in your book that you would like to go on a date with or take out for a beer?
UM, maybe….

Keeping your cards close to your chest, I respect that. Moving on, how long did it take you to cook up this story ready for serving?
I wrote this book in about 5 months.

That’s a good duration. Are there any particular writing approaches you use to keep your head in the game?
I write in my head while I am doing dishes, driving, working out, shooting, eating, taking a shower, playing with power tools and then when I have a chance to sit down at a computer.

Multi-tasking on steroids, I like those levels of efficiency. But you have to be a bit closer to a computer to edit, how do you process editing?
TIME–re-write–collaboration–re-write—Editor— rewrite– $$$$–rewrite and then $$$$$$$$$

You should make a poster with those steps. I like the use of ‘$’ signs, gives it a bit more of a graphic nature. Speaking of graphics were you heavily involved in design and creation of the cover?
I came up with the concept sort of but my animator friend and genius artist buddy cooked it up. Tim Ingle — he rocks. Contact me if you want his info.

Will do. I like that you had the ability to collaborate with others at least on the book cover front. Do you find the writing or the collaboration most rewarding?
The writing process is rewarding… editing not bad — promoting sucks. Asking people to read and than review your book is like having sex with someone and then asking someone ‘how was it?’ you know you should not do it — but you do. I will write even if no one reads my stuff. I just hate spending money to promote!

I know, tis tricky. Spending money to promote can help your growth. Otherwise you have to do it all yourself and that’s pretty full on for most authors. Do you have any tricky tips about the self-publishing process that you can share?
Try to write well enough to traditionally publish, and keep writing any way. Learn your craft– really study and stop writing ‘popular-zombie-werewolf-erotic unicorn shit’– it makes the rest of us look bad. Just kidding. Write whatever. BUT join a community like Scribophile, meet talk and work on your craft. Don’t be arrogant. Chances are with millions of books out there no one will read your stuff– just like no one will probably read this– but keep at it.

Don’t diss the popular stuff! There’s some serious ‘$’ symbols involved. And some of it is pretty good. So if you’re not reading that stuff, what are you reading instead?
Scifi short stories in magazines and stuff by other indie authors.

Are you also reading much by traditionally published authors? Who are you favourite from the traditionally published fields?
Lots of the great scifi classics and the biggies like, 1984, ClockWork Orange, Animal Farm, Brave New World. I also love historical fiction — is any one reading this — Fortunes Favorites by Colleen McCullogh, any historical fiction or non fiction about ancient Rome, Cold War, Nazi Germany. The most frighting non fiction historical books I most recently read are by Richard Evans: Coming of the Third Reich — cause the same shit is happening today — brain washed sheep.

Nice solid sci-fi choices there, and you’ve reminded that I need to go and reattempt to read Colleen McCullough’s stuff. I must have been distracted by some of that shiny unicorn fiction last time :). Now that you’ve gotten the promotion kicked off for ‘History’s Prisoners’ have you cast your mind to a sequel?
Yes, I am working on the second now which will be out in the spring 2017 History’s Prisoners: Road to War

That’s good news for all of your fans eagerly awaiting for more. Finally, to sum up today’s interview what is your favourite word?
DONE.

And on that note this interview is also DONE. James, thanks for setting aside a little time today to discuss ‘History’s Prisoners’ I hope that you see some traction from your promotion $ and that you make some positive headway on your sequel.

Want to find out more about James? Connect here!