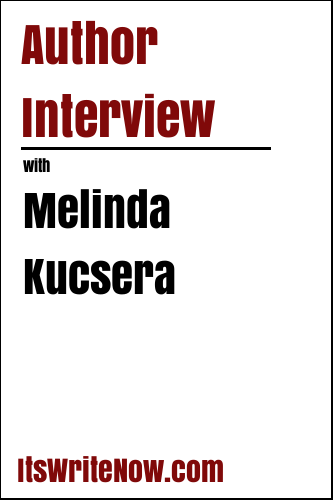 Secrets threaten, but magic kills. Plagued by sanity-twisting magic, Sarn must unravel a deadly mystery. But he’s prevented at every turn because his life is not his own. Haunted by one of the victims, Sarn must find out what happened before the ghost drives him mad. As plans collide beneath ensorcelled boughs, one thing is certain. If Sarn can’t get his magic under control, he’ll never discover why enchanted trees committed murder. How far is he willing to go to find the answer? The search might cost more than his sanity. Exposing the truth might claim his life and destroy the secrecy protecting his son from a killer. Something lurks in the enchanted forest, and its sights are set on Sarn and the magic in his blood. First in a new series, Curse Breaker: Enchanted is a fast-paced, character-driven fantasy tale with a murderous twist. Sarn’s story unfolds over three action-packed days in his double life leading to a breathtaking finale.

Melinda Kucsera has set aside some time to join me today to discuss her writing process, reading and the the ins and outs of her book ‘Curse Breaker: Enchanted’. Melinda, thanks for joining me today. I’d like you to kick us off by unravelling where the threads of Sarn’s journey started.
I was at a Renaissance fair, and during the final joust, there was a melee. My imagination took over and started adding in characters I’d been playing with. By the end of the joust, I had a whole sequence involving mythic creatures rattling around in my head. (This an expanded version of this scene is the centerpiece of book 3, Jousted). I went home, divested myself of my corset, cloak, and other Renaissance paraphernalia and set to work. But the scene refused to gel. Then from out of nowhere, Sarn walked in and stole the scene, the book, and the series.

It sounds like Sarn just popped up as a complete character. Was this the case, and did this pattern also follow for your supporting cast of characters?
They all walked out of my imagination fully formed, and they were not shy about telling me what they would and would not do.

Wow, that’s great that they knew who they were and weren’t shy about it. Since they all know who they are and what they’re doing, do they chase you down in your dreams?
Yes, they frequently invade my dreams and drag me off to view whatever it is they are doing. They have definite ideas about where their lives are going, and they like to make sure I know too.

Would you like to socialize with any of them if they could come to life?
Nope, I think that would be a bad idea. After you read the book, you’ll understand what I mean.

Oooh, a bit of intrigue. So, as you wouldn’t socialize with them, did you at least find that you developed one or two favourites?
Yes, the Queen of All Trees for one, I would love to spend some quality time with her. As far as mythic creatures go, she’s the oddest and the most mysterious one I have bumped into. Considering the amount of stories I have written about Shayari, that’s saying something.

*Smiles*. As you have many mythic, magical animals living in the world of this novel, I’m interested to know which you think is cooler? Dinosaurs or Dragons?
Dragons. They have wings and breathe fire.

As this novel is largely a high action fantasy ride, I expect that most of the ideas came from your imagination. Was research required to make sure that the plot didn’t get too carried away?
Yes, I did. There’s an archery scene in this book which I researched heavily.

When you set out to write this tale, did you also intend to put certain themes in to compliment the magic?
Yes, I prefer to write beautiful stories that leave the reader smiling and our main character in a better place physically or emotionally. Curse Breaker: Enchanted has a breath-taking ending, and it’s deliberate. I love fantasy especially when its used to showcase the beauty of the human spirit.

Do you feel like aspects of your own spirit and experiences your spirit has had formed the completed novel?
I drew on my love of stories. I am a voracious reader. I pay attention to what I like in other books, and I incorporate those things into my stories.

Who are your favourite authors that you’ve taken elements from to incorporate into your story?
Oh God, this is so hard to answer. I have about 50 favorite authors and growing. They include Louise Penny, whose Inspector Gamache series influenced Curse Breaker: Enchanted directly. I might have reread her entire series while working on this. Of course, there are the usual suspects like Tolkien, whose Gray Haven scene kept playing in my head on a constant repeat along with the soundtrack from the movie. Mercedes Lackey, whose Valdemar series convinced me that there were readers out there hungering for the kind of stories I liked to tell. There are so many more; I read all over the literary map.

What are you currently reading on the literary map?
I just finished reading (listening to) the Eoin Colfer’s Artemis Fowl series and started The Aeronaut’s Windlass by Jim Butcher.

Not bad choices there. How about when you were little, were you drawn to any favourite authors or were you reading all over the map at that stage?
I didn’t have a favorite. My town had a small library. All I had to read were Nancy Drew and the Hardy Boys.

Has Nancy or one of Hardy books stuck with you to adulthood to be your favourite character, or do you have another favourite literary personality?
Samwise Gamgee. We’re both motivators. There are some great motivational quotes in LoTR.

Indeed there is :). Do you use your talent as a motivator in your day to day life? In particular I’m thinking of your day job, or perhaps to motivate your writing.
I’m an IT project manager. I don’t think it affects my writing. I’ve been writing about Shayari since I was small, but I’ve only been in the IT/project management field since 2002.

Another IT Project Manager! I think you’re about the third one I’ve interviewed in the past month or so. I wonder if players in the IT Project Manager space find greater rewards writing more than other occupations or it’s just been a coincidence. I’ll start my investigation of this with you by asking what did you find was personally the most fulfilling part of writing and publishing this book?
I fulfilled my sister’s last request. I’d been working on this series off and on for years and had drafted most of the books in the series. Before she passed away, she begged me polish it up and publish it so other readers could fall in love with it.

I’m sorry to hear about the passing of your sister, but I’m so glad you were able to show her it’s completion. You mentioned you were writing this book on and off. About how long do you think it took you to actually write the book?
This is a hard one to answer because I didn’t write just one book. I wrote drafts of the entire series while working on another trilogy. I think I started working on it in 2008/2009 but don’t hold me to it.

That’s a significant period of time you’ve been writing for now. Have you developed any tricks to keep your head in a positive writing space?
I write every day since I have a blog and an addiction to flash fiction. Give me five minutes, and I’ll give you a story. Because I’m prolific, I receive a lot of requests to participate in writing challenges.

I knew there was a reason I haven’t gotten involved in flash fiction – I don’t need another reading or writing addiction! Does this prolific nature of your writing help you edit? You edit yourself correct?
Yes. I read voraciously, about 200 books per year. So I know what I like and don’t like.

Does this knowledge of your likes and dislikes also extend to cover design? Did you do the cover yourself or heavily influence it’s final design?
I designed the cover. In my other life, I am an IT professional, and I have done photo editing for some big name clients in the past. I went through 4 iterations before I hit on this one and just to be certain, I corraled my designer friends and showed them my cover idea. They loved it, so I knew I had a winner.

As you’ve now seen the entire writing to self-publishing end-to-end through your own work, do you have any tips for authors on how to become a better writer?
Polish your work until it shines

Or a better self-publisher?
Not yet but give me time to accumulate knowledge and I will.

Good luck finding out more self-publishing tricks :). Once you had this book published and it received it’s first review how did you feel?
Ecstatic. Grateful. I stopped and gave thanks for it. I am truly grateful for reviews.

I love that you stopped and appreciated it. I hope you get the chance to stop and appreciate many more. As this book is the first in a series, I do have to ask how are you progressing on the next installment.
I’m editing Curse Breaker: Faceted. It has a blockbuster ending.

Before I let you got today Melinda, I just wanted to know if you could let us know your favourite quote or line from ‘Curse Breaker: Enchanted’, to try to entice the readers in.
“He drew her calling card using the tears streaming down his face as a shimmering ink.”

I love that picture of tears of shimmering ink. Melinda, thank you again for joining me today for that wonderful chat, and I hope that you can further your sister’s request and publish the rest of this series.

Want to find out more about Melinda Kucsera? Connect here!