Author interview with C. L. Francisco of ‘The Gospel According to Yeshua’s Cat’ 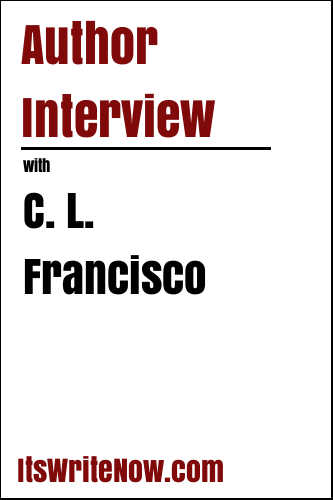 Mari is a cat living by her claws on the fringes of the Judean desert. Yeshua ben Yosef is a man with healing hands, seeking solitude in the wastes beyond Qumran. Their paths cross when Yeshua drives wild dogs away and rescues the wounded cat, carrying her in his arms to a wadi where he settles to pray. Friendship grows up between them, deepened by Yeshua’s ability to speak with animals. Mari’s observations illumine the road he walks, and when he leaves the wilderness, she rides with him, hidden in a sling beneath his robe. As Yeshua’s words take hold of the hearts of the people, his enemies’ attacks grow venomous. Tensions between Yeshua and Temple authorities escalate. In the end, all roads lead to Jerusalem, where Mari experiences depths of wonder unsuspected by those caught up in the tumult around her.

C.L. Francisco has joined me today to discuss the first three books in Yeshua’s Cats series, the influences behind her writing and she will also touch on the next adventures of Mari and Yeshua. Let’s start today’s chat off by delving into where the idea of following a cat’s narration of Yeshua’s journey started for you?
A cat I loved very dearly died as a result of a wildfire. Somehow her memory and voice wove itself into the idea of a re-telling of the Gospel story from the point of view of a cat–thus, Yeshua’s Cat.

Was her memory the only aspect of your own life that you included in the journey?
More than anything else, I used the cat Mari to try to communicate my own experience of Jesus of Nazareth. It’s a very personal account in many ways.

It is very clear that alongside this personal account, there is a strong, early religious journey. How did you make sure that this journey rang true?
I did an enormous amount of research, in spite of already having a PhD in religion. I compared gospel accounts, canonical and non, made spreadsheets, and learned everything I could about the culture and natural surroundings of anyone living in Israel during the early 1st century.

This is a bit of a tangent question, but I’m intrigued about what you can do with a PhD in religion, where do you find somewhere to use these religious research skills?
I taught religion at the college level for several years, and then worked as a director of humanities research at a small non-profit. Both combined to give me the background knowledge and research skills necessary to write books like the Yeshua’s Cats series. They say that a PhD is essentially a research degree: once you’ve earned it you should be able to do research on any subject at all. They may be right!

After completing four books you must find it fun to look back on how you approached writing that very first book ‘The Gospel According to Yeshua’s Cat’. How did the writing process unfold for you back then?
I began it, and wrote about 4 or 5 chapters, the year of the wildfire, and then stopped, for a variety of reasons. I picked it up again 2-3 years later and did little else for the best part of a year.

How has that changed from how you approach the overall writing and publishing process today?
I write every day when I can, but being an indie author means I have many hats, so I can’t spend as much time as I would like actually writing. PR is a hugely time-consuming task, even in small bits. When I am writing, I write until I hit the wall and start writing gibberish. The number of words doesn’t matter. Sometimes the words come in a torrent. Other times I’m lucky if I can gather dew. And I have an office at home that I share with my cats where I write.

It’s good to see the feline support out in force for you :). As an indie author are you editing the books yourself, or are do you employ editors?
I do almost all the editing myself, with a little help from my friends!

Do your friends also chip in ideas for the book covers?
This first book cover was a collaborative effort between Wendy Francisco, my sister-in-law, and myself. She did the cat’s face and the buildings, and I did the back and the parchment. I’ve done all the covers since then by myself.

On the flip side of writing, do you also find that you yourself are a big reader, and if so who are you favourites?
My favorite authors are CS Lewis, Elizabeth Goudge, Dorothy L. Sayers, Lois McMaster Bujold (Challion), Robin McKinley, Diane Duane, and on and on.

*Laughs* And on and on. Are you reading anything good at the moment?
I am rereading one of my favorite books right now, written by a little-known mid-20th century British author, Elizabeth Goudge (not to be confused with Eileen Goudge). It’s called The Scent of Water, and is a glowing and beautiful depiction of the spiritual life–as experienced by very different characters.

That sounds like it could be a worthwhile read, I will have to check it out. As an avid reader do you think that you’ve taken anything out of your reading experiences and melded them into your own writing?
I suppose it’s possible. My writing is something that rises up unbidden when it’s at its best. I also write with a sense of rhythm that I think must be entirely my own.

I really think that developing a unique sense of writing rhythm really shows proficiency as an author so that’s a fantastic achievement. Speaking of rhythms, let’s change the tempo of this interview and go to some boppier, off-beat questions. As your series is narrated by an animal I’d love to know if you could breed two animals together to defy the laws of nature what new animal would you create?
Cat and owl: a cowl

Hmmm. I’m having a little trouble picturing it – I think it’s got to do with having trouble deciding between feathers and fur but I think that it could work. And finally, do you have favorite quote or words of wisdom from another author?
“So I pray the gods may hear even me, and let my whispered yes tower above my shouted no and mount all the way to their five-fold realm.” by Lois McMaster Bujold, from Paladin of Souls.

There’s some good poetry in that. Thank you again for joining me today C.L., and I hope that your enjoy your journey promoting and completing the Yeshua’s Cats series.