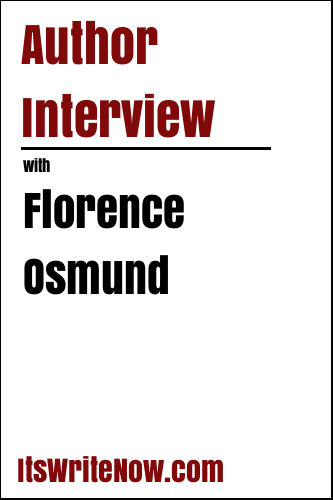 The Coach House and Daughters two-book series begins when twenty-four-year-old Marie discovers the extent of her husband Richard’s involvement in 1940s Chicago underground activities. She runs for her life, fate drawing her to Kansas where she rents a coach house apartment that she believes to be a safe refuge. When Marie discovers the identity of her real father and his surprising heritage, Marie’s life changes in unimaginable ways. But ironically, the most consequential change grows out of an encounter with a twelve-year-old girl named Rachael.

Today I have invited Florence Osmund to chat with me today about her two part book series, ‘The Coach House and Daughters’. Florence, thanks for setting aside a little time today so that we can go through this novel and chat more generally about your approaches to writing. I’d like to start off today’s interview by getting you to delve into the approach that you took to bring this book to life? Simply, what inspired this book?

I wish I could answer that. For years while I worked in large corporations, I dreamed of writing novels in my retirement. So for years, I wrote down thoughts I had about a character, story line, conversation, or interesting scene. In the end, I had hundreds of scraps of paper containing these thoughts. When I retired, I went through them, categorized them, and put them in piles. Three distinct story lines emerged that provided more than enough material for four novels.

I’ve talked to a few other writers who have ended up with scraps of a book scatter across many little bits of paper, but I really the way that you’ve that evaluated each piece and allocated them to a story and ended up with multiple writing projects to work on. And by using this method it seems like you’ve really made a deliberate choice about what elements are going to appear in each novel, correct?

Oh yes — a very conscious choice. My novels contain messages — what the story is really about — and for that reason, it is important for me to know the theme before I write the first word. The theme that runs through this boxed set is that being true to yourself can be complicated when your life is entangled with divergent family members and community.

Were the central and the accompanying divergent characters in your book also well formed before you started writing?

I typically develop the characters before I start writing, but sometimes they take off in a direction I hadn’t planned, a phenomenon I still don’t completely understand.

People say that their characters are fictional, but when they do things like take off in their own direction I’m not so convinced that they aren’t real! To keep your book grounded to a version of reality did you find the need to go and research?

Both books required significant research as they take place in the 1940s and include threads of what it was like for people of color during that era. I found much of this research so disturbing, I hesitated more than once to include it. In the end, I’m glad I did, and so are many of my fans.

That must be gratifying that you readers appreciate the risk you took to include the less than desirable aspects of history. Was the receiving feedback the most rewarding aspect of writing this book?

The Coach House was my first novel and for that reason is near and dear to my heart. Putting my family home on the cover also holds special meaning for me as I lost both parents before getting it published.

I’m sorry to hear about the passing of your parents. I like that you put that subtle nod to them in your work. As this was your first foray into writing, about how long did it take you from the start of writing until you had finished?

These two books took me two years to write. Being a novice writer at the time (translation: making every writing mistake possible) I first wrote it as one book. After an editor informed me of the error of my ways, I split it into two books. Re-writing takes considerably longer than initial writing, and so I quickly learned the benefits of doing things right the first time.

Do you leave the majority of the editing to your editor, or do you take a bit more of an active role these days in an attempt to prevent rewriting?

My books go through three levels of professional editing, but I do as much as I can before I send it to my editor. I have found that the more I can do myself, the more time she spends helping me to bring my manuscript up to the next level.

Giving your editor the ability to focus her skills on making it shine is important :). Have you also taken professional advice for your book cover as well?

I have used http://www.tugboatdesign.net/ for my last three book covers. I like working with her–she’s creative, accommodating, and reasonably priced.

Now that you’ve been through the entire self-publishing cycle do you have any other tips that other authors might be able to take on board to prevent them from falling into traps?

I devote an entire website to new and aspiring writers, helping them avoid some of the mistakes I made. My #1 tip is to do your homework before you delve into a writing project — it will pay off in the long run. My #2 tip is to read, read, and read some more. Learn from those who have succeeded before you. My website is http://florenceosmund.com/ where I offer writing tips, book promotion strategies, steps to build an author platform, how to avoid scams, and much more.

Wow, that is an impressive resource. I’ve just had a quick look myself and I can already see a few helpful hints and I’ve only glanced at it so far. Apart from keeping this website up to date, have you started working on your next writing project?

My current project involves a cozy mystery writer who suspects her husband is mimicking the actions of a character in one of her books who tries to brainwash his wife into thinking she’s going crazy so he has just cause to leave her. It’s been a fun project.

*Laughs* I like the sound of that one. You will have to let me know when it’s ready! Florence, thanks for joining me today, best of luck for your promotion of ‘The Coach House and Daughters’ and your progress on that new mystery.

Want to find out more about Florence? Connect here!