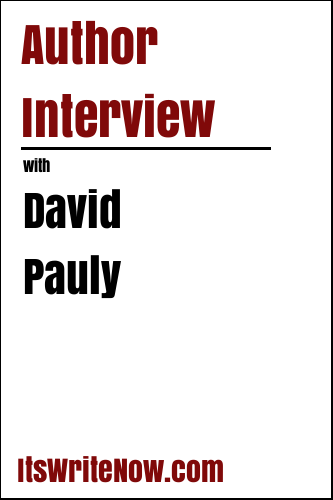 From the ashes of the Great War, Men, Elves and Dwarves struggle to rebuild their societies in the land of Nostraterra. Secret factions amongst all the races risk plunging Nostraterra into open warfare by threatening the life of Alfrahil crown prince of Men. As fire arrows plunge down, a desperate Alfrahil rides for his life to try and escape this deadly assassination. Who tries to kill the prince and why?

Today David Pauly has joined me to chat about his novel ‘The Fourth Age Shadow Wars: Assassins’, the first book in the Shadow Wars series. David, thanks for joining me today to chat about the Assassins chapter of your sci-fi/ fantasy adventure. Let’s start at the beginning of this book, the initial idea. What was the initial idea that put your on the path of writing this series?

I always wondered what happened to the worlds in Lord of the Rings, Narnia, and Shannarra after the stories ended. So, I began writing fan fiction for a Lord of the Rings sequel, and eventually I changed it into an original story that tells what I think would have happened after the dark lord is defeated in your typical fantasy novel.

As this started as a fan fiction project you were working in someone else’s world that had already been defined and had its own playbook and rules. As you moved the story into the original space, did you find that you needed to research or investigate the new rules you were going to setup in this world?

Yes, besides reading many classic fantasy books, I researched the Gothic language and used it as the basis for my language in my books.

Did you also use your own life experiences to help form the rules or events in your book?

Yes, too many to count. I used not only my experiences, but also experiences of family members and close friends, to provide a realistic element to my characters. One thing that I always hated was the fact that many fantasy characters are one-dimensional, the author depends upon the plot and description to keep the reader intrigued. I wanted to show the readers that important characters in stories are actual people too, flawed, hopeful, vulnerable, yet believable.

Did you find reaching that balance of believability in your characters came easily to you?

Fairly easily. Current political and corporate figures are portrayed, but I used the personalities of people I know personally to make them stand out in a medieval fantasy world.

When you’ve included some of the current political and corporate figures in the world in your book you obviously have something that you want to comment on about in society. Can you provide us with a little more commentary on what you wanted to say in this book?

That when faced with choices, sadly most people go with easy selfish decisions, that are only self-gratifying. In my world people who choose this path are actually confronted with unpleasant results. The noble characters in my book are constantly fighting against the selfish people, trying at least in a small way to make the world a better place.

For the greater good I hope that people can take a page of your book and make the less selfish choices in their own lives. Was working through these concepts of selfish versus the more ennobled path the most rewarding aspect of working on this book and in turn the series, or did you take away a greater reward?

Escaping into my own fantasy world, to place myself mentally in each scene of my book.

And how does each of these scenes move from your mental space to the written word? Do you have any tricks for getting the words on the physical or digital paper?

I write when I have time. Most usually when I feel in the mood to write and hope that I can generate some good product.

Do you write if you aren’t in the mood or if you have writer’s block?

It rarely happens, but if it does, I leave the blocked part of the story alone and write other scenes. If that does not work, than I go back and edit my work and that usually frees me up to keep writing.

Do you do a large amount of editing the books yourself?

I edit myself, and then when it’s ready, I have a professional editor.

Having a professional editor is a good strategy to ensure a good end product. Do you have any professional experience in the publishing or writing worlds that you believe has also helped you achieve a top product?

I am a trial lawyer. It has influenced my books a bit; there is a trial sequence in my novel. Otherwise, being a lawyer requires strong technical skills with precise writing, so this allows me to have long complex sentences, rich in textures.

So it sounds like you have a strong background with creating a solid written work. How have you found the challenge of self-publishing after you have the final book completed?

I am still really new at this, so persistence seems to pay off, so just keep trying to find new ways to market yourself.

And when you are taking a break from marketing yourself I hope that you are working on new books. What do you currently have in the works?

Dark Shaman, the sequel to the Shadow Wars series

A little spoiler there that this world extends beyond this series. I’m sure that some of your readers have perked up from this knowledge in anticipation for your next release. And I’m sure that you are anticipating the end of this interview, but if you have a few more minutes I’d just like to take a minute to enter the quick fire round where I will attempt to elicit facts about yourself that even you may not be aware of. Let’s start with one of my favourites, do you have any philosophies that you live by?

Try to not be a jerk!

What is your favourite quote?

“Benefit of a Classical Education.”

I haven’t heard that one before. Are you a valuable asset on a quiz team?

Would you have a cast party with the characters in your book if they could come to life?

With some of them, but others would be lethal! *Laughs*

*Laughs* Perhaps there’s some security that we need to get in for this cast party. Moving away from your felonious friends, what is your favourite ocean?

Are you introvert or extrovert?

What is your favourite song or music to work by?

Progressive rock from the 70’s

When you are writing have you already decided on the ending?

It unfolds during the process.

If they made a movie from your book who would you choose to play the main characters?

That’s the start of a great cast. Cate Blanchett is a very solid actress, Jeremy Irons has that fantastic voice and I’ve never disliked any of Geoffrey Rush’s roles. If you ruled your own country, who would you get to write the national anthem?

I like the sounds of that. Fast and dangerous! Why do you write?

It’s a creative outlet where I can express myself without interruption.

What is your favourite flavor of ice cream?

That is a top choice. What’s the most unusual name you’ve ever come across?

I’m fairly sure I’ve heard that one before, but I do agree it’s a bit on the atypical side of the naming spectrum. David thanks for spending a little time with me today to get into ‘The Fourth Age Shadow Wars: Assassins’ and I wish you the best of luck with your continuing journey in this world.

Want to find out more about David? Connect here!