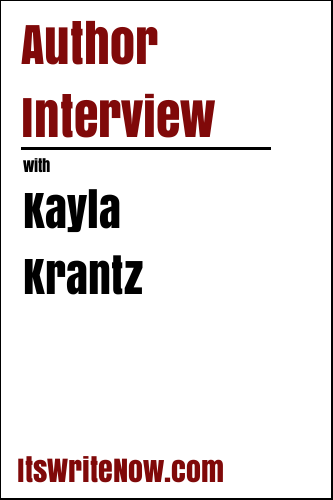 Obsession is deadly. No one learns that better than Luna Ketz, a pessimistic high school senior. She wishes more than anything to graduate but things don’t always go as planned. Luna quickly finds herself trapped in a web of lies and murders, spun by the least suspected person in her hometown. It’s not long before she realizes she’s being targeted by the person she despises most in the world. When Luna figures out who is behind the killings, things make a turn for the bizarre when she is contacted by a friend she has not heard from in years. It is then Luna realizes she is very much in danger, but although she can avoid the killer in reality, she cannot avoid him in her dreams.

Today I’ve been given a little time with Kayla Krantz to chat about Luna Ketz and the monster that she finds within the pages of ‘Dead by Morning (Rituals of the Night Series 1)’. Kayla thanks for allocating a little time for us to gossip a little about this tale. Let’s get down to business, how and where did this tale begin?

Probably the most interesting truth about this series is they started from dreams. In middle school, I had dreams of a blond-haired boy like Chance, and it gave me this idea to run with.

How did you start running with this idea?

I did some research on the occult as well as different knives and dream symbol meaning.

Did you also try and incorporate elements from your own life into the characters?

I was bullied a lot in high school, so I found it very cathartic to put Luna in the same kind of situation and have her fight her way through.

That’s a bold choice to place your characters in situations reminiscent of your past like that. I would think that it must be cleansing to work place Luna in those situations and give yourself the ability to view them simultaneously both as the fighting adolescent and an adult with a more developed perspective. How did you feel about the characters in the novel?

Most of the characters in the book are based on people I know in real life. Chance and Luna, however, are two halves of a whole. Chance is rebellious and attention seeking while Luna keeps her eyes to the ground and does what she’s told. Their minds compliment one another in a very interesting way.

It feels like you have a close connection with your characters. Can you see being played by any actors in particular if given the chance?

I would definitely choose Evan Peters to play Chance, hands down. For Luna, I think the most logical choice would be Taissa Farmiga since she is a wonderful actress as well as the way she works with Evan Peters.

It sounds like it would be a good cast party!

I would definitely have a cast party with them though I would be understandably wary of Chance!

That’s understandable. Was the wariness of someone like Chance something that you really wanted to communicate to the readers?

There were two messages wanted people to take away from Dead by Morning are 1. Nobody’s perfect and 2. Bad things can happen to anyone, even someone “unpopular” like Luna, which is why it’s important to make sure we have plans in potentially hazardous situations.

To me it sounds like the second recommendation is close to the Boy Scout motto of ‘Be Prepared’, which I think, is a great advice to many. As you are keen on making, plans I wonder if you are able to update the readers on the progress on the third instalment in this trilogy as both the first and second tomes are already available.

Currently, I’m working on publishing book three of this series, Survive at Midnight, as well as a fantasy about witches called The Council.

Good luck with your progress on the final instalment and your new fantasy work. These projects aren’t your only works of fiction, which shows that you are working on becoming a prolific writer. Why do you write?

I have no definite answer for this question. I write because it feels strange NOT to write.

That sounds like the mark of a true writer to me :). As you feel strange when you’re not writing I imagine that you must feel very comfortable with your writing process. How do you approach writing?

I write just about every chance I get. I don’t limit myself to a specific location or number of words. I consider it a successful day if I even jot down just a line of dialogue. As long as I write something, I’m happy. I usually make a vague outline when I begin a book that I follow, but ultimately, the plot is decided by the characters. Almost always does the ending change before I reach it.

Do you ever get stuck? What happens if you are having trouble even producing that single dialogue line?

Writer’s block is a toughie for me, but I usually just try switching the project I’m working on. Sometimes, when I can’t write anything, I just listen to music for a while.

What’s on your playlist?

I love to listen to Eminem when I write. His music has been a great inspiration in helping me shape the villain of my series.

*Laughs* I can see how Eminem would inspire some villainy :). Do you find inspiration for characters in other places apart from the musical contributions of Eminem?

I’m a cashier at Wal-mart and the biggest way it influences my writing is that I meet a lot of different people and personalities.

The sheer range of personalities that you would see there would be enough to fuel your writing for years! Once you’ve inspired and fueled your writing, how do you approach editing?

I do a lot of basic editing and cleaning up myself before I ever send it to my editor.

Are there any reoccurring problems that you find that you’ve keep doing during writing that you are constantly tidying up during editing?

I’ve noticed that in writing, I tend to use the word “know” a lot, and I have to make an effort to reword entire sentences to get rid of it.

There’s always a word like that which always seems to appear out of nowhere. I’d be interested in a word count to see how many times it pops up each time you write :). We’ve finally made it to my personal favourite section of the author interviews, the Quick Fire Round where many mysterious questions with great and little importance lurk. Let’s start this round with: What is your favourite quote?

“An eye for an eye and the whole world goes blind.” ~ Gandhi

Technically, I already invented a monster in my books…his name is Chance ;)

*Laughs* I’m not sure he’d see himself that way, but I think it’s a very valid answer. Are you introvert or extrovert?

I am definitely an introvert.

The most unusual name that I’ve come to use in my books is Magda.

I like the name Magda, it seems nice and solid to me. What is your best tip for authors?

And finally, what is your favourite line, quote or statement from your book?

He was real, and he was a monster.

Kayla, thank you for sharing your monster and his story with us today. I wish you the best of luck with your promotion of ‘Dead by Morning (Rituals of the Night Series 1)’ and I hope that your writing fun continues in your new witch fiction.

Want to find out more about Kayla? Connect here!