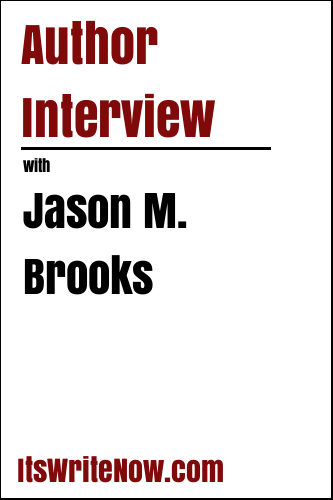 The crew of the Independence set off for Wild Space to explore and discover the established societies of Earths early explorers. But upon their arrival, the ship is attacked and they are left for dead in space. Now, their mission of exploration has become a mission of survival.

Today Jason M. Brooks has joined me today with his own mission to share the wonders of that the crew of the Independence face in the first book in the Wild Space Series, ‘Wild Space: Onslaught’. Jason, thank you for setting a little time aside to delve into the depths of space with me today. What was the underlying idea that pushed out to explore the vast expanse of space in ‘Onslaught’?

I have always been fascinated by space travel and the idea of what would it look like if humankind broke free from our system and discovered other worlds. What type of societies would form from the collaborative efforts of these explorers? What would the governments look like? How would the people live? Wild Space explores this and more.

How did you answer these questions as a part of your writing process? Did you look into what researchers or futurists have posed as possible or likely outcomes?

No, just my indulgence of watching Star Trek, Star Wars, and Firefly. Those are the three shows that inspired me the most. Wild Space is a union of all these shows into my design.

*Laughs* I can see how the combination of those three would provide some excellent answers and perhaps even more questions to give you a firm underlying design for your book. Did you pepper the plot with many elements from your own life to broaden your ideas?

Only my sense of adventure and exploration.

Those senses are wonderful places to start with space exploration. Were your characters borne from your sense of adventure?

The characters were just born. I had an idea of who I wanted to create and how I wanted them to be, but as I wrote them, the characters evolved and became their own beings. It sounds crazy, but anyone who writes can understand what I’m saying. The circumstances and experiences shape the characters as they go, regardless of the direction I might have originally envisioned.

Have you ever envisioned your characters in the flesh? For instance, if they made a movie from your book who would you choose to play the main characters?

I would want a no name actor. A fresh face that could be who John Avery is and not bring the baggage of other movies with him.

I have to admit that an unknown lead actor would probably be my choice too. I’m not sure why I feel there would be more impact with an unknown, but your understanding that they wouldn’t bring baggage for the viewer is probably apt. Would you have a cast party with the characters in your book if they could come to life?

Probably not. I’m not a party person and I LOVE my privacy. I might send them a card at Christmas, but that’s pretty much as close as I’d come to a party… however, if there was a chance to take a flight on Independence? Well, then I’d break down some barriers and throw a shinding.

That would be a fantastic opportunity and well worth the shindig! When you were writing this book, did you keep coming back to a single point of focus, or ideal that you want readers to take away from your book?

I didn’t write this book to say something profound. I wrote it to entertain.

In today’s world I am finding the reason to entertain has increasing importance, and I really like that you’re willing to share that entertainment was the main reason for the book, but I don’t necessarily believe that profound ideals are always required. Since you were looking to entertain when writing this series, what aspect of this book has given you the greatest entertainment?

Fan reaction has been the greatest reward. I love seeing people purchase my first book and then go back and grab the rest. It tells me that they are connecting with my characters. And then there are the emails from readers. I love seeing people respond to what they have just read. To see readers get excited with my characters like I get excited as I write them, is like a drug. I’m addicted.

For readers also looking to get addiction to the Wild Space series, which book in the series are you working on?

I’m in the process of wrapping up the final book in the first series of Wild Space. Wild Space: Series One, is made up of six books (think of them as television episodes). If this were a television show, the sixth book would be the season finale. I’m really loving how the first series is drawing to an end and what is being set up for the second series.

You really do communicate the feeling like these books are TV episodes that have been written down. Does this influence how you are writing your books? For example are you storyboarding like one might expect someone within the TV realm would?

I typically outline my books first. Then, once I get writing, what comes out on paper is anyone’s guess. I typically deviate from the outline about a quarter of the way into the book.

*Laughs* What happens after the deviation? Do you get back on the planned ending?

I always have an idea how it will end, but it doesn’t always turn out the way I originally envision.

How fast do those ideas that you envision form? Are you a speedy writer?

That’s a reasonably solid pace. Do you ever find yourself getting unstuck from writing or getting distracted? How do you re-target your focus? Music perhaps?

I don’t write to music. Noise of any kind (other than the keyboard keys clicking) is disturbing to me. I jump ahead and then work my way back.

Do you also jump straight into the editing process?

I put the book on the shelf for about a month and then I come back to it. I do a round of edits myself and then I send the manuscript off to a retired college professor who helps me finalize it.

As you’ve self published multiple boos now, are there any key tips you feel that other authors might benefit from?

Speaking of entertaining, I’d like to take the time to move our interview from the serious to sunnier with our quick fire question round. No pressure, but I will be trying to do actual brain surgery via seemly unrelated questions so it may get messy. Let’s start with the simple – What is your favourite quote?

The wise words of Yoda, always a top recommendation. Are you a valuable asset on a quiz team?

I love your honesty. What color socks are you wearing?

He’d be blue and fuzzy and I’d call him Hank.

Hank sounds a little cute. I’m thinking that he might be hiding some big teeth under that fuzz. Speaking of teeth, what is your favourite flavor of ice-cream?

More fuzz with a bit of a bang! Awesome :). Keeping on the topic of animals, if you could breed two animals together to defy the laws of nature what new animal would you create?

A Crococat – crocodile and cat: a cuddly killer.

An animal that would double as a companion with bite . I like it! Are you introvert or extrovert?

Introvert by choice, but I can come out of my shell when I need to.

I hope you didn’t slip! If you ruled your own country, who would you get to write the national anthem?

*Laughs* Whimsy at its finest! What’s the most unusual name you’ve ever come across?

Now, that is a weird name. Talking about top words, what is your favourite word?

Do what you love… and figure the rest out later.

And we’ve run out of questions today so Jason we will have to figure the rest out later. I’d like to thank you again for joining me today and I hope that we’ve given the readers some ideas about exploring the world of ‘Wild Space: Onslaught’.