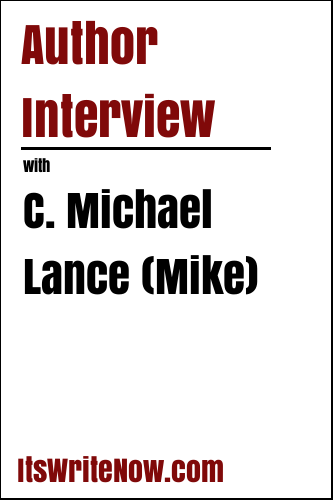 A single-vehicle wreck on a lonely Kansas highway. Steve stops to render aid. The driver is dead. The van is full of drugs and cash. He takes the money. It looks like the perfect crime. No witnesses. No fingerprints. No sign the cash was ever there. Steve and Jen come together in a plot to move the stolen funds to a Caribbean tax haven. But, the head of the cartel wants it back. Esteban sends a DEA investigator on the cartel payroll and two of its enforcers to find the money—and kill Steve. Perhaps it’s not the perfect crime.

C.Michael. Lance has joined me today to ponder the possible perfect crime that is featured in ‘Caribbean Layoff’. Mike thanks for joining me today. I’m liking the possibility that perhaps Steve and Jen’s idea of the perfect crime may not in fact be quiet so perfect after all. And when I start thinking about the possibility of the crime being less than perfect I start to wonder where the underlying ideas of behind Caribbean Layoff began?

Caribbean Layoff was born in a daydream on a long cross-country flight.

Once you had gotten off of the fight I’ve got a feeling that you probably needed to delve into some research as I expect that you didn’t have much first hand experience in crime.

*Laughs* Figuring out the physical amount of space that the money actually occupies! That is my personal favouite piece of research. I hope you get to use this fun trivia again! Apart from this awesome research did you find yourself integrating aspects from your own life to deepen the story?

I was laid off in 2009; shortly thereafter I had a bicycling accident that required a partial hip replacement. I started writing while laid up. It was my first effort and it was not good. After writing three better books, I revisited my first and re-wrote it, drawing on what I had learned in writing classes, peer reviews, and critique groups.

I appreciate that you acknowledge your growth as a writer. I feel that often many writers don’t really demonstrate the work that they’ve put into learning how to improve their writing skills over time. Can you share your top tips that you have personally used to improve your writing?

Join a writers’ group and look for compatible, contributing partners to work with.

After you’ve been through writing classes and critique groups I imagine your process for attacking the beast that is writing has greatly improved. Can you take us through how you start writing a new work?

I start the book, and if I get hung up (writer’s block) I start outlining, but I have the beginning writing as a foundation.

Once you have a foundation written, do you start refining your work yourself?

I have a superb writing and critique group I work with.

Just out of interest, did you find that your previous professional work has influenced your work as a writer?

I was an Aerospace Engineer, Financial Analyst, Accountant, Product Manager for large-scale telecommunications systems, and ended up selling telecom network systems to major network carriers. Bits and pieces of each are valuable background. Most of my early career writing involved product specifications and departmental budgets. Most assumed those were fictional, too.

*Laughs* Many of the departmental budgets that I’ve seen were fictional so I can see how that directly supported your fiction writing career! Getting back to ‘Caribbean Layoff’ what did you find was the most rewarding aspect of putting pen to paper for this project?

I found I enjoy writing and the research required to make it believable.

And from the beliefs that ended up on the page, what did you find was the most important thing that you wanted to say?

Can you tell us a little about the good and bad guys in your novel? Would you like to have a cast party with them?

Of course. But they’d pay. They have the money.

*Laughs* Making sure that you don’t have to flip for the bill! Very important. If they made a movie from your book who would you choose to play the main characters?

Those are solid choices, and I think they would both do the characters justice. Earlier in the interview you mentioned that this was your first novel written, but it was published after you had revisited it after writing another three books. This to me smells like a dedicated writer who has other writing projects on the go. What are you currently working on?

I’ve written three Contemporary Fantasies in a series call the Battle Wizard Saga. I’m writing the 4th and final book in the series.

Good luck finishing your series! I’m sure the satisfaction from writing getting to the end of a series will be fantastic. And make sure to celebrate when you get there. Now, I’d like to more on a little from our discussion on writing and move to the random quick fire round where I sent you a barrage of questions in hopes to get a better insight into your though process. Let’s start with: What is your favourite quote?

Suppose you were an idiot. And suppose you were a member of Congress. But then I repeat myself. — Mark Twain To err is human. To blame it on somebody else shows management potential.

*Laughs* Ahhh, management potential. One of the great wonders of the galaxy! Are you a valuable asset on a quiz team?

Yes, as long as it doesn’t involve entertainment.

South China Sea-until they go to war over it.

Hopefully they decide they have better things to do than to go to war. If you invented a monster what would it look like and what would you call it?

Manticore, the best I can do is refer you to my website: http://cm-lance.com/Manticore.php

Fantastic! I’m super impressed with your ability to see the future and prep for this question so thoroughly! Have you ever danced in the rain?

Yes, but only while clothed.

*Laughs* I’m really glad that you were clothed. Although dancing naked avoids the problems of getting soggy shoes, there are some other issues that arise with the nakedness. Are you left or right handed?

Both. I operate out of my left and right brain.

Do you need to alternate your hand use to match the region of the brain that you’re using? Because that would be an awesome party trick! How are the colours in rainbows made?

Wicked Witch of the West

Now they sound awesome! What is your favourite flavor of ice-cream?

Tough one. Americone Dream and Cherry Garcia are neck-and-neck.

I have to agree that’s a tough pick! What’s the most unusual name you’ve ever come across?

And finally can you give us a little snippet of ‘Caribbean Layoff’ that you think might help get our readers to whet their appetites?

Guilty thoughts fermented in his brain. What had he done? He always told the kids not to steal. Stealing was the worst thing you could do—taking someone else’s hard earned gains. Here he was with a truckload of stolen money. But it was drug money. Wasn’t it?

The mystery and morality of misappropriated money. Mike, thanks for joining me to give the readers and myself some questions about perfect crimes and morality to ponder over in anticipation for reading your novel ‘Caribbean Layoff’. Best of luck with your promotion :).