Author interview with David Z Hirsch of ‘Didn’t Get Frazzled’ 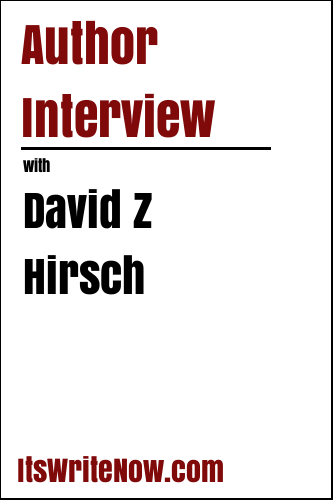 Medical student Seth Levine faces escalating stress and gallows humor as he struggles with the collapse of his romantic relationships and all preconceived notions of what it means to be a doctor. It doesn’t take long before he realizes not getting frazzled is the least of his problems. Seth encounters a student so arrogant he boasts that he’ll eat any cadaver part he can’t name, an instructor so dedicated she tests the student’s ability to perform a gynaecological exam on herself, and a woman so captivating that Seth will do whatever it takes to make her laugh, including regale her with a story about a diagnostic squabble over an erection. Didn’t Get Frazzled captures with distressing accuracy the gauntlet idealistic college grads must face to secure an MD and, against the odds, come out of it a better human being.

For all of those readers looking for some fictional gallows humor in the wonderful world of medicine, you will be excited that I am joined today by David Z Hirsch, the debut wordsmith behind ‘Don’t get Frazzled’. David, thanks for wading through the entrails of your novel with me today. Let’s start at the beginning, where did the idea of ‘Don’t get Frazzled’ start?

The idea of writing a fictional story around medical students is common enough on TV or in the movies but entirely lacking in world of literature. The closest thing we had before my novel was House of God, published in the 1970s and about a first year resident (the year after medical school). There are med school memoirs out there, some quite good, but fiction has mostly avoided that world. That’s a shame. I decided to take it on.

When you decided to take it on, I imagine that much of the book was taken directly from your own life experiences of medical school?

Yes, although not as much as people think. Many of my readers have focused on trying to figure out which parts are “true.” It’s fiction, folks. You can blame me for all of it.

So, no tomes of medical research were required to get the feel just right?

Nope, most of the research I did was in naming the characters. The rest just came out of my warped brain.

And what a lovely warped brain it is. After the characters were named was it easy to interact with them, or did they prove more difficult and refuse to play?

They often didn’t want to play, and I’d be stuck for days. Then I’d see it, often when thinking about something else entirely. Hello, friend. There you are.

After they appeared and proved decent playmates did you start to party a little with them? Better yet, would you have a cast party with the characters in your book if they could come to life?

Absolutely. We’ll need an open bar to mitigate the risk of a brawl, but sure. What a blast that would be.

Of course, with students there’s always that implied requirement of an open bar, so I shall ready the bar tab in preparation. Apart from keeping your characters away from major brawls, what did you find satisfying about putting your pen to paper in this novel?

I love it when a good scene comes together. Or when a character says or does the perfect thing to get the point across. I know it’s become cliché for writers to say that the story writes itself but man, when that happens it’s such a beautiful thing.

The beauty of a self-typing story is truly understated. Overall, what do you hope that readers take away from your book?

The epic scope of medical school, from idealistic pre-med to newly minted physician, is study of humanity at its most tenuous: what snuffs it out, what sustains it, and how one can get frazzled yet still maintain humanity despite often furious opposition.

The study of humanity really is something else. Before I let you go today I’d like to test that you’ve still retained your own humanity through your own round of med school through my ever famous quick fire quiz round. How about we start with: are you introvert or extrovert?

I think I’m in introvert cowering inside an extrovert.

Sure, who hasn’t? The real question is, have you ever tangoed in the snow? That’s much less common, I think.

Tangoing in the snow is the real question isn’t it? Unfortunately I forgot to tango last time I was in the snow, but I have tattooed it on my arm to remind myself for the next time I see some powder. How are the colours in rainbows made?

Crayon, obviously. Every child knows that.

Apparently not, some people seem to think that the colors are from Skittles of all things. What is your best tip for authors?

Don’t read your reviews. I say that because I think the best tip is always one that no one will ever follow.

Following the rules only ever leads to limited fun anyway. What is your favourite word?

*Laughs* Complicity is fun! And finally, to entice our readers into picking up a copy of ‘Didn’t get Frazzled’ can you leave us with your favourite line?

Babies used to make me nervous, but these squirmy things are awesome once you’ve read the manual.

*Laughs* So there IS a manual out there for them! David, thank you for generously imparting your wisdom from your own studies of humanity and I wish you the best of luck sharing these studies with readers.