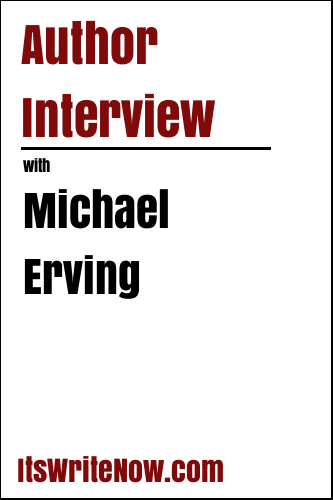 Seen as heroes by the community, the men and women of the PGFD are also human. Just like everyone else, they share all the complexities of the human heart. These firefighters will face the dangers of the job, as they have always done, without hesitation. On this day, however, they will feel fear, courage, love, and betrayal. Some will rise to their professional and personal challenges; others will not. Many of them will not live to see the day end.

Michael Erving has returned today to regale us with more stories from inside the depths of his debut novel ‘Fire and Ice’ before spending a little time with me pondering some of the more challenging questions of the universe. Michael, thank you very much for reappearing with me today. Last time you were here we chatted in depth about your first novel and your approach to writing in general, but I don’t believe that we really delved into what your learnt from your first foray into the world of writing. What do you feel were your biggest learning experiences writing this book?

The hard work of sitting down and putting your thoughts on paper. I had writer’s block many times and feared that I would not complete it.

Now that you look back at how ‘Fire and Ice’ came into being with the knowledge that you did complete it, does anything stand out in your mind as something that you would do differently to make the writing or publishing process easier on yourself?

Nothing. I took the time to write it, edit it, had friends read and edit it or give me hard critique of the book, and had it professionally edited.

The plot evolved in response to the development of the characters.

I like that the plot evolved to fit the characters, rather than the other way around. Now, speaking of characters, I’d like to do a little 180 on today’s chat and move right into the quick fire round so that we fossick a little through your own personality. Let’s kick off with: What is your favourite Jellybean flavour/ colour?

Good choice. Where is the line between insanity and creativity?

In the head of the person. Where he/she defines that line.

Hmmmm. Interesting that the line is defined by the individual themselves without any societal input. Do you keep a book or record of things that you would like to write about at some period in time?

Why doesn’t glue stick to the inside of the bottle?

I have no idea.

I guess you are in the hospital ICU or CCU. LOL.

*Laughs* Makes sense to me. How about this one, if all of the world is a stage, where does the audience sit?

The audience is part of the act.

Aaahhh, so that’s what I’ve been missing! What happens if Batman gets bitten by a vampire?

The bat dies as Batman is the head bat!

Interesting. I’m glad to see that Batman survived, I feel that is very important. Have you tangoed in the snow?

That shouldn’t stop you! What role did books play in your childhood?

Wow, it was clear from a young age that you were destined for a career in the emergency and rescue services. Which makes me wonder if there are any other career paths that you think that you might enjoy?

Helicopter pilot for dropping water on brush fires and a pastor.

I can see you in either of those roles easily. What came first, the chicken or the egg?

God said let it be so the chicken came first.

Chicken it is! And for the final philosophical question of today, who decides what morality is?

God and the bible.

Michael, thank you for showing us your morals and motivations for writing and I hope that we have enticed readers to explore ‘Fire and Ice’.

Want to find out more about Michael Erving? Connect here!