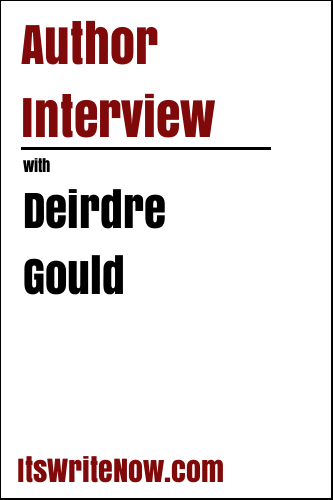 Eight years ago the December Plague swept through the human population of earth. The Infected were driven mad by the disease, becoming violent and cannibalistic, killing even those closest to them without hesitation. Six years ago, the tiny surviving community of Immune humans found a cure, and the Infected began to wake up and realize what they’d done. And what had been done to them. Over time, society began to rebuild itself. Now it is ready to judge those responsible for the Plague. Nella Rider, the court psychologist and Frank Courtlen a defense attorney are trying to establish the truth. But more depends on it than they know. They race to find the answers they need before the fragile remains of humanity vanish for good.

Death and the disease of December are the topics of discussion within the pages of the post-apocalyptic tale ‘After the Cure’, and today I’ve been joined by author Deirdre Gould to delve through the aftermath of destruction. Deirdre, thanks for spending a little time with me today. You don’t often see many post-apocalyptic books moving into the court to assign blame to the cause. What inspired you to explore this direction?

I read far too many zombie books for my own good, and I noticed the “cause” of the zombie invasion was always a virus or a chemical. Never a bacteria. And I started thinking about why. It struck me that a bacterial disease could be cured through medicine (if we were lucky) and I started wondering what a society of cured zombies would look like…

You know I’ve never thought about what a society of cured zombies would look like, but I do have to admit that now I’d like to explore it a little more myself. When you were in the midst of your exploration of this image, did you finding yourself digging into different things like science behind bacteria versus viruses?

Yes, I did an immense amount of research into war crimes trials, antibiotic resistance and psychology to name only a few subjects.

And after resolving those pressing ponderings around things like war crime trials and psychology, what did you find was most pivotal pondering that you hope readers take from the novel?

That guilt is often more complex than villains and heroes. Life is messy.

Life is so messy and much more complex than the single shades of personality that are often shown for villains and heroes. With all of this complexity can you see yourself inviting the characters in your book together for something like a cast party?

Ha! Some of them, for sure. There are a few that I would skip. And snacks would probably be a little…. complicated.

Snacks would be a nightmare. That is one party that I would not want to cater for at all! Did you find that working with all of this complexity was rewarding, or were you rewarded from another aspect during the journey of ‘After the Cure’?

When I was writing it, I think developing the characters were my favourite parts. But now, after so many people have contacted me to tell me how the book has made them stop and think in their daily lives, I think that is my favorite part.

I can see how getting others to think more about their own experiences really would surpass character development. Although character development is so much fun too. Either way, I’m sure the rewards have been enough to entice you towards a new writing project. Can you tell us about what you are currently cooking up?

I am finishing up a space horror series about a generational ship fleeing Earth. They make first contact with a very old civilization on the first possible home they’ve found in 1600 years.

That’s quite an intriguing premise there. When you start writing a new tale like that one, do you start writing once you have that initial threads or ideas, or do you get down and dirty with outlines and plan out the direction before you fire up the Word processor?

I know how it is meant to end, but I don’t always know how it gets there. I usually have most beats semi planned, but my outlines are extremely fluid and the finished product rarely matches the original idea. The character development usually changes the direction of the plot for me.

Do you have any music to get you in the zone to connect with and create characters?

I have different playlists for each book. After the Cure featured a lot of John Murphy soundtracks and Patty Griffin (I can’t explain it either). The new series playlists are lots of game soundtracks like Mass Effect and Dead Space and science fiction movie soundtracks like Clint Mansell’s Moon.

I can see the Patty Griffin, I think she’s got that same vibe going on but she just adds more words than game soundtracks or John Murphy would. Now, moving away from the awesome beats that keep your keyboard busy, towards our final round of slightly sane queries on any topic under the sun I’d like to introduce you to the quick fire question round. And let’s kick off today’s rumblings with: what is your favourite quote?

“I can’t, I can’t stop crying Everyday I’m so afraid Afraid of dying Death already came and got me Cause I’m not living… I’m not living anyway…” (From Death Came and Got Me, Rosie Golan)

Away from the tears, what is your favourite word?

Do you have any tips for self-publishing for other authors?

Awesome advice, and probably one of the best overall sentences that can be applied to life in general. Does you wisdom also extend to random facts? Are you a valuable asset on a quiz team?

As long as it’s not a pop culture quiz. I’m full of useless trivia, but I’m too old for anything more recent than 1990 :)

*Laughs* That works too! On the topic of paws, if you could breed two animals together to defy the laws of nature what new animal would you create?

A catsum (cat/possum) and I would keep it in my purse as a bitey weapon for self defense.

I hope it is at least a little cuddly along with that bitey tendency. What is your favourite line, quote or statement from your book?

Nobody is coming to save us.

And finally, do you have a single piece of advice for other authors?

I’ve forgotten them already! But one think I won’t forget anytime soon, is your story ‘After the Cure’. Deirdre thanks for spending a little time with me today and I hope that others find that they don’t forget to pick up a copy of this challenging tale.

Want to find out more about Deirdre Gould? Connect here!