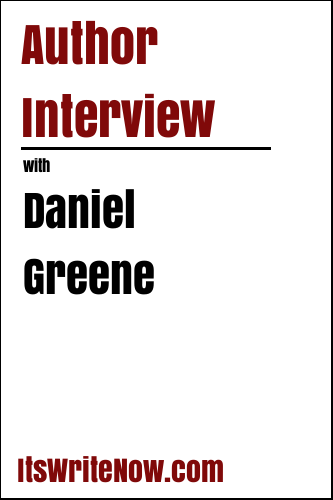 End Time is the first book of The End Time Saga, a gritty multiple point of view zombie apocalypse series. Hell awaits a team of counterterrorism agents, led by Mark Steele. They unknowingly are sent on a suicide mission to rescue a besieged doctor trapped inside the US Embassy Kinshasa. The virus is spreading. The dead are rising. Time is running out.

Will Mark Steele and his team of agents successfully carry out their rescue mission, or will the virus or zombies get to them first? Daniel Greene, author of ‘End Time’ has joined me to chat about battling the zombies through the pages of the first installment in The End of Time Saga. Daniel, thanks for taking us through your own expedition of creativity today. What was the most satisfying element of this expedition for you?

I really love talking to fans about plot theories and different character motivations. It always amazes me to hear about people’s interpretation of my writing. Talking with fans is one of the most gratifying parts of the writing experience.

The interaction that you’ve had with your fans so far sounds fantastic. One day I hope that your fans get to see these characters brought to life on screen and see yet another interpretation of these events. If this was to happen who do you think should be cast in the leading roles?

The main character Mark Steele would be played by Chris Hemsworth. He would have to grow a really nice King Leonidas style beard for the movie though.

*Laughs* I’m sure that could be arranged. Who else?

The main heroine Gwen Reynolds would be played Scarlett Johansson, she brings a beauty to a badass character. Ben Mauser, Steele’s best buddy and elite counterterrorism agent, would be have to be played by David Wenham, he looks similar to the character and really displayed his warrior prowess in movies like 300 and Lord of the Rings. Then there is Dr. Joseph Jackowski, he is the CDC doctor in need of rescuing. He would be played by Mark Ruffalo with glasses of course.

I can completely see Mark Ruffalo as the CDC doctor. Awesome choice of David Wenham too. He’s not one of the first picks that many people would have, but I seriously feel that he would be up for the job. With such positive feedback from your fans, you must be spurred on to keep writing. What writing projects do you currently have underway?

The second book in the saga, The Breaking, will be released May 9th, 2017. I am working on Book 3 of The End Time Saga as we speak! I’ve finished the rough draft and I am so excited about this project. I feel like I’ve really hit my stride on this one. There are some epic battles in store for our heroes and villains, albeit, all of the characters carry traits of both good and evil that give them a very real feel. And the universe is expanding in our characters world, meaning there are many more stories to be told. I also have a backlog of other novels that are waiting to be finished. I will find time…somewhere.

And how do you approach you writing processes to try and work through the backlog of novel ideas? Do you find yourself writing strict outlines and then picking them up later for execution, or are you more fluid with your writing process?

I used to be a fly by the seat of your pants kind of writer. But when you are creating a multiple point of view series with so many intertwining stories, you have to plan. I have intricate mind mapping tools I use, outlining tools, and I write in Scrivener which helps me keep everything organized…mostly. If you looked at my computer desktop, you may think otherwise.

*Laughs* Sounds like some more boxes are needed for all of the paper! Do you have any techniques or rituals for writing that help you work the mostly organised notes?

I write everyday. It helps me to set a target and accomplish it. Once you build this habit, it is hard to turn off, and your writing turns into a steamroll of success. When I am in the rough draft stage, I shoot for 2,000 words a day and 10,000 per week. For one of my novels this means that in 2 and half months, I will have a rough draft. Then comes the rewriting phase…

And then comes rewriting! But that target of 2,000 words a day is substantial. Does music form any part of the habit you’ve built to hit that 2,000 word target?

In general, I love the band The Sword. I listen to them when I work out, write, or am just hanging out. If you don’t know them, listen to them. You will not be disappointed.

I’m not familiar with them, but I will go and investigate them on YouTube after our chat. Other than filling your ears and mind with The Sword, do you have any other behaviors that keep you writing in your chair, rather than being filled with the dreaded writer’s block?

Keep writing. Even if it sucks really bad, keep forcing the words out. You can always delete it. Also, you need to set yourself up for success. Many times I will stop writing before I finish a scene. That way when I am ready to write again, I have a scene that I know about to finish. This helps me segue into the next scene with momentum.

I like that tip of stopping mid-scene. I think that is the first time I’ve had an author use that as a motivational technique. Other than that top tip, is there any other advice that you’d like to pass on to other writers in the self-publishing game?

Keep at it. Write everyday. Follow people who have gone before you and study their methods, learn from their mistakes. You really have to put yourself out there. The worst thing that can happen is for people to say it’s not for me. That’s okay. Not everyone is going to like your work, but if you stick to it everyday and hit that elusive 10,000 hours, you are probably going to be a pretty good writer with a bunch of fans.

Thanks for sharing that worst-case scenario with the audience. If the worst that can happen to you, as a writer is that you’ll have people not like your work then you’re not in too bad a place. Before you return to knocking off a few more of those 10,000 hours of writing, I’d like to get our readers to see the wilder and wackier side of your personality through the slightly weird quick fire question round. Let’s kick it off with: Are you a valuable asset on a quiz team?

Absolutely, I have a background in History and Geography which is pretty much only useful for writing and trivia.

*Laughs* Who said that History and Geography had no applications! You could spend some of your time away from writing becoming a quiz champion! As a lover of words, writing and trivia, I’m hoping you’ll have a great answer for the next question. What is your favourite word?

Ooooh, that is a good Scrabble word! What is your zodiac sign?

A water sign. Perhaps that will have some bearing on the next question: what is your favourite ocean?

I’m partial to the Atlantic.

The Atlantic is a nice ocean, it always makes me think of vast blueness. If you ruled your own country, who would you get to write the national anthem?

All hail the chocolate! And finally can you leave us with your favourite line from your book that you think will tempt readers to pick up a copy?

You can rest when you’re dead. Or can you?

Ooooh, will rest befall you after death or not? Daniel thanks for letting us ponder this question and touring us through your novel, and I hope that this question has intrigued the readers to check out ‘End Time’.

Want to find out more about Daniel Greene? Connect here!