Lessons From Deal Or No Deal 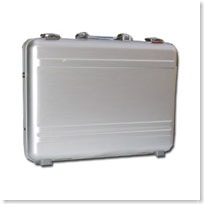 Thanks to the miracle of the DVR I accidentally ended up with a recorded version of Deal Or No Deal. Why would I waste my time on a show that consists of nothing but choosing brief cases and hoping for the best? At least that’s what I thought but I started watching the beginning of the show and got hooked.

It was the second installment of an episode where a woman had already gone through half of the briefcases and she was positive that the one she had chosen contained the magical million dollars. She had friends and family there rooting her on. She had all kinds of rituals and chants for luck. She engaged in kind of a friendly war banter with the banker and Howie Mandel.

I was actually impressed with her confidence and the way she handled being on TV and in the spot light. During the course of this overly dramatic episode we learned who her friends and family were, and how she had been driving the same used car for 12 years, and how much this money would mean to her and her family.

I started identifying with this woman and actually rooting for her, while still being fascinated with the psychology of the show. She confidently carried on with that vision of 1 million dollars in her mind. But towards the end the pressure got to her.

She got close to the end and had a 40% chance of having the million dollars but also hadÂ  a 60% chance of being stuck with a low number case. The banker offered her 267,000$ the suspense gathered and her mom and friends told her to take it. Her confidence was shaken for a minute, but then she snapped back with a no deal.

The next case she chose to remove from the game ended up being her 500,000$ safety net. Which meant that she had a 25% chance of having the winning case, and a 75% chance of getting a case worth less than 1000 dollars.

Apparently her friends and family, and the fear of going away empty handed got to her. Because even though the next offer was 50,000$ less than the previous offer she cracked and settled for 217,000$. Not a bad haul for a couple of hours of work. But then Howie proceeded to go through the motions of which cases would she eliminate next, and would she keep her original case.

Once all was said and done it turned out that she was right all along, and her original case really did contain the million dollars. Even though she still got a decent sum of money she has to live with what could of been. Besides noticing that this show is kind of a demented social experiment toying with those who are most desperate for cash.

I learned another lesson. When your really passionate about something. When you feel in your heart it’s the right thing to do. Don’t let the opinion of others shake your confidence. Usually things are the toughest right before that break through when your about to reap the greatest rewards. So be confident and don’t falter. Follow through with your dreams all the way to the end.

6 Comments on "Lessons From Deal Or No Deal"