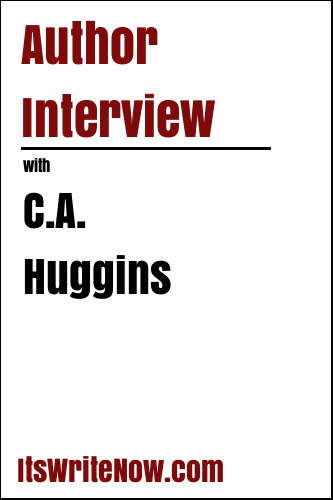 Every morning Kevin Taylor’s alarm clock wakes him up to the cold realization that he has to go to a job that he downright loathes. Nonetheless, he stills wants a promotion. To guarantee that promotion, he goes all out to get his rival co-workers fired, to leave him as the only candidate for the vacancy. This strategy of office terrorism leads him into a string of hysterical events.

Will office terrorism lead you to the corner office with the nice view and big windows? C.A. Huggins has joined me to chat about this underexplored strategy for moving up the corporate ranks in our interview today. I have to admit I love this idea of employing office terrorism to move up in a company. What inspired you to explore this strategy?

When I graduated from college, I worked a lot of temp jobs. The one constant in every job was that it was filled with people who were unhappy with the gig. It didn’t matter if they were there with the company for 2 years or 20 years. They worked every day to inch toward the weekend. And I became enamoured with the idea of spending most of your time at a place you hated.

I think we’re enamoured with the same idea! Can readers expect some of the ideas in this book are from your own experiences within the corporate playground?

Definitely. Some of the characters are extremely exaggerated versions of people I have encountered in my professional career.

How did you work with those exaggerated versions of people? What were you hoping to get by exaggerating out these features of people?

I wanted to make the characters relatable, but also extremely despicable. The main character, Kevin, wants a promotion although he is extremely unqualified for it. But he feels entitled for the position, so he’s willing to do anything to get it (Sidebar: I wrote this prior to last election).

*Laughs* I’m not sure why you mentioning the last election has brought my thoughts straight seeing this novel on the big screen and casting. Who would you cast for the main characters if you had your pick?

I could see Kevin played by Donald Glover. Jake would probably be played by a Franco brother. James? Dave? Any others? Is there a Phil? If there is, I think Phil Franco would be the cheapest option. Alexis would be played by Aja Naomi King. And Robbie Brown would have to be played by Bobby Brown. That’s a no-brainer. That’s also why we’d try to save money by hiring the cheapest Franco.

Your cheapest Franco is Tom, and I like to see that you’ve taken budgetary decisions into the mix there, quite a wise choice I feel. Would you have a cast party with the characters in your book if they could come to life?

Of course. I like horrible people. That’s why I tend to create horrible characters. They’re much more interesting.

*Laughs* They are indeed interesting people. Plus you could probably get enough material for another book if you invited them all to a cast party! When you were writing this book, you didn’t research to make sure you had enough material to work with?

Besides working at a lot of crappy jobs? No. That was all I needed.

Out of curiosity, what is your current position in the corporate structure?

I work in Human Resources. I deal with people all day from all walks of life. So that definitely aids me with characterization.

With a job like that you’ll never be short on ideas for characterisation. Other than having a position in HR helps dreaming up characters, what do you hope readers take from your comical twist on the corporate jungle?

Life is what you make of it. It’s easy to fall into cycles of despair and the need to consume for the sake of consuming. But once you’re done consuming, you’re only left with an accumulation of products. And those products can’t buy you happiness.

What about the journey of writing this book gave you the most happiness?

People getting it. It’s one thing for friends and family members to tell me how much they enjoy it. But when strangers let me know which parts had them in tears from laughter, it’s a whole other feeling.

With such positive responses I have a feeling that you’ve moved onto your next writing project with gusto. What can you tell us about it?

I’m putting out the first book in my series that takes on the thirst for celebrity. It’s called “Shooting Stars”. It centers around a washed up former child actor and an equally washed up former boy band star who go on a crime spree to generate public interest in their careers.

*Laughs* Again, I’m liking these ways that your characters deal with the challenges in their lives in less than acceptable manners! Other than making yourself laugh at the ridiculous situations your characters find themselves in, what drawing you back to the keyboard to tap out another tale?

I write because I feel like I have something to say and people will take interest in it. Now some might not want to read it. And others might hate it. But it’s there for you to feel either way.

When you’re at the start of a new book do you always know the ending, or do you allow yourself to feel your way towards the end?

I always have an idea of how the book will end. Sometimes it changes as the characters and plot develops.

Is there anything you do to keep that plot developing and yourself writing?

I write every day. I try to get it done early in the morning while everyone is asleep.

Do you accompany this working time with music?

Most of the times I write to hip hop instrumentals. Depending on the scene it could be either Pete Rock, the Alchemist, DJ Premier, or Large Professor.

Nice choices. Do you ever find that the music fails to motivate? And if so, what gets you back in the groove?

I’ll go exercise. Get the blood flowing. Then come back and sit myself back at my desk.

When you’ve got yourself working hard, do you find that editing is core to improving your words, or is this something that you like to have completed by a third part?

I do one rough draft. Then, I do another draft myself. After that I give it to my beta readers right before it finally goes out to my editor.

As you’ve seen the whole writing process from writing, to editing and publishing completed, do you have any advice to impart on others considering their own publishing journey?

Never stop writing. And always write what you love and care about.

Before you leave I’d like to see if we can under some more of your interests with our quirky quick fire questions. Let’s start with: What is your favourite quote?

I’m not even sure lonely would be a strong enough term if you’re not comfortable with yourself. Are you a valuable asset on a quiz team?

Of course. My head is filled with so much useless information.

*Laughs* It’s not useless if you can win a quiz with it! What is your favourite ocean?

I like that one too. And finally, do you have any philosophies that you live by?

Thank you for not settling, continuing to strive and sharing your stories with reader throughout the world. And of course thanks for joining me and I will be watching out to see the release of you next published literary adventure.

Want to find out more about C.A. Huggins? Connect here!