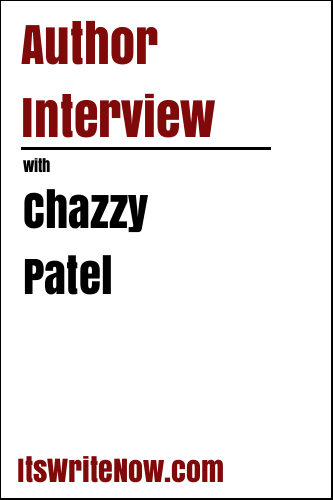 After a brutal incident that left him for dead on an island in Mexico, a man wakes up with no memory of his past or who he is. He decides to go by a new name, Mohammad Wang that just happens to be in his wallet, and build his new life around that new identity. He is not completely comfortable in his new identity, but he is not eager to bring back the old one either. However, at his therapist’s insistence and due to the brief clips of his past life that keep flashing in his mind, he is forced to dig deep inside himself for the buried memories of his previous life. How can he continue to just live as Mohammad Wang when his old and real identity is strongly beckoning him to remember the past? And it is only by doing so that he will solve the mystery of the night Charles King disappeared and Mohammad Wang was born.

Who would you choose to be if you forgot yourself? Would you continue with the threads of your old life, or start again? Chazzy Patel has joined me to chat about the mystery of the missing memory in his novel ‘High Season: The Learnings of Mohammad Wang’. Thanks for sitting down with me today Chazzy to chat about the life of Mohammad Wang. Where did your idea to explore what would happen if someone lost their memories begin?

High Season: The Learnings of Mohammad Wang was essentially a medical suggestion to continue documenting my thoughts, ideas, and things I remembered after my head injury back in Jan 2016. Throwing in my own chaotic past and relearning things about myself, friends, Two manuscripts I had forgotten I had penned, pirates, a tropical paradise, humorous imagination, and a 500-year-old gold heist, I began writing High Season in May 2016 finishing the first draft in June. It is a semi-fictional story about Isla Mujeres, Mexico, me and my imagination. It has been a very personal journey writing High Season and I hope that readers enjoy my fictional take on a very special place. Isla Mujeres, Mexico.

I love the way that you’ve turned around that negative experience of a head injury and turned it into a tale of adventure and fun. I imagine that when you started documenting what you could remember about your life you ended up with huge amounts of material. How did you draw on these life experiences when you were writing?

All of the ones that I still remembered…lol

*Laughs* You’re right, having less memories does mean having less experiences to sort through! Did you spend much time working through these memories, ideas and other thoughts from those two forgotten manuscripts?

Hours. I would spend days reading my Two Manuscripts – The Coin Compass and Atitlan, trying to piece together my own past which had been drafted in a very semi-fictional format. Picking out the truth over the fictional spins was tough, but weeks of researching my own past and reading the classics helped my healing immensely. Some of my favorites are: Marcel Proust, Rumi, Hemingway, Kerouac, Austin, and Salinger.

Top marks for your classic picks! Trying to figure out what events in your life are fiction or fact must have lead to frustration at times, but on the flip side of this frustration you must have found some rewards. What rewards did you find?

It helped me rediscover myself with a completely different perspective. After reading both manuscripts, I had realized I was a pretty shitty writer. A lot of stories and hours of rants, but not that good really. So I attended a few writing workshops, author meet and greets, reaching out to creative professionals in Colorado and Europe to improve my writing. Being a better writer is the most rewarding. Now, I can work on the next novel with a few more tools in my skull.

*Laughs* Love your honesty! The best thing about admitting that you’re an awful writer is that you’re honest enough to go and seek out better tools. How have you turned those tools towards character development?

Many of them are based off real friends. Small pieces of them. In many ways, you could say they are real and walking around Isla Mujeres. You could even walk up to them and say hello, but no, I have taken many creative liberties with the character’s personas for these special characters to actually be real. They are extremely fictionalized with me taking many creative liberties.

Do you feel that you’ve taken your creative liberties to the point where the personalities of the characters changed the plot, or were the events in the story strong enough to push the personalities further than you expected?

The characters were formed by the plot, my old journal, and the drafts of Two manuscripts. One of the reasons High Season was written had been to introduce The Coin Compass. The manuscript was all over the place. When I say that, I mean it takes place on 7 continents and a lot of entangled storylines. Some fiction but most non-fictional events that took place between 2009 and 2014. I still have a hard time working out all the details even now, but it is Book two and with the help of my editors, we hope readers will enjoy it as much as High Season :)

Sounds like you need some better pictures to make it a bit clearer in your mind. Maybe it would all get clearer if you could watch High Season as a prequel movie, and then everything could flow from there. Taking that idea a little further, if they did make a movie out of your novel, who would you like to cast?

If they can get a severely tanned Tom Hanks for the main character. He would do. The guy is a great travel adventure movie actor. As for the others, well, I can’t picture anyone playing any of the characters but the people who inspired them.lol.. Even with all the fictional exaggerations, probably upsetting a few of them (we are human), and creating villains out of friends that are really heroes in the name of creative writing…well, I have had amazing support and love from those people. I can’t envision others taking those places in my heart.

I like that idea of casting the people who inspired the characters. Hopefully they won’t be too upset! If you did have your book turned into a movie, what would be the one big thing that you want the actors to ensure was communicated to the viewers?

Everyone has a novel in them.

Even if you’re a shitty writer. What was the biggest thing that you learnt while writing this novel?

That I am still capable of writing a book. Or at least better than the last ones :)

*Laughs* So no regrets? Nothing sticks out as something that you would change if you had the change to write this novel again?

I don’t think I would do anything different. I wrote this novel as art therapy to express myself, to know I could do it again, and write something unique. I think I achieved that. :)

I think you did too. As you’ve successfully written something unique, where are you planning to take your writing tools next?

I will be working with various editors to improve The Coin Compass and plans on riding around the world on a motorbike in less than a year in 2019. I am in a peaceful backpacker motorcycle gang called Careless Whisper. It was established in 2011 in Vietnam by a few adventure travelers. Hopefully, I can finish 37 countries on an electric motorcycle to help promote our planet’s green transition and to show it can be done by renewable energy. It’s never been done and I’d like to give it a GO. I am hoping my photography and writing skills will allow me to bring my readers more stories that matter to me. And meet future Careless Whisper Motorbike Gang members along the way :)

That sounds like a blast! I’m sure that your writing skills will be a fantastic asset to you on this journey! What keeps you drawing back to writing while you’re undertaking these other adventures?

It helps get thoughts and memories out of my head. Writing has become therapy for me and a helpful tool to understand myself more. After my own research into my work, most of my fictional work is picked from experiences out of journals I’ve kept over the years. They should keep me writing for a few more years :)

Is there any music that helps you get into flow when you’re working through your journals, or otherwise in the midst of writing?

I like to work in complete silent. It seems to annoy me when my mind starts to talk to itself. I do have a track I like to play if my mind isn’t firing off after 60 mins of silent. Ludwig’s 7th Symphony – 2nd movement…It normally does the trick :)

Nice movement there. I can see how it would get you back into the saddle. Once you are in that writing saddle, do you find yourself ever doing much of your own editing, or are you are writer who hates it and would rather outsource?

Editing is fun. First, Get over your first draft. Break up with it for a month every other month. Apologize once a month with a new perspective and loving edits into the writing relationship. Eventually, the relationship between your book and you will look pretty perfect and start to bore you. And that’s when you’ll cheat on it with a professional editor/publisher and the fairytale ends. Not the best method for a healthy relationship but works for my writing :)

*Laughs* It’s certainly a different way to approach editing, but if it works! Other than having such a passionate relationship with your manuscripts, do you have any tips for self-publishing for other authors?

Keep writing. It takes a lot of work but the right words will come to you.

Indeed they will. Earlier in the interview you mentioned that you’ve had a multitude of various differing experiences, and it’s kicked off the question about what you do for employment to be rolling around in my head. Can you shed a little light onto this for us?

I have been working on artistic projects as a novice and professional most of my life. I have literally forgotten many things along the way that pictures can and have revitalized, but the last few years, writing has become a very helpful friend in healing from many of life’s unexpected experiences. Photography and writing influence my emotions and allow me to piece the world together that pleases me.

I’m glad that you’re piecing the world together in a pleasing fashion. Do you think there’s a single quote that shows this pleasure you’ve found in life?

Your task is not to seek for love, but merely to seek and find all the barriers within yourself that you have built against it. Jalaluddin Rumi

I’ve not heard that one before, but I already love it. Chazzy, thanks for sharing your uniqueness with us today, and I hope readers take the chance to follow your voice through the pages of ‘High Season: The Learnings of Mohammad Wang’.

Excited to read the book we discussed today? Find it here on Amazon: ‘High Season: The Learnings of Mohammad Wang ( ASIN: B01NC3F4UJ )‘.

Want to find out more about Chazzy Patel? Connect here!