Author interview with Derek Kohlhagen of ‘The Footsteps of Cain’ 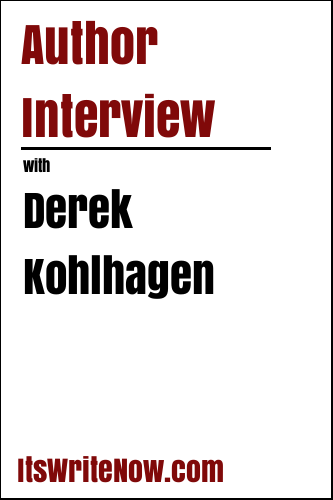 He made a mistake. His punishment? Kill the world. The Footsteps of Cain is a story about a nameless immortal who wanders a desert of his own making, on a planet mostly devoid of life. He is imprisoned to the will of a malevolent spirit…limping toward atonement through a chain of uncountable bloody deeds, and across many millennia. The only thing that keeps him going is the promise of freedom…not for himself, but for a love that he has destroyed. His ages-long road has led him to the distant future, to the planet’s very last settlement of humanity. There, with one final, tired massacre, he aims to end the world. He will find the last remnant of civilization unwilling to enter the void so easily. He will also find that the world has one final, soul-stirring revelation yet left for him.

Years ago, I had an idle, sadistic thought run through my head. I wondered…what if a single person was tasked with the extinction of their entire species? How long would that take? What would such a person need to accomplish this diabolical task? And, perhaps the most important question…what possible cause could anyone have to do such a horrible thing? As I mused my way through these questions and started coming up with answers, I realized that there was an interesting story emerging…beyond the thought experiment. As time went on, I was more and more sure that I was on to something. I needed to see where that story went.

I think that largely the characters that are weathering the hostile world of the Wastes…the lifeless, arid desert that covers the world in the book…are shaped by it. They are focused solely on survival, with no extra luxuries of extra time to contemplate leisure or cultural enrichment. The lives they live are impossibly hard ones, and they are caught in the whirlwind of the events they are forced to endure. The only exception might be the main character, the immortal that has walked the world for so long that he has forgotten his own name. He is the cause of the Wastes, and over thousands of years has placed the world in this sundered state, so in many ways he is the engine that drives the plot. He is a monster that I am very fond of.

I find it interesting that you use the word monster there. To me it kind of feels that your main character is no longer human as a result of his actions. Which leads me on my own thought experiment to wonder what your answer to the question: who decides what morality is?

I’m a humanist. I believe that morality is what best benefits the species that determines what it is. Killing, stealing, hurting others…these things tend to be detrimental for the species at large, no matter how much it might seem to make sense in the moment. Regardless of the source, however, I believe that the golden rule isn’t just a childish lesson we should teach our kids. Its influence shouldn’t stop there. Each of us needs to remember to carry it with us in our heads, and let it guide us as adults so that we can all have a shot of living in peace with one another. Yeah, yeah, I know…happy and fuzzy.

*Laughs* Don’t discount that happy and fuzzy. I think it is needed more and more each day. Keeping with the thought experiment theme, what’s your take on where the line between insanity and creativity is?

That wandering border is placed subjectively. For me, I think the difference is what can be controlled. Insane people have lost control, or have had control wrested from their grip. They are at its mercy. Creativity is something at the whim of its owner’s will. It can be the same kind of unbridled mental production as the delusions of the insane…but it can be directed to be used for a purpose, and seen as something separate from what is actually real (which I know is a subjective judgement in itself :) ).

I love that you’ve connected the concept of control with the creativity/ insanity debate, that’s fascinating. Keeping that creativity in mind, what happens if a vampire bites Batman?

He gets to drive the Vladmobile! (I’m SO sorry.)

*Laughs* There’s nothing to be sorry about with that answer. I LOVE it! *Laughs* Plus I do ask these ridiculous questions to provoke creative and somewhat iridous thinking, so your answer was as expected. Right, back to something a bit more serious. What did you find the greatest rewards from turning this thought experiment into a fully-fledged novel?

Well, as this is my first novel, I came to realize that I could, in fact, produce such a thing. When anyone is initially confronted with the prospect of writing a full-length novel, I think the first question is…can I even do it? It all seemed so huge. 400 pages…120,000 words that I would have to come up with, with all that came with it. Stitching together a story…keeping it logical, compelling, and orderly…it was a daunting thing to consider. Yet, as I doggedly progressed through it, I found my confidence growing. I found that I could, in fact, wrap my head around such a seemingly gigantic thing, and produce something that someone else just might enjoy experiencing. It was an utterly empowering experience. And now all I want to do is keep going.

The journey from unsure typist to confident and passionate author is one of my favourites. Where are you taking this journey now?

I am working on an as-yet untitled first book of a series that will confront the phenomenon of a manipulated morality. It will explore what could make the most angelic of people willingly do devilish things. What would happen if there was a lever in everyone that controlled their moral alignment? What would happen to those people if one had the power to pull the lever all the way from the white into the black? I tend to be drawn to such ideas. I swear I’m a cheerful person. :)

*Laughs* Cheerful people can still have awesome questions and explorations of difficult concepts like morality. And I can see how you couldn’t stay away from an idea like mortality levers – it’s just too intriguing to be left alone! As I’ve already asked you my mortality question, which would have been, a segue here, I’m instead going to pose you my philosophy one: do you have any philosophies that you live by?

Hmm. I think one thing that I’ve learned after 40 years of wandering this planet is that, as long as we do the thing that we’re supposed to do, regardless of whether we WANT to, at the time that it is necessary to do it, things will work out okay for us. I think that success and happiness are gained that simply. Just do the thing you’re supposed do when you’re supposed to do it. And if you don’t know what to do…talk to someone wiser than you to help you figure it out.

Keeping those wise people in the wings is a fantastic idea. As you are now one of the wiser people within the self-publishing space as you’ve tackled that challenge once, is there anything you can impart for others who believe they are supposed to be writers, but are having a little trepidation with execution?

Be patient. Be persistent. Grow a thick skin. The book that you are working on…it’s SO personal. It’s like a child. It’s the inside of your head, spilled out for all the see and critique. That’s the nature of this whole thing. Don’t let yourself be a buoy on the swelling and ebbing waves of other’s esteem. Just do what you know how to do, always strive to improve, and set goals to shoot for. And for cripes’ sake, enjoy the story you are writing! Get lost in it, and really mine into it for those nooks and crannies that will really make it great! Know that you can!

Yes you can! Derek, thanks for taking us on this journey of challenging concepts to cheeriness! And I wish you the best of luck sharing ‘The Footsteps of Cain’ with new readers, and I’ll be looking forward to hearing about your next book release!

Excited to read the book we discussed today? Find it here on Amazon: ‘The Footsteps of Cain ( ASIN: B01HHRF15M )‘.

Want to find out more about Derek Kohlhagen? Connect here!