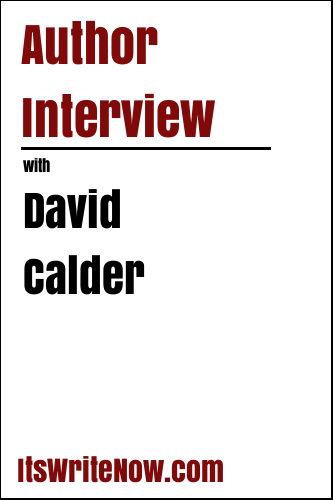 Betrayed and abandoned in a storm, the terrorists are shipwrecked 40 miles north of their target. Determined to fulfil their mission they seize 70 hostages as human shields and charge south on a murderous rampage. Israeli Security forces are caught flat-footed on the Shabbat. At first no one will believe it is happening. Events are moving too fast for Israel’s elite Special Forces to come to the rescue. It falls to a makeshift force; a few Police SWAT team members, poorly armed traffic-policemen and off-duty soldiers, to defend the nation. Can these heroes, fighting a running battle nearly the length of the country, prevent the terrorists from reaching their helpless target and wreaking unimaginable havoc?

Will the nation be defended or will the heroes lose their battle and will havoc ensue? David Calder has kindly joined me today to chat about the battle waged throughout the pages of his novel ‘The Children of Nakba’. David, thanks for taking a little time from your day to share your hard-hitting words with the readers and myself. Where did the striking tale of ‘The Children of Nakba’ begin?

I carried this story around, literally as newspaper clippings in my wallet, for more than 35 years, until I was looking through my repository of ideas for one more short story for a collection, and decided to write it. That was since the morning of the Monday after the tragedy, when I was having breakfast in the student cafe of a US University, turned over a copy of the New York Times, and the story was all over the front page. I read avidly and in horror, found it inconceivable and deeply moving, and said so. An Israeli student friend said, “You simply have no idea what it is like there.” Now I hope I do, a little bit anyway.

As people who don’t live in those regions of the world, your friend was right, we really don’t any idea of what it is like there. How did you overcome the challenge of not having a strong depth of understanding?

I read avidly, had a number of accounts of the event translated from Arabic and Hebrew, was lucky enough to obtain a copy of the Israeli Government’s official report, and visited Israel to walk the same paths as my characters on one of the event’s anniversaries.

Walking the paths would have really helped you hit that emotional tone in your work. Accompanying these emotions in this book are a chain of war-like incidents. Did you have much of a military understanding to support your comprehension of these events before you started writing?

I have a New Zealand army military background from a similar era.

Okay, so that background along with your research would have helped you establish a stronger connection to the true events behind this novel. How did the characters form within this landscape?

Where possible, I have tried to be true to the actual people involved.

Very much the second.

What was the greatest takeaway or learning you had from this intertwining journey of truth, personalities and plot?

Gaining an understanding and great respect for the Jewish people, and for Israel, despite its faults-which all beleaguered nations have.

Can you share how you translated your personal growth, understanding and respect for these people into an accessible message for the readers? What message do you hope resonates strongest for readers?

This has been my attempt to honor those victims in fiction as I would in real life, with respect and a plea for forgiveness for any fact I have gotten wrong. We know the terrorist leader Abu Jihad was desperate to prevent the united front against Israel, (Egypt, Syria, and Jordan) being split. That threatened his entire bloody empire. And he’d had success before finding people to do his dirty work, notably with the assault on the Savoy Hotel on Tel Aviv’s beach from a couple of years before. But what caused these young people to unleash such evil on so many innocents, while throwing their lives away in the process? And once involved, what hold could have been so strong, that it was impossible for them to gather the moral strength to turn back in the interests of common decency?

Communicating that honor for victims with respect can be difficult to capture on paper. Was this where you found the greatest rewards penning this novel?

Yes, from sharing the experiences of and honoring so many brave people.

Have you thought about who would be your top casting choices if the opportunity came up to honor these people by translating your novel to the screen?

I haven’t thought about that. It would be interesting to see the characters come alive on screen though.

Instead, have you reflected on what you would have done differently if you were to start writing this book again, knowing what you know now?

I am pleased with the book, but could have saved myself some rewrites if I had visited Israel first, rather than after I had a complete draft.

I’m sure you’ll avoid the pitfalls of the re-writing trap on your next writing project! Have you already turned your mind to your writing project, and if so, can you give us a little taste of it?

I am writing a follow-up to my first novel, Redemption Cove, set in France, and a prequel to the Children of the Nakba based on the 1974 Ma’alot tragedy.

What keeps pulling you back to writing a fictional twist on historical events?

If I didn’t write, I wouldn’t know who I was.

As writing is so integral to you, are you a keen documenter of your next writing ideas to ensure that you will always have a next project, and in turn will always know who you are?

Yes, I write a lot of outlines, which might become short stories, larger works, or even poems. I tend to create the characters first, then enjoy travelling on journeys with them as they get in and out of trouble. At the very least they are great practice.

Are you practicing everyday?

Yes, I write every day, switching between manuscripts as the mood takes me.

Are there any music tracks that put you into that manuscript mood?

That’s a solid selection there. What happens when you find that the music doesn’t get you into the right frame of mind? Do you keep powering through?

I try to take the pressure off. Do outdoor things. Get decent sleep.

Once you’re fresh again, how do you tackle editing?

I work hard to get the first draft done without looking back too much, then it’s rewrite, rewrite, rewrite. I have my editor do a thorough work over, before having the book repeatedly beta-read until it feels right.

What have you done on the author branding side to align your design and marketing activities with your words to make sure your overall book and brand continue that feeling of ‘rightness’?

This is a work in progress for me as the publishing world continues to up-heave.

The publishing world is fun challenge to take on, but by taking it on I’m sure you’ll see great growth with your author brand. Do you have any tips for self-publishing for other authors?

Has that sense of persistence and unwillingness to give up come from your professional background?

My background is in auto manufacturing, IT, IT Projects, and technical writing. The last thing has helped a lot with discipline and preciseness.

Could you see yourself applying that discipline and precision to another career outside of writing in the future?

Writing is the only thing I want to do for the rest of my life.

Speaking about the rest of your life, do you have any philosophies that you’d like to live by now and in the future?

Respect and treat others the way you would like to be respected and treated.

Finally, can you leave us with some words of wisdom?

“He who doesn’t pay attention to history, is doomed to repeat it.” and “Never attribute to maliciousness what can be explained by simple stupidity.”

*Laughs* Ahhh, the trap of simple stupidity!  ‘Tis very easy to fall down that one! David, thanks for sharing your journey of ‘The Children of the Nakba’ with the audience today, and I wish you the best of luck with your upcoming writing projects and progressing on that goal of being a writer for the rest of your life.

Excited to read the book we discussed today? Find it here on Amazon: ‘The Children of the Nakba ( ASIN: B01806MWE2 )‘.

Want to find out more about David Calder? Connect here!