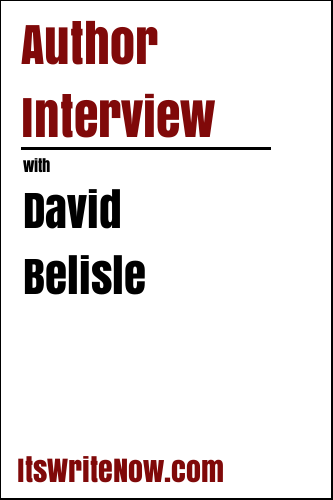 Will the Prime Minster’s plan to recruit vampires to fill the nation’s blood banks work? Will the vampires be able to hit their blood sucking targets? David Belise, author of ‘Full Moon’ has sat down with me today to answer these questions and more! David, thanks talking to me today. I have to admit that I love the idea of the Canadian Prime Minster using the ingenious technique of recruiting vampires to solve the problem of low blood bank levels. It certainly comes out of left field, but you know it could just work. Where did the idea to go on a vampire recruitment drive for the greater good come from?

Did you get caught up the in vampire craze yourself and read Twilight?

I fully intended to read Twilight as research for my book. After 38 references to Edward Cullen’s “tawny” good looks in the first 200 pages however, I felt confident it was time to pull out the skewer and begin.

*Laughs* If you got to 200 pages you did better than I did! I think I managed about fifty pages. After you had picked up enough background references for you spoof, where did you concentrate your focus? Plot or personalities? And did you find that the strength of the personalities changed the plot, or vice versa?

Plot is always the Big Thing. As long as my characters are fleshed out, like Stephen King says, throw them in the scene and stand back to see what happens. To answer your question, you first need to know your ending. There are always turnpikes along the way your characters will send you — but plot remains paramount.

Where do you find your greatest rewards along that turnpike-studded road of writing?

Years ago, my youngest daughter gave me a stuffed laughing pig. She didn’t want me to laugh alone when I was writing. When I nail a funny scene and laugh out loud, I punch the pig and he laughs uproariously with me. That’s the reward.

*Laughs* It’s always better to laugh with friends even if they are stuffed! What writing project are you and your laughing pig turning your attentions to next?

2017 is the Year of the Newfie for me. I’m adapting my screenplay “Newfie, Come Home!” into a novella. This fall I will begin crafting the Great Newfie Epic. Stay tuned.

I will! And good luck with your progress! Other than the opportunity to laugh uproariously with you pig, what keeps you in front of your laptop tapping away each new tale?

Fish swim. Writers write. It’s in my blood. As Ray Bradbury says, “I don’t need an alarm clock. My ideas awake me.”

Are there days when your idea alarm clock runs out of batteries and you’re stuck in the midst of writer’s block?

Writers block gets a bad rap. All it is is an idea simply waiting to happen. Seat of the pants to the seat of chair is the best cure. Your imagination is your guide and it’s always on the clock.

Very large. My writing process is a rough edit in itself. I typically read over the last couple of pages before diving back in, to get the right “temperature.” When done, after over a 100 hours of screen time, I print out a hard copy of the book to give my eyes a different format to run through. A fresh take.

Has your professional work helped you give new strategies for finding fresh takes on getting the best out of your writing process?

I’m a substitute teacher. When I’m teaching writing to students it’s my way of giving back, paying forward and inspiring them to follow their creative dreams. A grade six student last month told me with a gaping grin that he loved filling up the screen with words. That inspires me.

It’s hard not to be inspired by that! What words from other authors, including or excluding your students, also inspires you?

There are so many. I have the following framed Mark Twain picture and quote in front of me when I write: “Go to heaven for the climate, hell for the company.”

*Laughs* Well, why not! If we keep looking up in that heavenly direction, what will we find is your zodiac sign?

It’s different for everyone. For me, that line is laughter.

Laughter is a fantastic line; you’re going to have so much more fun dancing on it! What is your favourite word?

*Laughs* Nice choice! As the vampire expert in this interview, I just can’t let you leave without asking you, what happens if Batman gets bitten by a vampire?

While the sun is up, Robin has the keys to the Batmobile.

*Laughs* Go Robin! He’ll probably have more fun too without Batman trying to take over! David, thanks for sharing your hilarious tale on how to fix critical problems, and I’ll be looking forward to seeing your next sidesplitting solution to some of those big problems in the world.

Want to find out more about David Belisle? Connect here!