Author interview with John Hipskind of ‘Let Us Make Man: The Awakening’ 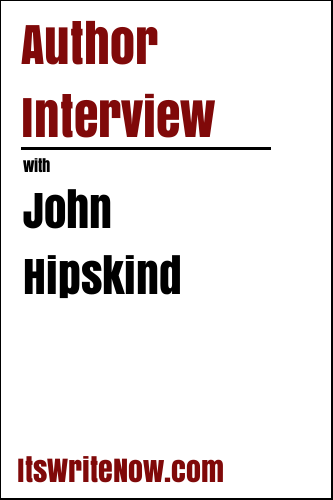 Sometime in the deep past, mankind crossed a bridge inaccessible to all other species. What happened? Why? The story follows the first humans as they cross that bridge in the great unknown.

What lies in the depths of the great unknown? To guide us safely through the abyss of the unknown is, John Hipskind, author of ‘The Awakening’, the first novel in the ‘Let Us Make Man’ series. John, thanks for dropping by today to share the start of your series with us. Going back to that start, how did the first rays of ‘The Awakening’ light up your mind?

The concept originated with an explanation from a nun many years ago as to how mankind came to be.

The existence of mankind is a fascinating concept to tackle. Just that sentence alone has started to fuel a myriad of questions in my mind about different elements that would need to be explored to adequately cover the concept. Where did you focus your questions and research efforts?

Most of the research focused on early man, since the concept was to create an air of reality that imperceptibly devolved into fantasy.

Was it important to you to intersect events from your past into this concept to fuel this mixture of reality and fantasy?

Okay, as injecting elements from your life wasn’t important to your writing, how did the development of other integral aspects of the novel, for instance, the characters build-up?

Some were a given from the start, some just showed up.

Through this mix of personalities, plot and the questions surrounding the existence of mankind, what did you feel was the most important point that you want readers to take from this novel?

Although I wanted it to be somewhat thought provoking, I primarily wanted an entertaining adventure story.

What was the greatest reward you found from taking on this adventure?

Having gone through the full process.

After going through the full process, were there any things that would do differently if you had the time over?

*Laughs* Writing better is an ongoing challenge, but as was mentioned earlier ‘The Awakening’ is the first novel in the ‘Let Us Make Man’ series, so you will have plenty of practice between now and when you arrive at the end of the series. How are you progressing with the rest of the series so far? What’s currently in the process of being penned?

The sequel set in contemporary times: “Let Us Make Man, The Augury”

What about the writing process has pulled you back to work on the second novel in your series?

I write for enjoyment and a sense of accomplishment.

To maximize your enjoyment, do you find yourself planning the ending of each novel before you start writing?

I have a general sense of where I want the story to go, but once started, it takes on a life of its own.

Once the life has been awakened on your current writing project, do you have any routines that you like to do to ensure that you’re making forward progress?

I write mostly early in the morning, until noon.

Do you flip on the radio or any music in these early morning writing sessions?

Nothing. Music is a distraction.

What happens when you are distracted from writing?

I don’t force it.

Once your focus and stamina has been returned to your words, and you’ve finished that initial draft, what happens next? Do you move straight onto editing yourself, or do you like to bring in an editor’s advice?

Editing is huge. I do most of it myself, since the ideas, or the turn of a phrase, or a hundred other things, keeps surfacing as you dig in.

We’ve done some terrific digging into your writing practices so far, but now I’d like to take our spades and dig into a little into the personality behind the pen with our quirky quick fire question quiz. Let’s start with: what is your favourite quote?

“Nothing in this world can take the place of persistence. Talent will not. Nothing is more common than unsuccessful men with talent. Genius will not. Unrewarded genius is almost a proverb. Education will not. The world is full of educated derelicts. Persistence and determination alone are omnipotent.” Calvin Coolidge

Wise words from a well-advised wordsmith. Who decides what morality is?

*Laughs* The awesome authority of the aunts! What is your favourite ocean?

I can’t decide… can I get back to you later?

Yes of course! Where is the line between insanity and creativity?

It pretty much parallels latitude 32.356N

*Laughs* Finally, we have a map reference! What came first, the chicken or the egg?

In your sentence, it’s obviously “the chicken.”

Ahh, you’re trying to be tricky there – good work! Have you tangoed in the snow?

That is wonderful news. I really love those who appreciate the joy of the winter wonderland. If they made a movie from your book who would you choose to play the main characters?

It would look like Boris Karloff with bolts in his neck, and I’d call him Frank.

*Laughs* Clever casting there. What happens if Batman gets bitten by a vampire?

Probably should go to the hospital.

Yep, I agree. That vampire might have something like rabies and I’d like to think that Batman is proactive about his health and would manage that risk of rabidness accordingly. Are you left or right handed?

If all of the world is a stage, where does the audience sit?

*Laughs* I hope they get the luxury of chairs!   How are the colours in rainbows made?

That sounds like some reverse engineering coloring.  That sounds really neat!  What happens when you get scared half to death twice?

A worm and an elephant.

*Laughs* I have no idea what that animal would look like, or what it would do, but I totally want to see it come to life. It’s just too tempting to leave alone!

Ahh, the question for the ages. John, thanks for sharing the fantastical reality of your novel ‘Let Us Make Man: The Awakening’, and I wish you the best of luck with your continuing journey in this series.

Excited to read the book we discussed today? Find it here on Amazon: ‘Let Us Make Man: The Awakening ( ASIN: B01BZB7SOI )‘.

Want to find out more about John Hipskind? Connect here!