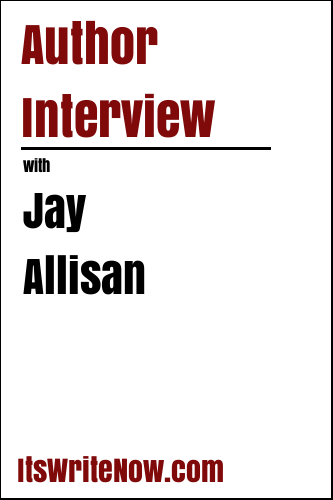 Shirley Mordecai, a widowed homicide detective is obsessed with avenging her husband’s murder. The killer’s about to stand trial, and between the trial and her latest murder investigation, Mordecai’s barely keeping it together. Things come to a head when her best friend gets snared in the murder investigation and disappears, and Mordecai realizes she’s about to lose her family all over again.

Will Mordecai be able to prevent the loss of her family? Will she be able to solve the puzzle of her best friend’s disappearance? To unravel the truth behind the mysteries and murders in Moredecai’s life, I’ve been joined by the mind behind Mordecai, Jay Allisan. Jay, thanks for spending a little time with myself and the readers today to share the secrets from Moredecai’s trials in ‘Along Came December’. What were the origins of Mordecai’s challenges in this novel?

It started with two sentences I wrote in a dream: He’s dead. I already knew that. The whole novel was built off of those two lines.

I always find it amazing to see how a fully-fledged novel can come to life from something as simple as two lines. How did your characters come to life alongside these two lines?

Slowly. I had a vague idea of the majority of the characters when I started the book, though they took on a life of their own as I wrote.

As you found these lives were taking shape, did you find that these personalities were determined by the plot, or were the strengths of the characters so strong that their personalities actually changed the planned events?

The characters drive the plot, definitely.

To make sure that the characters were driving the plot into believable landscapes and events, did you find yourself playing the part of a research detective?

Yes! I researched everything from forensic techniques to police department structures to courtroom procedures to panic attacks. I also read a lot about cocaine. There’s a lot of fact in the book, but I definitely took some creative license.

Did you also use that creative license also used to reshape events from your own life and insert them into the plot?

Yes. I had a panic attack myself once following the death of a loved one, so I drew on that. The rest of the book was more “what if?” What would it be like if this happened to me? What would I do if I experienced this trauma? It was almost like a thought experiment in that sense, constantly asking what if.

I wanted to explore the dark corners of grief and rage, and really see the characters at their worst. From there the story becomes about redemption: about forgiving others, but mostly about making peace with yourself. The story also has an undercurrent of family from start to finish, family being the people you love, not necessarily the people who share your DNA.

From the undercurrents of love to the grief and rage, where did you find the greatest satisfaction during the process of creating this book?

*Laughs* Congratulations making it to the end! Three years is quite a journey. What was the greatest thing that you learnt over these three years?

To be patient and trust that the story will make sense in the end.

Has your patience developed to such a point that you’ve decided to tackle a new writing project, and if so can you tell us a little about it?

I’m working on a (hopefully) shorter novel, featuring a soldier killed in WW1 who’s not quite as dead as he should be. No murder mystery here, but there’s a heck of an unrequited love story.

Oooh, I’m already loving the intrigue! What has drawn you back to writing after the challenges you faced writing this novel?

Because I don’t want to die without telling these stories.

Yes, I use Evernote to keep track of story ideas, and I have a queue of coming-soon projects.

When you’ve picked your next writing project from the Evernote queue, what happens next? Do you do a deep dive into the notes you have for that project and create detailed outlines and writing structures, or do you just sit down and start typing?

It depends on the story. Before I start writing I like to have landmarks, which are scenes or moments that will take place during the story. The number of landmarks varies from story to story, but I like to have at least a rough idea of where things are going. That said, the story will inevitably change, so I don’t like to hold too tightly to my outline.

How do you track your progress and still allow yourself the flexibility of not clinging to your outline?

I write a set number of words each day, and just make sure I hit that target consistently.

Do you use music to get yourself in the zone where you can consistently hit that target?

I like silence, or if silence is unavailable, I write to binaural beats.

Those binaural beats are pretty awesome, I don’t know what it is about them, but they do seem to really work for setting up that laser focus. Do you ever find that you struggle to get that that writing focus setup? And how do you coax your focus out of its hiding place?

When I get stuck I write longhand until I’ve got things figured out. It forces my brain to slow down and think things through.

That’s a really neat idea. I think that the physicality of writing by hand probably turns on different aspects of your brain as well to aid with figuring things out. Once you have everything figured out, do you move onto the editing stage solo, or do you like to entrust the process to an outside advisor?

Thus far I’m my one and only editor. I follow a seven-step editing process, so that everything’s cohesive and polished in the end.

Wow, seven steps of editing, I’m impressed! That has to be one of the most through processes I’ve heard authors employ! Other than being super vigilant in the editing stage, do you have any other advice for authors who are struggling a little and are looking for some kind words to get them back on track?

*Laughs* It really does just come down to doing it doesn’t it? In that spirit of not seeking permission, let’s move straight onto the next section of our interview, the quirky quick fire section where we can see a little more of the person behind the pen. To kick off the festivities, we’ll start with where is the line between insanity and creativity?

No idea. I haven’t found it yet.

Keep looking, it may still be there! What happens if Batman gets bitten by a vampire?

His neck is armored. The fangs wouldn’t penetrate.

I never thought about that, but it’s good to hear that Batman dresses appropriately! What is your favourite Jellybean flavour or colour?

Grape is awesome! What is your best tip for authors?

Write what you love.

Speaking of loves, what is your favourite word?

And it’s inconceivable that I let you leave our chat today without giving you another opportunity to tempt readers to delve into the mysterious depths of ‘Along Came December’. What’s the best line from your book to entice readers with?

And we’ve made it out too! Jay, thanks for sharing some snippets of your writing journey through ‘Along Came December’, and I hope to keep following your author adventures in the future!

Excited to read the book we discussed today? Find it here on Amazon: ‘Along Came December ( ASIN: B01MXVHX6C )‘.

Want to find out more about Jay Allisan? Connect here!