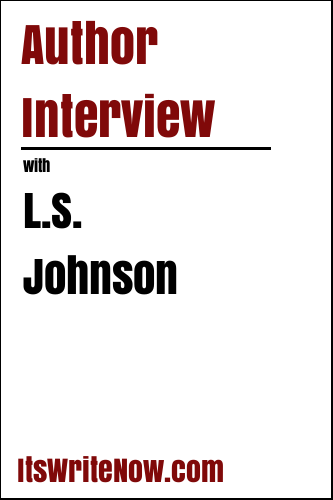 Caroline Daniels must marry, and marry well. But in her remote corner of England eligible suitors are few and far between, and none hold a candle to her closest friend, Diana Fitzroy. When Sir Edward Masterson arrives, he seems the answer to Caroline’s financial worries, though she instinctively dislikes the reticent, older merchant. Soon Sir Edward has set his sights on acquiring both Caroline and the decaying Harkworth Hall. Caroline’s future seems secure, save that Sir Edward’s enigmatic secretary hints at a dark secret, and Sir Edward shows an unusual interest in the nearby bay. To discover Sir Edward’s true purpose, Caroline will have to face the horror beneath Harkworth Hall—and the woman who will change her life.

What horrors will Caroline face inside the walls of Harkworth Hall? Will he life be changed in the direction she hopes? To uncover the mysteries that hide within the walls of ‘Harkworth Hall’, I’ve been joined by L.S. Johnson, the author of this historical romance novella. L.S. thanks for sitting down to chat about the secrets within these halls and its inhabitants today. First things first, what sparked the idea that became ‘Harkworth Hall’?

It actually began with a fairy tale – the structure was initially based on a retelling of the Robber Bride. Many have also pointed out that there are echoes of Bluebeard in there.

As you weren’t intending to mix Bluebeard in there, let’s focus on the retelling of the Robber Bride. Now that’s a fairly contemporary tale. How did you push this 1990’s tale to the 18th century?

I have a trilogy that I’ve been working on for the last few years that’s also set in the 18th century, so I had already done a great deal of research. That being said, I did some further work in English daily life and vehicles specific to that time. I expect to do more work for the Harkworth Hall sequel, looking at shipping and trade, boats, and so on.

You’ve clearly gone into great detail to get those nuances of daily life right. How did you find that the personalities came to life within during this century? Were they constrained or changed by the events that happened, or were the personalities so strong that they changed what you had planned?

There is definitely a magical moment in drafting when the characters start to do their own thing, which is why I don’t outline too deeply: even with my skeletal outlines, whole sections will have to be re-imagined once the characters develop their motivations. With Harkworth Hall, Chase snapped to life almost immediately and called a lot of shots, and then Caroline was forced to rise to the occasion. Which was the best thing for her, really.

When Caroline rose to the occasion, did you find that a message also appeared within the storyline? And if so, what do you hope readers understand?

In all honesty, the most important thing for me was to write a girl-meets-girl adventure. That’s all I set out to do. If other things creep in – say, stuff about empire-building, or trying to control nature, or the ways privilege corrupts your view of the world – that’s just gravy. ;)

I’m finishing a story for the anthology E Is for Evil, and then I’ll be focusing on the sequel to Harkworth Hall. That will take me through 2017. Next year will be devoted to the trilogy. It’s been far too long.

What drives you to write with such fervour that you’ve already planned your writing plans for next year?

Because I can’t not write, sadly. If I quit – and I have quit, a couple times now – I have a few months of respite and then I start developing insomnia, because I wake up in the middle of the night writing scenes in my head. After a year the insomnia is pretty acute … A poet friend once told me she thought there were two kinds of writers, those who choose words to express themselves, and those who can only express themselves with words. I’m definitely the latter, unfortunately.

You should feel lucky that you have such a clear method of expression. It’s much better than struggling to express yourself at all! With such an intense drive to write I imagine that you have many techniques to document your ideas so that you can prevent the insomnia?

I have many books, journals, slips of paper, plus a whiteboard, a bulletin board … I’m finally trying to corral everything into a wiki, but it’s a slow learning curve. I think I need a giant electronic book that constantly re-indexes itself into a proper index. That way I can both find that passage from that book about the cross-dressing women who went to the Dutch Indies AND browse strange photos of animals with equal ease. Still waiting on that.

Keep working on that Wiki. Unfortunately it’s unlikely to give you those wonderful search result combinations, but at least you can search it fairly well, which is more than can be said for stacks and stacks of paper. Working through stacks and stacks of notes can be a drag, is there any music that you use while you’re writing to keep your spirits high?

Music is vastly important to my writing, and the soundtrack changes with each project. I try to listen to only music from the time period, so in this case it was mostly baroque composers. For the domestic scenes, I listened to pieces written for small ensembles, the kind of thing Caroline might have listened to or even participated in. For the more active scenes, I’ve got favorite pieces of symphonies and operas that help set the pace and mood.

I like that you’ve tailored the music to the period of time that you’re working in. Is there any time that you find that the music doesn’t help that mood and pace. What happens when the pace gets bogged down?

Where does editing fall into this process alongside pulling the outlines, drafts and the finalised books?

I always have someone else edit. I can’t see my own work that clearly, and I know of few people who can. Harkworth Hall had at least three editorial eyes on it at various stages, and is much, much better for it.

It’s really good that you recognised that by pulling fresh eyes into the writing process, you end up with a superior product. Are there any other practices have you discovered that also has greatly improved your product process or quality of books you deliver to readers?

Know that this is a job like any other. It takes hard work and dedication, and oftentimes you’ll have to roll up your sleeves and do something that is Not Fun or Glamorous or even Writerly. That’s just how it is. Keep your expectations moderate. For every J.K. Rowling there are thousands, and I mean thousands, of professional writers making less than 10k a year – and even the Rowlings in this profession have spent years, and sometimes decades, in low-paying obscurity. It’s just the nature of this field. Always have someone with editorial skills look over your work – if not as an editor then at least as a proofreader. You will miss things, because everyone misses things. A second pair of eyes will drastically reduce the number of errors in your book, and provide a better experience for the reader – one they’ll be more willing to pay for.

Thanks for sharing those wonderful tips for reducing errors, and I’m sure those tips will help another aspiring author, or maybe another author who is having a little wobble about their dedication. Before I let you return to your progress on your E is for Evil anthology, I’d want to take you dedication for a little spin into the quirkiness of our quick fire round. Let’s start with: where is the line between insanity and creativity?

In the jar where the tea bags are stored. When it’s empty, therein lies madness.

*Laughs* Working without tea! That is true madness! Are you left or right handed?

Right-handed, but the child of two lefties.

If all of the world is a stage, where does the audience sit?

Does a stage necessitate an audience?

Now, that’s a good question. I will have to sit down and think about that for a little more time. What is your favourite Jellybean flavour/ colour?

And let’s continue with the sugar laden treats, what is your favourite flavor of ice-cream?

Of course not! Ice-cream choices are never to be derided! L.S. thanks for sharing your dedication to the writing craft with the audience and myself today, and I hope to see you soon to share the journey around that upcoming anthology.

Want to find out more about L.S. Johnson? Connect here!