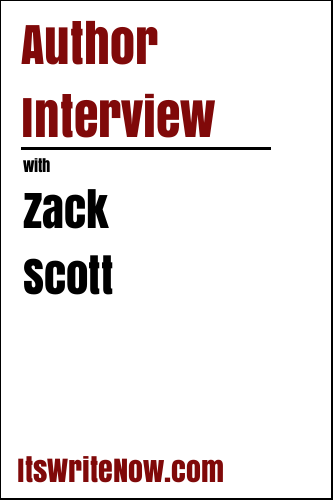 An angry shark attacks Ray and his friends. Meanwhile, a self-proclaimed shark hunter searches for the shark.

Will the shark hunter be successful successfully catch the shark? Will the friends be safe, or will the shark prevail? To pin down some of the answers to these questions, I’ve been joined by Zack Scott, to chat about his novel ‘One Pissed-Off Shark’. Zack, thanks for dropping in to discuss the dangers faced in your novel. What thoughts inspired the dangers that lurk in the fishy tale of ‘One Pissed-Off Shark’?

What if some sharks attack people or animals simply because they’re really angry? I don’t know, I’ve never been in the head of shark. Has anyone? But maybe a shark is having a terrible day, sees a person, and is like, “Screw you, world. I’m going to eat this guy.” Jaws is also my favorite movie.

You’re right we don’t really know how the day of the shark has been. Maybe he’s been having some gum problems or the other sharks just aren’t being nice. Maybe the shark feels that biting humans releases tension like a stress ball. Other than re-watching Jaws, did you dive into any other movies or books to try and find out a little more about things such as the lives of sharks?

I researched sharks and sailing, but the book is intended to be completely ridiculous and over the top.

Have you been able to drop in episodes from your life to get the right level of ridiculous-ness?

I drew from a lot of life experiences for character development. Luckily, I’ve never been attacked by a shark. Knock on wood.

As much as being attacked by shark would help you get that authenticity to your writing, you also run that risk of losing fingers and having a much harder time typing, so it’s good to hear that you haven’t gotten that close to any jaws. Returning to that movie vein, who would you cast if this comical tale would hit the screen?

The cast of Twilight.

Would they be funny enough? We should get it casted and see! What advice would you give the actors as their core message to communicate to the audience?

Don’t go in the water.

At least don’t go in the water without a shark cage! Is this tale the last we’ll see of the beloved shark, or can we expect big things in the future from our favourite fish?

*Laughs* I love your naming technique. Simple and straight to the point!   We’ve now covered most of the points on writing, but I’d like to start pointing in the frighteningly fun direction of the quick fire question round. Let’s start the shenanigans with: What is your favorite song or music to work by?

When Max doesn’t get your blood pumping, what do you do to release the tensions of writer’s block?

Try to write something else.

Something else includes answering the big questions in life. And one of the big ones is what came first, the chicken or the egg?

Maybe it’s a chicken omelette? What is your favorite quote?

Ahhh, those dogs! They’re probably eating that omelette, or the chicken at least. What is your zodiac sign?

With the balance and wisdom of Libra, can you share any tips for self-publishing?

Exactly, why bother doing something you don’t love? If all of the world is a stage, where does the audience sit?

*Laughs* I would say that they might be safe from the sharks there, but you never know. Zack, thanks for sharing some of the laughs from ‘One Pissed-Off Shark’, and I hope that the sharks continue to multiple and eat their way through humans in ‘Two Pissed-Off Sharks’.

Excited to read the book we discussed today? Find it here on Amazon: ‘One Pissed-Off Shark ( ASIN: B007JYWPKS )‘.

Want to find out more about Zack Scott? Connect here!