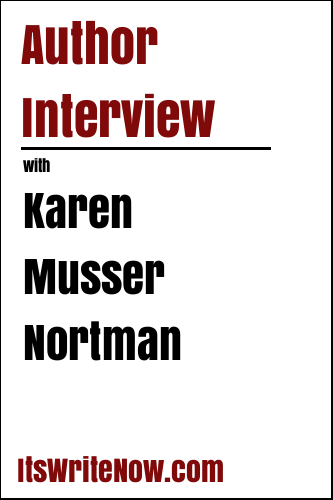 The Shoemakers and Ferraros plan to spend Christmas in Texas with Larry and Jane Ann’s brother and then take a camping trip through the Southwest. But those plans are stopped cold when they hit a rogue ice storm in Missouri and they end up snowbound in a campground.

What does Frannie Shoemaker get up to during the Christmas holidays? Does she have a chance to get away from solving mysteries to relax in the joy of the holiday season? Not likely! To share a little taste of Christmas in July, Karen Musser Nortman has dropped in to chat about the 6th novel in the Frannie Shoemaker series ‘A Campy Christmas’. Karen, it’s wonderful to see you again! And of course it’s wonderful to see Frannie and her companions as well. Can we expect to see all old favourites in this book?

Yes, they are continuing characters in the Frannie Shoemaker Campground Mysteries.

As we’ve previously chatted about Frannie and her friends I’ll link to our previous interviews at the bottom of this interview so we can move straight onto Frannie’s Christmas adventure. What inspired you to write in Frannie’s world at this festive time of year?

A camping friend of mine mentioned traveling in their motor home and being the only residents in a state park, The ranger locked the gate and went home for the night. Several others talked about being snowbound while camping so it seemed like a perfect start for a Christmas story.

*Laughs* As lovely as it would have been to have the state park to yourself being locked in would not be fun! And I can see some struggles too if your caravan got snowbound. Do you have much experience in the snow yourself? For instance have you tangoed in it?

No but that would have been a great addition to this book.

Perhaps it can be added to Frannie’s next festive adventures! This Christmas instalment of the Frannie Shoemaker series is a novella, and a bit shorter than the rest of the series. Has the shorter length changed how you’ve approached the book, or did you still find that this wonderful cast of characters directed the plot to where they wanted to go?

I think the plot is directed by their personalities.   They are a close-knit group of caring people.

And what did you want this tight-knit group to share with readers during Christmas?

The Christmas Spirit isn’t created by decorations and carols, but rather by human behavior.

What did you love most about giving Frannie the chance to share and explore the Christmas spirit?

It was a ‘feel good’ book to write and I think it has that effect on many readers.

Who doesn’t love feeling good? And by sharing Frannie’s Christmas adventures with us in July we have two marvellous opportunities to savour the good feelings in Frannie’s world this year. Karen, thanks for showering us with a little of the Christmas in July joy, and I hope to hear about Frannie’s other adventures soon!

Excited to read the book we discussed today? Find it here on Amazon: ‘A Campy Christmas (ASIN: B018B79HSE)‘.

You can also catch our previous interviews with Karen: