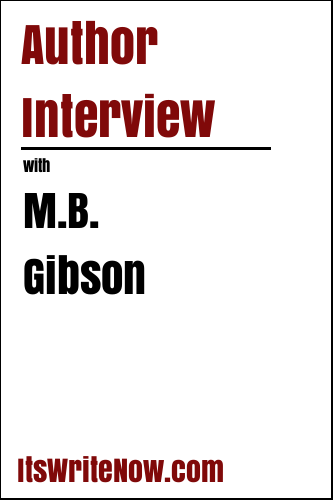 Amidst the lush beauty of Tipperary, a darkness runs through Duncullen Estate. Young heir Richard Lynche is suffocating. Between his father’s disgust and mother’s plunge into drug-induced lethargy, his only solace are the arms of the new maid, Eveleen. Yet, mounting pressures give rise to chillingly ominous visions. Richard must destroy his parents’ chokehold and create a life with Eveleen whilst maintaining his sanity. He’d determined to eradicate the torture. Whatever it takes.

Will Richard really be able to do whatever it takes? To find out a little more about the challenges that Richard faces M.B. Gibson, author of the debut novel ‘Aroon’ has kindly agreed to delve into the darkness of Duncullen Estate with me today. M.B. thanks from coming along to chat about your first foray into the world of published novels. I’d love to hear about how you set out on these first steps of your writing career. Can you start by taking us through how the seeds of ‘Aroon’ grew in your head?

I was looking for an event to send my characters from Ireland to colonial South Carolina. I came across a little-known, but fascinating event that led to the trilogy, The Duncullen Saga, of which Aroon is Book One.

A little-known fascinating event sounds to me like there’s been a significant amount of research that has been tipped into this series. Would that be true?

I did an enormous amount of research, including a trip to Ireland where I interviewed historians familiar with the times and events depicted in my books.

*Laughs* Well if you’re going to do research you have to be through and do it correctly, especially if it means you get to travel overseas. So far you’ve mentioned the importance that place and little known events have had on the plot events. Do you feel that the plot was driven by this research, by the characters or were the characters driving the plot?

The plot was definitely informed by their personalities. Events occurred in the story that I’d never dreamed of.

How did these personalities form?

Some characters were based on historical figures whose names I changed to give me literary freedom. Others were invented, yet they dictated their loves, hates, beliefs, and actions to me as I wrote the book.

One thing that intrigues me about characters is what they dictate to the writers.   Did you have any of your characters dictate who should play them if this saga was translated to the screen?

I have only one idea on that. I’d like Jonathan Rhys Meyers to play Richard Lynche.

He’s a solid Irish choice. I can’t think of any other Irish actors off the top of my head that would slot in nicely alongside him, but I’m sure we could find some great fits. On that Irish tangent, when you were in Ireland did you pick up any quintessential Irish experiences or perhaps other events from your own travels that you included in the novel?

I can’t think of any specific experiences other than listening to people, learning what makes them tick.

After taking so much time to do research, listen to others and find out what makes them tick, what do you feel is the most important message you want readers to take from ‘Aroon’?

Giving up on your true self for personal gain leads to misery.

I hope that your true self didn’t fall into the trap of sacrificing for personal gain. Instead I hope your true self-found many rewards. What do you feel was the greatest reward you uncovered?

When people read this book, they become engrossed in the characters that had lived only in my mind and heart for many years, characters they miss when the story is over.

The biggest thing I learned was that I could do it!

YAY! You can do it! If you could do this book over with what you know now, what would change?

I would believe in myself. So many times I gave up that it took years more than necessary.

But now you know you can do it! And I hope you’ve taken this belief and used it to fuel your writing adventures. Can you share your current writing project with us?

I am writing Book Three of The Duncullen Saga which is presently untitled.

Good luck with the third instalment. What has kept you coming back to write after the first novel was published?

I write for many reasons. One is to place real human beings in historical situations, letting me and the reader understand what it was like to live through certain events when you don’t know the outcome. Another is to feature everyday people in history rather than the ‘big names.’ Their stories intrigue me.

There is a huge world of history out there to explore through the eyes of everyday people. Do you have lots of notes of ideas to make sure you are able to get to them when you’ve finished your current saga?

They’re not written down, but I have enough ideas to take me into old age.

*Laughs* Then you shall never be bored! With so many ideas, how do you sift through what’s to be included in the next project? Do you start with outlines to make sure certain events are included?

Since my books are loosely based on history, I know basically that the Patriots will win the Revolutionary War, for instance. How things will work out for individual characters unfolds as I write, often surprising me.

Okay, so there’s not necessarily a strict fully detailed outline to follow, but you have the big picture in view. When you sit down what helps you get from where you currently to that target of the big picture?

I work with two critique groups who keep me on track. They also help me fight the procrastination with which I am afflicted. Without a deadline, I don’t know if I would get much done.

That sounds like you’ve been afflicted a little by the power of writer’s block. How have you worked past this challenge yourself outside of the pressure generated by the critique groups?

I write something I call a ‘rant.’ I imagine the character I’m working with telling me their point of view in a stream of consciousness and type it out. From that, I can pick up the thread and often get a few good lines to use, as well.

Has music also helped you pick up that thread of thought from the characters?

Since I was writing about 18th century Ireland, instrumental Gaelic songs helped me get in the zone.

When you managed to wrestle past writer’s block, how did you tackle editing?

I submit my chapters to my critique partners who go over the writing with a fine-toothed comb. I then paste excerpts into the Hemingway software, which points out wordiness, confusing passages, and other issues. I use a computer reader and listen to how the story sounds aloud. After that, I send the story out to Beta Readers who point out plotting and character issues. After that, my husband and I go through proof copies ones more time. That has worked well.

Wow, that is a very strong editing process and few mistakes is likely to make it to the final product. Is strong editing your best tip for other authors, or have you learnt other pearls of wisdom to share?

Be brave. Don’t publish until many eyes have read through your work and you have fine-tuned the writing until it is as perfect as you can make it. Sloppy writing can be a career-killer.

Has your career helped you avoid sloppy writing?

I am a retired middle school teacher who has worked with hundreds and hundreds of students. I have taught a variety of subjects, as well. This has compelled me to be as historically accurate as possible and gave me the discipline to research minute details until I can get them right.

That discipline and research mind has already served you well in the world of writing, and I’m sure if you keep a hold of it into the future your work will continue to be of a fantastic quality. Now, if you ever had to go back to a full time profession would you return to teaching, or would you like to try your hand at something else, perhaps a career that challenged your writing skills?

Whatever I do, it would require constant learning. I have found that I get bored easily and need to be interested in something in order to be interesting.

I have to agree with you that good careers have constant learning to keep things interesting. One of the ways I like to keep these interviews interesting for myself and the readers is by challenging authors to answer a set of random questions in our quick fire round, and I’m hoping your indulge my interest today with my current set of crazy questions. Let’s start the fun with, what is your favourite ocean?

Atlantic, since I’ve lived within ninety miles of it most of my life.

Here’s a curly one, who decides what morality is?

This is difficult. There are some morals that all people have, such as basic honesty. Others are determined by ethnicity, culture, or religion of particular people. Some come from individual hearts.

That was a difficult question, but your answer is so well reasoned I can see you’ve been pondering this question yourself. Okay, since I’ve loved that answer so much I’m going to pull out another slight curly one for you, do you have any philosophies that you live by?

My primary philosophy is that we are born vulnerable and spend our lives trying to protect ourselves from emotional pain. We crave love and acceptance, but seek it in many ways. Some are eventually destructive. Those that are satisfying require the courage to risk pain and resist bitterness. Love always.

“Fall down seven times, stand up eight.” –A Japanese saying

Oooh, I like that one. I’m going to have to write that down now. On the topic of writing by hand, are you left or right handed?

I’m a proud lefty. I was disappointed that none of my three daughters shared my trait, but am vindicated since both granddaughters are southpaws.

*Laughs* You won in the end! What is your favourite Jellybean flavour or colour?

Vanilla. And I defy the concept of vanilla as boring!

Really good quality vanilla is never boring! We’ve now almost reached the end of my questions and the interview, but I’m hoping you will leave us with your favourite line from ‘Aroon’ that doesn’t contain even a hint of anything boring to excite readers to run straight over to Amazon. What line can you share?

“Some things are worth the risk.”

And ‘Aroon’ certainly has been one of those things that is worth the risk. Congratulations on getting your debut novel into the world and I’m sure that I will have many readers joining me awaiting the next instalment in the Duncullen saga

Excited to read the book we discussed today? Find it here on Amazon: ‘Aroon ( ASIN: B01GKU35LY )‘.

Want to find out more about M. B.Gibson? Connect here!