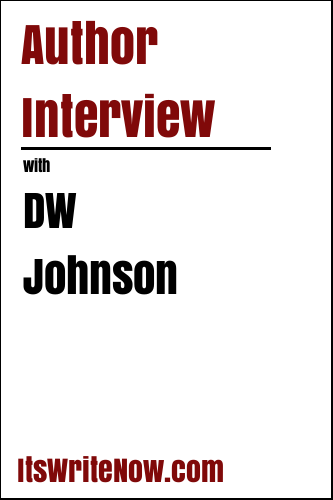 Lacey Darkwater, a fisherman’s daughter, her world is nothing but questions. Alone and on her way home, she makes one small decision that changes her life forever. Now caught up in a continent of turmoil. Young and inexperienced, joined with a power she didn’t ask for she must weight the decision between keeping herself and her companions alive and finding the answers she seeks. Will her friends, the tinker who trusts machines more than men, the healer who sees the world in black and white, the child of the darkness and a drunk running from his past, pay a price they cannot afford? And then there’s what lies in the shadow.

What whispers of lies live within the shadows of Darkwater? DW Johnson, has joined me today to chat about his debut novel ‘Darkwater’ and his expedition into the writing world.   DW, thanks for spending a little time to chat with me today. As this is your first foray into the world of publishing can you set the scene by sharing how the idea behind ‘Darkwater’ formed?

It began 45 years ago when I started playing Dungeons and Dragons.

I’ve chatted with a few other authors who have also found or developed the world within their books by playing Dungeons and Dragons or another similar kind of role playing game. It’s fantastic that these games can be used as tools to develop the skills behind character and world development. To make sure this development ‘rang true’ did you feel the need to supplement your world and the characters with research on things in our world?

No. It all came from within.

As it all came from within you, did you pull out experiences from your life and insert them into the book, or at least use them to flavor the writing?

Yes, absolutely. The book is sprinkled with pain from my childhood.

I’m sorry to hear that your pain has been one of the strong factors influenced your writing, but it is good to see you’ve turned this pain into a productive end product.   What can you tell us about the characters within this product? How did they come to life?

Over a long period of time. Born entirely out of my imagination.

The plot is formed by my characters.

So the characters have made a great deal of impact on the course of events in this book. Have you even taken a moment to think about who might be able to do justice to your characters if you were lucky enough to have your work translated to the screen?

Tough to say. The lead character, Lacey, is a young independent brunette. Inexperienced for the world she is thrust into.

I’m thinking that maybe a first time actor would be a great asset as they would be able to really show that struggle of inexperience first hand. And if you had to share a single point with this first time actor, what would you say is the most important thing that you hope they can bring to the audience?

Women are powerful beings and deserve more respect than they receive.

I don’t disagree there. But some days I think that people in general probably don’t get enough respect. We might touch on these ideas and general philosophies of life a little later in our chat today, but first I want to know what you found that you learnt from this novel?

How to write a book that keeps its momentum.

That is a huge challenge, and a fantastic skill to develop. What would you do differently if you could do it again to improve that sense of momentum?

What do you love most about writing?

Yay! I love it when writers find fun in the writing process. Other than having a blast, did you find any other rewards came from getting this book published?

The overwhelming sense of accomplishment at finishing such a large project.

Over 400 pages of writing is a sizable project. Do you have detailed note-taking practices to keep your ideas in line?

No. But I do have 55 more books ideas in my head. Enough writing material for the next 14 years.

Now I have many authors who say they have tens or hundreds of new books ideas in their head waiting to come out, but few of them actually have all of the upcoming release dates on their websites. And your website has the planned releases for your next four novels until Winter 2018. I won’t get you to share all four in depth, but can you give us a little guidance on what we should be keeping and eye out for on the radar?

Those three books alone will keep you very busy. How much detail do you put into planning each writing project to make sure you’re not getting yourself in tangles? For instance, do you always know the ending?

I have a general idea of how I want the book to end. Although it does sometimes change as I’m writing.

How do you make the most of your writing time to get to that ending?

With 3000 words a day I can see how you’re able to get those books progressing and on target. Is music something that you use to keep your progress going?

Do you ever find yourself getting stumped or having trouble getting yourself to work in that quiet?

Never had writer’s block. I’ve been a professional artist for 40 years and have never run into a block.

That’s fantastic, and I’m sure many of the other authors would be quite envious to know that you’ve never run into these challenges. As blocks haven’t impeded you, can you share a little about the other stages in your writing process? How do you tackle editing?

I have 4 editors that go through each book.

That is thorough! There shouldn’t be many errors after 4 editors have given their inputs. What do you feel are the best inputs for making wonderful process in the world of self-publishing?

Don’t give up and don’t listen to those who say it can’t be done.

It’s very true. You can have fantastic success being an author if you continue to work hard and don’t give up. Before I let you return to getting ‘Shadowmage’ launched, I’d like take a moment to share a little of the person behind the author with our quirky quick fire question round. Let’s start with a simple one: what is your zodiac sign?

I’m not always sure myself, I keep hearing rumors and reports that there is indeed a line out there but I wonder if people are just trying to pull one over on me. What came first, the chicken or the egg?

Why doesn’t glue stick to the inside of the bottle?

Who says it doesn’t?

Yum! Are you left or right handed?

Depends on what I’m doing.

Love that flexibility. Very handy! And no, I’m not going to apologise for the awful puns! Let’s try and use this flexibility for another cause. If you could breed two animals together to defy the laws of nature what new animal would you create?

A dog and a cat. The perfect household pet.

It does sound pretty perfect. But before I get onto ordering them, I’d want to know how much it would shed. What is your favourite word?

*Laughs* I really want to see that word come up in your next novel now! DW, thanks for sharing some of your writing adventures with both myself and the audience and I wish your the best of luck with your upcoming titles and getting Xenkur Chronicles series shared to the world!

Want to find out more about DW Johnson? Connect here!