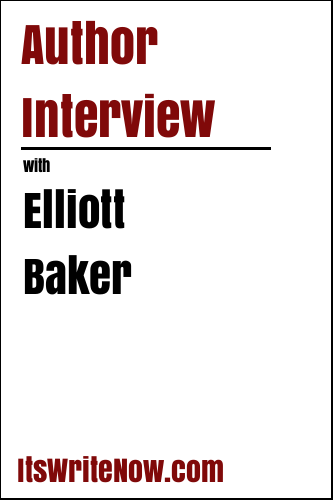 For three thousand years a hatred burns. In seventeenth century France two souls incarnate, one born the child of a prosperous merchant, the other, determined to continue a brutal incarnation begun long ago. In ancient Egypt two brothers are disciples of the pharaoh, Akhenaten. When Pharaoh dies, the physician goes to Greece to begin a new mystery school. The general makes a deal with the priests and becomes pharaoh. One remembers, one does not.

Will the memories of hatreds past burn through? Here to guide us through thousands of years of ill will, I’ve been joined by novelist Elliott Baker, author of the first instalment in the ‘The Sun God’s Heir’ series ‘Return’. Elliott, thanks for guiding us through the ire in ‘Return’. ‘Return’ is a tale that spans from the seemly disparate worlds of Ancient Egypt to 17th century France. How did these worlds initially coalesce together to found the ideas for your novel?

In a dream. One morning, I had the beginnings of a story, the protagonist, antagonist, setting and general outline of the story. This isn’t unique. Most of us have awakened with the thought, “Hey, that would make a good movie.”

Yep, many of us have woken up with awesome ideas, but you actually took your awesome idea and did something with it, which is more than what most have done.  After you had this initial idea,  how did you breathe more life into it? Did you start with borrowing events from your own life?

We are all in the process of creating stories, and I don’t believe it’s possible to write one without at least the echo of one’s life or in this case, maybe lives.

I’m glad you alluded to of those past lives there. Were the topics in your novel like past lives, historical France and ancient Egypt burned into your veins and needing no research, or was a little research required to get the right nuances?

Did I do research? Oh, yes. I love reading a book and taking away something that I didn’t know before. All of the book’s historical aspects and people are real and researched. I just added in some ‘what if’s.’ The seventeenth century had plenty of material to work with. I’ll just add one word. Pirates.

*Laughs*  If you’re going to add a word that is one of the best ones to pick! When you had situated your mind in this world of pirates, or historical Egypt for that matter, did you find your characters immediately coming to life, or was it more work than that?

I’m a firm believer in getting your butt into the chair. Once there, if you sit long enough, the critical factor in your head gets bored and goes to sit on the bench. When that happens, the characters step forward and demand your attention.

You’ve used the word demand there.  It sounds like your characters are either a bit pushy, strong willed or a combination of the two. Do you feel that it would be accurate to say that the personality strength of your characters has changed the events you had planned or were the characters changed by what happened to them?

I would have to say the former.   A character’s personality is formed from the emotional energy of life, bad and good. That energy is creative and forwards the character’s story and mine.

Your characters really do have these large emotional energies. Can you see any actors who would be able to do these energies justice if ‘Return’ was translated to the screen?

That’s a great question and one I can’t just throw off. I’ve actually had a graphic artist draw a rendition of the lead characters, one of which is very close to the picture in my head. One of these days, I’ll send it out there as a gift to the readers. There’s a back-story chapter available now. The link is at the back of The Sun God’s Heir: Return.

A bonus chapter is a nice reward for readers who pick up a copy of ‘Return’. You’ve given many rewards to the readers, but where have you found your own rewards while getting ‘Return’ completed?

Finishing it. That people I know forget that I wrote it while they’re reading it brings me great pleasure. The point of the exercise is to give the reader a break.

During the reader’s break from reality is there anything you hope that they take from your novel back to their own lives?

The acquisition of power will not make you safe.

Was this also the most important learning you took away from writing or did you learn something more striking?

I learnt that you can’t see outside of the circle when you’re standing within. Every writer needs an editor and I am very grateful for mine.

We’ll chat about editors a little later, but I wonder if you could see a little outside of that circle that you were in while writing if there was anything that you feel you would have done differently?

Every thought we have is informed by all the thoughts we’ve had before. Some things can’t be sped up. The mistakes I made, and I made plenty, motivated changes which hopefully you’ll enjoy in the read. In answer to your question, I would have gotten my butt into the chair earlier.

Getting the butt in the chair is very important. And your as your butt has been in the chair long enough to see the completion and release of the second instalment in the ‘Sun God’s Heir’ series, has it also been in the

The Sun God’s Heir: Redemption (Book Three) will be out in October. The conclusion to the Sun God’s Heir trilogy is in edits and I like it. Hope you will too. After that, I have three projects underway which I’ll be happy to share once this one is finished.

Wow, that is an admirable number of writing projects in progress. What have you found that you love about writing so much that keeps drawing you back to create a new project?

It lets me follow characters and stories I’d like to read, but no one has written yet. I was one of those kids with a flashlight and comic book under the covers. Cliché I know, I’ve always loved stories. To be able to hear the thoughts, dreams, and desires of the characters can lift the written word above that of movies or plays.

How do you keep track of those thoughts and dreams while you’re in the midst of writing?

I’m not that organized. Pieces of paper.

I hope at least you have a box to push all of the pieces of paper into to keep the paper under control!  In that pile of paper are there detailed plans for where the story is going so that you know you’re on track?

I’m a pantser. Seat of the pants. I get to find out just like you do, only earlier.

How does the day-to-day writing life unfold for a panster like yourself?

Butt in the chair.

Ahhh, the sweet strains of cool air. Air conditions really do make beautiful melodies. But do you ever find that those melodies don’t help inspire words? What do you do when you’re stuck for words and inspiration?

Butt in the chair.

*Laughs* Back to the plan of allowing boredom to eventually win out and the writing to commence. After the draft is all said and done, how do you go about editing and making sure it’s ready to be published?

You need people to help you. Wonderful, generous, brilliant people.

With adjectives like those, it sounds like you have some amazing members on your team helping you get to that final finish line of publication. As you’ve reached that finish line twice before, do you have any tips of improvement for authors who are currently running their own writing race?

Polish your work until it shines, and then polish it some more.

Are you well versed in the art of polishing in your day job?

I’ve done many jobs. For the last twenty years, I’ve been a musical playwright.

That sounds like heaps of fun to pair your words with music! But have you ever been tempted to dip your toes into the waters of another career path?

I’m good with this one for now.

If it’s working why change, right? Something that has worked well for me in the author interviews has been sharing the writer behind the words in the quick fire question rounds, and if you’re up for some up tempo topic changes, let’s share a little of the Elliott behind the novelist facade starting with the simple, what is your favourite quote?

The only thing in the middle of the road are yellow stripes and dead armadillos. -Jim Hightower

Poor armadillos. Do you have any philosophies that you live by?

It’s impossible to give anything away.

Who decides what morality is?

The context of the moment.

They are all pretty awesome. Are you able to pick a favourite word?

‘Virtually’ Makes me laugh every time I hear it.

I’m not sure, but I think it depends on the day of the week. What came first, the chicken or the egg?

The idea. Then we eat the omelet.

That sounds like one good meal.   Why doesn’t glue stick to the inside of the bottle?

*Laughs* I never thought about glue having free will, but why not! Have you tangoed in the snow?

Glad to hear that! If you invented a monster what would it look like and what would you call it?

The critical factor. That ogre that sits on everyone’s shoulder and says, “Nah, you can’t do that.”

Now that is one scary monster! Keeping our thoughts to the scarier beings among us, what happens if Batman gets bitten by a vampire?

*Laughs* Poor little Batmire. I just have this feeling that the vampire powers wouldn’t mix too well in Batman’s veins and he would be worse off with the vampiric powers. Before we get to the final question today, is there any question that you think I should add in or something that you think we missed?

This was the most thorough interview I’ve had. If you’ve read this far, I wish you all the best.

*Laughs* I’m sure you haven’t bored our readers so far! You’ve just given them a wonderful insight into the world of the Elliott Baker. Elliott, for those readers who are still hanging can you throw a little more enticement for ‘Return’ by sharing your favourite words?

Do not rail at the pattern within which you find yourself. You are not there by chance, and if you allow anger to cloud your vision, you may miss the best opportunity for you to learn that which you are here to learn. – The Maestro

Elliott, thanks for sharing the opportunities you’ve seized to learn during the development and publication of ‘Return’ and I wish you the best of luck to continue your mastery in the third instalment in the ‘Sun God’s Heir’ series.

Excited to read the book we discussed today? Find it here on Amazon: ‘The Sun God’s Heir: Return (Book One) ( ASIN: B01MS3RCE0 )‘.

Want to find out more about Elliott Baker? Connect here!