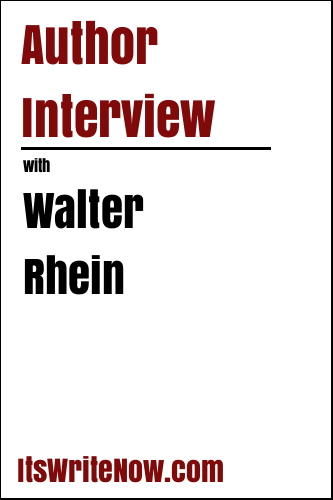 Deserter on the Run Malik emerges from the swamps of Plaiden seeking shelter, food, and the time necessary to take the fever from his bones. But after a barroom brawl lands him in trouble with the local authorities, Malik to flee to the mountains. Now the unlikely protector of two orphaned children with the power to heal with a touch, Malik finds himself at the heart of a revolution destined to bathe the country in blood.

Will Malik survive at the heart of the revolution? Emerging from the swamps of Plaiden, Walter Rhein, has generously granted the readers and I insight into his novel ‘The Bone Sword’. Walter, what sparked the initial idea behind Malik’s trials in ‘The Bone Sword’?

I was living in a really bad apartment in Lima, Peru working as an English teacher. Every so often, I’d catch the daughter of the manager sneaking into the place to rob me of the spare change, etc., that I’d left leaving around (eventually I changed the locks). I wrote this during that time, which is probably why it’s so violent…there was a lot of ambient frustration.

How did this mix of frustration, plot and personality merge together to create this world? Was your focus turned more to the plot and the characters came from this or were characters the first point of call and their personalities influenced the events to come?

I always focus on characters first. It’s fun to create characters with strong, conflicting personalities and then put them together to see what happens. You always have to be true to your characters. Sometimes you can have a bit of an idea as to how the plot will play out, but if you can’t get to the end you imagined while being true to your characters you have to rethink your strategy.

I love that you’re focused on being true to your characters. To really get these stories shared I often feel that there should a strong visual element involved and one of the best ways to do this is to see books being translated to the screen. Which actors do you feel would be able to keep true to your characters?

That’s interesting. You’d need somebody athletic and tired looking. Actually, Diego Luna would make a good choice for Malik, although you could go something like Hugh Jackman there as well. Jackman is getting a little old though. I know, it would be a good role for Cillian Murphy. That would guarantee that the film wasn’t a Hollywood blockbuster (because he’s a bit on the outskirts of fame), but it would make a good film. For the final scene, I think Michael Shannon would be great, but I’ll leave it to you to guess which character I’d cast him for.

*Laughs* We need to keep that element of surprise! Without uncovering too many surprises, can you share what you really wanted to communicate to the audience in this novel?

The book is a very anti-hierarchical social structure in which some people declare themselves to be demi-gods without any real personal merit. We very much live in that kind of society today I think. It’s fun to invent facsimiles of irritating people you meet in real life and then chop their heads off.

*Laughs* Was exacting your revenge in a fiction sense the greatest rewards you took from writing ‘The Bone Sword’?

It was a fun book to write, the story is an anti-epic fantasy. It’s a relatively short book instead of a sprawling ten thousand-page epic. Sometimes you just need a quick story about a guy rolling into town, punching the chief bad guy in the mouth, and then getting the heck out of there.

*Laughs* There is always a nice and place for the epic sagas, but punching someone and then legging it works too! Have you fictional friends been out punching up villains in any new storylines?

My next book is sitting at the second editing stage with Perseid Press. It is a sequel to my release “The Reader of Acheron” which has performed very well. The sequel is titled “The Literate Thief”, and continues the adventures of Quillion and Kikkan in a world where reading is illegal.

Good luck with your release of ‘The Literate Thief’.  A world where reading is illegal is a fascinating concept to explore and I can see why you delved into writing in that world.   What keeps drawing you back to writing about these differing fictional worlds?

Oh, I think most writers are compelled to write. It just helps settle me down for the rest of the day. The thing is, you can’t write all day, you have about 2 hours in the morning, and after that you’re just spinning your wheels. That’s a good thing though because it allows us all to have jobs that actually pay the bills :).

Paying those bills is pretty important and I’m glad that you have enough energy after writing to keep that food money coming in! To make sure you’ve got enough food to fuel your next novel I’ll leave the interview here for today.   Walter thank you for giving us a glimpse into the great depths of ‘The Bone Sword’ and I wish you the best of luck with your upcoming release of ‘The Literate Thief’.

Excited to read the book we discussed today? Find it here on Amazon: ‘The Bone Sword ( ASIN: B00O6LOI8Y )‘.

Want to find out more about Walter Rhein? Connect here!