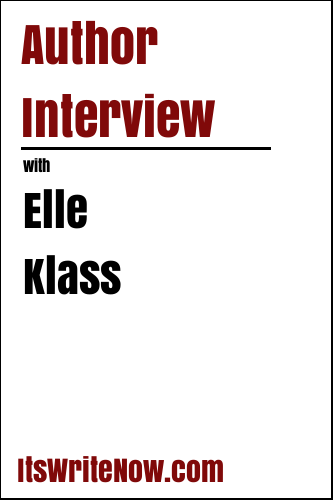 Eye of the Storm is an award-winning book and the first in the Ruthless Storm Trilogy. It’s a twisted tale of one character’s point of view after witnessing something so horrific it triggers a repressed memory.

What else will surface alongside this horrific repressed memory? Elle Klass, author of ‘Eye of the Storm Eilida’s Tragedy’ has kindly joined us to guide us through the murky depths of the horrors of the mind. Elle, what spurred your interest in these fictional exploration memories?

A thought. My mind can be a crazy thing. In my mind, I saw a massive hurricane whipping around a building with a single occupant, tied in a straight jacket. When I started writing the story and characters took on a shape of their own.

*Laughs* It kind of sounds like the start to The Wizard of Oz, although Dorothy was lucky enough to avoid the straight jacket! Have you seen these kinds of ferocious storms in your own life?

Yes, I lived in Virginia and now Florida. The “storm” has multiple meanings such as actual hurricanes and lightning storms to the storm brewing inside a soul or souls.

What did you love most about exploring these natural and internal storms through your novel?

Writing it. It was my first thriller and I loved every minute of creating it and allowing the characters to take the lead and drive the story. After the book was finished I got with an astrologer and realized the character Eilida’s natal chart mapped her life in a sense. With each subsequent book in the series I got with the astrologer, Whobeda, and she drew up natal charts and other various charts that incidentally matched the story. That blew our minds as all I gave her was dates, cities, names but no details of the stories as she hasn’t read the books. It gave us both chills and I believe the characters have an energy.

That’s spooky! Obviously, your characters have an amazing energy. How does the energies form each character in your mind?

They pop in, literally. The only character I knew for sure was Eilida, after that, the rest showed us, named themselves and developed from there. Yes, Eilida named herself too.

Did Eilida also give you a message to share with the readers when she popped in?

There isn’t really a message, at least not from me. The story is meant to be a chilling tale of horror but now that I look at the entire series that spawned from this book a good message might be stranger danger.

When you look back do you also remember how this novel and series changed your path as a writer?

I wrote this in the beginning of my career and my process was still shaky but I learned a story doesn’t have to be written in sequence nor is it necessary to have an outline. It was my panster defining moment. I write chapters as they come and magically they piece together later.

Are you still employing the techniques of a panster, or has your mind turned to embrace planning what you write?

So what’s in your head when you start tapping on the keyboard?

A story usually starts with a simple thought, an image in my mind or video in my head and goes from there. I never know where a story will go, making each an adventure.

Is that sense of adventure what keeps you coming back to write?

I love to write and characters won’t leave me alone until I write their stories.

Can you share a little about the characters who are currently refusing to leave you alone?

I currently am releasing Scarlett, the first book in the Evan’s Girls series which is a spin-off from the Ruthless Storm Trilogy. The series spawned from the readers of the trilogy. I hate to give anything away but Volume 2 The Calm before the Storm introduces an evil character who leaves behind young female victims. Readers were so concerned about the girls they continued to ask about them. I thought about it and this Fall marks the release of the first book starting with the trilogy’s enigmatic character Scarlett. Once read it’s obvious why the series starts here.

Ooohh, well I won’t ruin the intrigue by asking you for more information about Scarlett, but instead, I’d love for you to share with us what your writing routine looks like.

I write when the stories come to me, depending on where I am depends on the tool I use. I’ve sat in a restaurant and typed out chapters on my phone. I’m a “fly by the seat of my pants’ Sagittarius and don’t need to schedule things out. When I write I may sit at my computer for hours, all day with no breaks. Darkness falls and I realize maybe I should take a break and eat.

Yes, I highly recommend eating! Once you’ve worked through another draft and have taken some time to refuel, do you turn your eye towards editing your own work?

I have an amazing editor, Dawn Lewis, who’s been with me since Eye of the Storm. She knows my writing and stories so we make a good team. Over time I’ve gotten better and made less errors but in writing series and spin-offs I can’t say how important it is to have an editor that has read and edited everything you wrote. She catches small stuff along with my silly typos and grammar. I always read through my books many times before she gets them but they still need her careful eye.

How has the combination of reading and re-reading your work, the notes from your editor and making adjustments served to develop your voice as an author?

The more I write the more pronounced and distinct my author voice is. It’s like wine, I get better over time. I think all authors do. The important thing is not to rush a story. I have deadlines but don’t stick to them like superglue. An example I’m on time in releasing Scarlett but off schedule in writing the final Zombie Girl book. I wanted to get it finished and released by the end of the year but it looks like I’ll have it ready by early next year. The story is mostly written but of course will need a few rounds of my editing then I’ll send it to my editor and I don’t even have a cover yet.

It’s interesting to me that you’ve already started to consider a cover before the final rounds of editing are complete, which shows me that you are actively considering your author brand. Can you tell us a little about the thoughts and approach you have taken towards your brand?

Readers of my books grow in numbers daily and the one thing they all have in common is they love my writing and will read literally almost anything I write including my thrillers. I’m known as a character-driven author with more plot twists than a rope full of knots and no matter what I write its filled with suspense. That’s my brand and its developed with me over time. I’m a multi-genre author and write young adult fantasy/mystery and adult thrillers/horror. It’s a strange combination but its what I do and all my books have similar qualities even though the genres are geared towards different audiences. If readers love your work they’ll read it all even if it’s out of their genre comfort zone. I have plenty of readers who admit they couldn’t read my thriller at night and kept the lights on for a week after reading yet they’d do it all over again because the story kept them on the edge of their seat.

*Laughs* Now that’s the sign of a good book! As a successful author, what advice would you share with others looking to take on the self-publishing challenge?

Don’t be afraid to step up and do it. The indie author community is a family separated by oceans and continents we talk daily and our family grows. I’m not talking just author but readers, bloggers, youtubers. You name it! Find your support and let it grow. Before you publish talk and observe in the community. When I go to a book signing it’s thrilling to meet people in person I’ve only talked to online, sometimes for years! Let out your inner author.

I could not have said that better myself! Let out your inner author!

And don’t give up!

No, never give up! I’m sure you’re itching to return to your thrills and chills, but before you do I am hoping you’d let you inner author out for a little run in our wilder set of questions as a part of the quickfire question round. Let’s start the set with, why isn’t there mouse-flavoured cat food?

Mouse flavoured cat food might be considered animal cruelty but then how do people feed pinky mice to their snakes. Of all the cats I’ve owned in my life they don’t eat mice only play, catch and kill them then drag them to my feet. Yuck!

Ewwww. Yep, that’s my number one reason for not owning a cat – I don’t want the ‘mouse presents’. You did mention this earlier, but let’s confirm, what is your zodiac sign?

Sagittarius and proud of it, although my birthday is sandwiched between Thanksgiving and Christmas.

That’s a tricky time of year for a birthday, everyone is so busy! If you invented a monster what would it look like and what would you call it?

I’ve created lots of monsters in my stories. They’re ugly, creepy and have evil intentions.

As a person with an expert’s view on monsters, what do you think would happen if Batman was bitten by a vampire?

If his blood is tasty he’ll get sucked dry and die like everyone else.

Not something to look forward too. Are you left or right-handed?

Right-handed but there are certain things I do with my left hand.

But then, what’s the half-life of having half of a life? Let’s move from the maths back to the power of words. What is your favourite word?

I see a vampirous pattern emerging it, and I suspect that it just might continue with our final question today, where I’d like to entice readers with the power of words to pick up a copy of ‘Eye of the Storm: Eilida’s Tragedy’.

“I focus once more, and I can see a smile with straight teeth. Teeth that make me want to climb my tongue inside and feel around. I explore further and can taste sweetness and spice at the same time. ”

Now that’s quite a meal! Elle, thanks for sharing the horrors sandwiched in the pages of ‘Eye of the Storm: Eilida’s Tragedy’, and I hope you continue to explore the thrills and chills in new novels.

Excited to read the book we discussed today? Find it here on Amazon: ‘Eye of the Storm Eilida’s Tragedy ( ASIN: B00OC2H712 )‘.

Want to find out more about Elle Klass? Connect here!