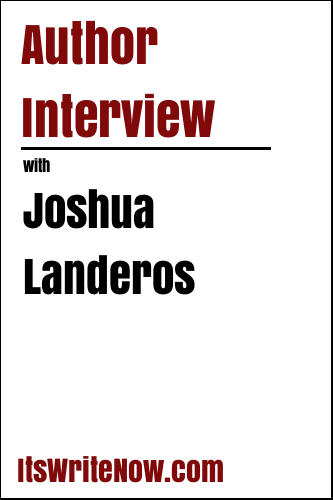 It is April 2065. The White House is now a mere memento from an age long gone, the Pentagon is now a daunting tower that watches over all, and the people have embraced the security with open arms. Enforcing this new world order is William Marconi, just one of an elite super soldier army of 144, 000. Part man and part machine, it is his sworn duty to annihilate any suspected threat to the new utopia. In a single heartbeat, however, William is faced with an opponent he has never known the likes of. Civilian and soldier alike become victims in a bloodbath that threatens to consume all he knows. In order to win, he’ll have to question his allies, his enemies, and himself.

What will William discover while trying to prevent the all-consuming bloodbath? Joshua Landeros, author of ‘Reverence’ has kindly returned to ItsWriteNow.com to chat about William’s world and the new writing projects he has been working towards since we last spoke in May 2017. Joshua, thanks so much for coming back to chat, I love catching up with authors and following their author journey.   Before we chat about where you are today, let’s go back to the start of ‘Reverence’. What inspired ‘Reverence’ to come to life?

The inspiration came mainly from some of my favourite science fiction films, namely Children of Men, V for Vendetta, Dark City, and Blade Runner. What I wanted to instil most was that Reverence wasn’t purely a dystopian world because some of the people are indeed very happy with what their country had become. The setup of the story for me was establishing the fact that the plot would be driven by conflicting viewpoints, not by purely good vs. evil. The most vital point of the novel was the need for people to question their surroundings, which is a double-edged sword for the main character, Will Marconi.

Have you drawn on aspects of your life, or observations from the lives of others when trying to get the right balance for the double-edged sword?

In a sense, yes. While I’m no soldier, politician, or scientist, there was a time when I was blind to many things that go on not just around the world, but even in my own country. I’m a student of history, so I saw that many of the problems that exist in the world have been around for decades, some even longer than that. This moment of realization was what inspired me to add more layers to the story.

Some of the dominant layers in ‘Reverence’ were the characters themselves. How were these layers formed and slotted into the larger story?

My years of binge-watching movies and reading comics. From the Western ‘standoff’ to the overcoat wearing-style of the cyborgs, I was inspired by art as well as real history, especially U.S. history which isn’t as idealistic when you read between the lines.

If we were to take the same stance and read between the lines of your book, what do you hope that readers would take away?

The setup of the story for me was establishing the fact that the plot would be driven by conflicting viewpoints, not by purely good vs. evil. The most vital point of the novel was the need for people to question their surroundings, which is a double-edged sword for the main character, Will Marconi. The ending chapters were some of the hardest to write because I wanted to really sell the tragedy of what these people had been reduced to: both sides resorting to violence and lies to accomplish their goals. There is also a tragedy to Will finally removing his blinders about the reality of his environment, but there is a bit of hope, too. That final chapter represents the need to look forward, but not without forgetting the past.

Were the challenges of working through the tragedy of those final chapters where you found the most rewards looking back on ‘Reverence’?

The dialogue and action are always fun to write. In fact, I love writing a good action scene, but in many cases, dialogue can be a lot more telling about a character’s demons or motivations.

I write quite literally because I have a story to tell. If I don’t tell the story, then I’d be torturing myself.

Don’t torture yourself! Writing is a huge experience, and you want to make it as fun as possible. What have you learnt about writing over your career that has helped you avoid any writing torture?

Editing is not a one-man job. Always seek help and a second, maybe even third, opinion.

Indeed, feedback is one of the best ways to improve your writing. Other than of course to keep writing. And I know that you’ve kept writing, so what can you tell us about what you’ve been up to? Where is ‘Reverence’?

Reverence will be an ongoing series that will be told in arcs. The initial sequel arc, comprised of three books, is the End of Knighthood trilogy that just had its latest release this month. The next arc, Voice of a Crimson Angel, will release in January 2018.

Oooh, that’s very exciting! With the release this month and the new release in January, there’s hours of action ahead for the keen readership! And one thing I’m sure our keen readers would also love to explore is a little more about the writer behind the ‘Reverence’, so I’m hoping you’ll take up the challenge to answer some quirkier questions and share some snippets of your mind. Let’s see which snippets we can share with, what happens if Batman gets bitten by a vampire?

Something along the lines of Blade from Marvel Comics.

Marvel already has the answer! I’m going to have to get a new question then! Are you left or right-handed?

Maybe, or maybe not. I think it depends on how fast these frights are occurring. If you could breed two animals together to defy the laws of nature what new animal would you create?

I love the idea of a crocodile-shark! Maybe that’s something you could explore after the completion of the next arc in the ‘Reverence’ tale. Joshua thanks for sharing a taste of ‘Reverence’ with us today, and I hope to hear more about the new arc soon!

Excited to read the book we discussed today? Find it here on Amazon: ‘Reverence ( ASIN: B01D2A51YY )‘.

Want to find out more about Joshua Landeros? Connect here!