Author interview with Jacques Duvoisin of ‘Girl Fights Back’ 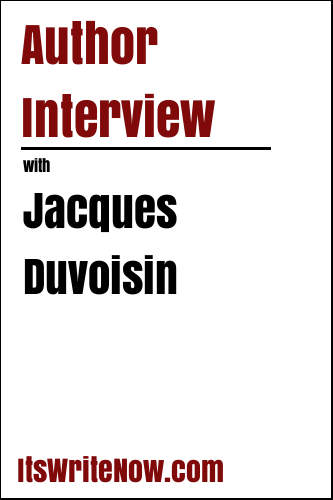 A military-genetics experiment gone missing captures the attention of every intelligence agency in the world, and they will stop at nothing to find it. Meet quiet, unassuming Emily Kane. Her only passion is the martial arts, and her only friends are the boys from the dojo. Not until a trained assassin attacks her on a college visit, does she realize the danger her family secrets pose to everyone she cares about. Now, using the skills she learned from her father, she takes the fight to her enemies and discovers an alarming talent for mayhem. The only thing more terrifying than the men hunting her is what she may discover about herself.

What will Emily uncover while protecting the ones she loves? Jacques Duvoisin, author of Girl Fights Back, has kindly set aside a little time today to guide our meanders through the mayhem in Emily’s life. Jacques, where did your musings behind this mayhem originate?

The book was suggested to me by conversations with my ten-year-old daughter about her karate class. She thought the little boys in the dojo were breaking the rules and hitting too hard in sparring. Her mother suggested that she might fix the problem by hitting them as hard as they were hitting her. My daughter thought about this for a few days, and then confided in me that she couldn’t follow her mother’s advice, “because then I’d be breaking the rules too.” The following summer, she became interested in writing stories, and I suggested that we might try to write a short story together, in which we described the girl who could follow her mother’s advice. That was the beginning, and the first book in the series grew out of that little project.

Awww, I love the honesty that your daughter had for the situation she found herself in and I hope that she keeps it as she grows up. And I love your idea to give your daughter the gift to explore her mother’s advice while keeping inside the rules. Did you have much of an insight into the world of karate before you started the project with your daughter?

Yes, I drew on my own training in the martial arts — in judo and kempo — as well as on my experiences observing my daughter’s karate class. I also did extensive reading on the spiritual background of the martial arts we associate with the Shaolin Temple, and in the history of Buddhism in China and Japan.

There is so much to the spiritual background of martial arts and history of Buddhism. What did you feel were the central ideas that you wanted to share with the audience that came from this exploration?

Violence has consequence, even when you win the fight. The heroine confronts the people hunting her, but the cost is high to her family and friends, but also in terms of the remorse she experiences for the violence she is forced to perpetrate when she fights back. She is dynamic, bold, and resolute, and has to entertain terrifying thoughts about herself, but I mainly think of her as the remorseful heroine.

You don’t see the role of the remorseful heroine much in literature. How did she come to life?

I discovered the heroine by reflecting on my wife and daughter, my nieces and nephews, who are bright, intrepid people, bold and daring, but thoughtful and reflective. They were my inspiration.

I really love that you’ve been inspired so much by your family. Has taking their inspiration and turning it into a story been the greatest reward for you when working on ‘Girl Fights Back’?

I had written short stories and children’s books before undertaking this project, but I’d never written a full-length novel before. It was an adventure to discover that I could develop a story on this scale, a thrilling, daunting, and ultimately satisfying experience. I was so moved by it that I continued to work on the central characters in six more books, and am currently working on the eighth book in the series.

I love hearing when authors get so moved by a story that it turns into something so much bigger than they ever expected. And I’m so happy to hear that you’re still working on these tales books later. Let’s share all this happiness of a good story with our readers by sharing a little about this eight instalment.

I’m currently working on a book set in France. The heroine from this book has continued through the entire series. After high school, she entered the US Naval Academy, and then served in the Marines as a helo-pilot. Later, she served as a military attaché at the US embassy in Beijing. Now, on a family vacation in Europe, she is caught up in a terrorist attack on the Louvre. Little do the terrorist know, they have awakened a sleeping dragon.

I’d watch out if I were that terrorist! What do you feel has moved you so much about this story and writing, in general, to keep you coming back for more?

I love my characters, and I love following them through each new adventure. In order to find out what happens to them next, I have to keep writing.

There’s usually an image that guides my writing, but it isn’t always as definite as an ending. Sometimes it’s a visual image, sometimes it’s a phrase or a conversational exchange… once it was the glint of moonlight off a sword. Exactly how the story gets to that image is something that unfolds as I write.

The glint of moonlight off a sword, now that is an awesome picture to keep you at the keyboard. Have you set up any structures or techniques around your writing to maximise the time you get to spend with these pictures or the characters themselves?

I try to write every day, but circumstances don’t always allow this. I am a college professor, and my teaching schedule sometimes requires that I set a project aside for a few weeks or even months. Mostly I write on the living room couch each morning, while my wife plays the piano.

Do you also edit in the same fashion?

I edit as I write, but I also use a professional editor and proofreader, each of whom I have developed a working relationship with over the years. I think it is every author’s responsibility to present their readers with as professional a product as they can.

Over the course of these eight books and the accompanying picture books, do you feel that your voice has progressed to be more professional or polished?

I’m not sure how my voice has changed, but my willingness to let my characters develop in more complex ways has grown. Describing nuances of the inner life of the characters is difficult, and requires sharp skills of self-observation, and I pay attention to this in my interactions with students and colleagues all the time. Everything can teach a lesson about how people think and respond to situations.

Do you feel that paying attention to these nuances has also helped you to solidify your brand as an author? And if so, what steps have you taken to build up your author identity?

Yes, I think about this all the time. Writing a series has allowed me to brand each book within the series, and this has worked well for me. I am also working on a second series, which I haven’t begun to release yet, and this will have its own brand, distinct from the first series.

Having a series of books really does lend itself to brand-ability as you have that common thread there to communicate to the readers. With so many books under your belt, you now have significant experience in the world of self-publishing. What have you learnt that you feel others should take away and implement themselves?

First, just keep writing. There are so many excuses to give up on a project or to hide from the rigors of the writing process. Whatever else happens around them, a writer keeps writing. Second, don’t rush to publish. Let your first draft cool off for a few weeks and look at it again before pulling the trigger. Third, don’t be afraid to spend money on your work. An editor is important, as is a proofreader. If you want people to buy your product, make sure it is as good as you can make it, and the fact is a professional editor can see things you can’t. Finally, hire a professional cover artist to do your covers. It matters, because the quality of the cover tells potential readers a lot about your commitment to your work.

All of those are fantastic points, and I think my personal favourite is don’t rush to publish! There’s nothing wrong with writing your next book while letting your last one cool off a little. That time to settle will make them both so much better. And outside of the world of publishing, I like to make these interviews better by stretching the minds of authors using a few curly quickfire questions. So let’s do some stretching with, if you’re in a vehicle going the speed of light, what happens when you turn on the headlights?

Nothing. The speed of light is a limit condition of existence.

Are you left or right-handed?

*Laughs* I do love how it just rolls off the tongue! To end today’s chat, what’s the one phrase from your book that you feel just rolls off your tongue and into the hearts and minds of readers?

Mercenaries hunt a lonely, weaponized teen. It’s time to stand up to them.

Indeed it is! Jacques, thanks so much for taking a few minutes to share the journey you took to bring ‘Girl Fights Back’ to life, and I’m sure I’m not alone in looking forward to the next instalment in the series.

Excited to read the book we discussed today? Find it here on Amazon: ‘Girl Fights Back ( ASIN: B005CIRTSG )‘.

Want to find out more about Jacques Duvoisin? Connect here!