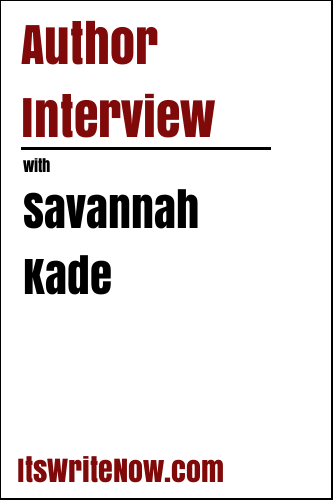 Walker Booth knows that he and Jenn have simply hooked up, not fallen in love or anything like that. He’s committed to chasing his dream, and he’s carved out a great if unconventional, life for himself. So why do his paintings all start to have Jenn’s face? When fate throws them a curve, Jenn may be too busy trying to right the trouble of her past to see that Walker is full of surprises.

What surprises await Jenn while she tries to right her wrongs? Savannah Kade, author of ‘Wildest Dreams’ has joined on a surprise-seeking hunt today to find out what fate will throw towards Jenn and Walker. Savannah, what are some of the things that we can expect fate to toss to our heroes in ‘Wildest Dreams’?

WILDEST DREAMS is a friend to lovers story — Artist Walker and sensible lawyer Jenn are hot friends with benefits, but Walker doesn’t fit Jenn’s future. She knows what she needs and her method of making lists and checking them off has gotten her out of a rough childhood and onto the fast track for partner. But Walker can’t figure out why all his paintings start to bear her face. And when life throws them a curve, Jenn has to re-evaluate what she’s thought of Walker. Maybe they can be more to each other? Or maybe they can be everything.

The inspiration for this book was a list my friend made of her ideal man. It was a great list until we started trying to imagine this actual person, and he had almost nothing going for him.

*Laughs* It’s just as well Mr Ideal doesn’t exist then! And it’s a great lesson to remember. What was it about this exploration of Mr Ideal vs. Mr Real that you really wanted to share in ‘Wildest Dreams’?

How did you pepper the unexpected into ‘Wildest Dreams’? Did you use events from your own life?

Absolutely! This series–Hollywood Nights–is largely drawn from my experiences being single in Los Angeles. I lived there for ten years. I partied with some minor and major celebs; I held ‘regular jobs’ and odd jobs. I had my own crowd that Jenn, Bree, Zoe and Jessica are loosely based on. I lived in “Zoe’s apartment” and attended UCLA. So a large portion of this book has been lived!

That life gets in the way! No matter what I do, my best-laid plans will get thwarted. So I gave Jenn a good dose of that in the story!

*Laughs* Life is pesky that way! What did you love most about the challenge of writing a story while keeping life at bay?

I always love when the ending comes together. When I finally know how they get their happy-ever-after. Then I just keep writing until I hit “The End.”

After battling through life to reach that ending it must be incredibly satisfying to type those two little words. But satisfaction can be short lived and I imagine that no longer after one adventure is penned another one is developing. What’s been developing in the wings since the publication of ‘Wildest Dreams’?

The Hollywood Nights series wraps up with book 4 — HOLLYWOOD ENDING — which releases on Nov 16th! Next up is the BREATHLESS series, set in a small town in Georgia and following a series of Southern families. First, we’ll meet the Mayfair sisters with DeLaney Rose and Finn–the high school sweetheart she let go because she had plans that didn’t include him.

Good luck with your release of ‘Hollywood Ending’. November 16 is not long away now! And the news about the new series is also very exciting for readers who want to make sure their bookshelf is full in the future! What do you love about writing and filling the ‘to read’ lists of others?

Because I can’t not write. I’ve been writing since I was eight years old, and I’ve never stopped.

Is one the reasons that you’ve never stopped been because you’ve always had ideas in your head? Are your characters always introducing themselves and asking to be written, or do they just pop up when you sit down at your desk to write?

I always know the characters before I write. A lot of authors say their characters surprise them. Mine do, but usually not in major ways–the characters must drive the story, so I already know who they are and why they do things.

Does knowing your characters also translate to knowing your story before you start? Is the ending something you can expect or does it appear along the way?

I always know the ending first. How I get there can change, but I could always write at least the last page before I even put the first word down!

Is having this end in mind one of your strongest writing techniques you’ve developed over the years since you were eight? Do you have other techniques that trump this one with regards to effectiveness?

I’ve been writing a long time now. So I don’t write every day. But if I go a while without it, I get itchy and that always brings me back. I have two kids in high school, one applying to colleges right now, so I don’t have the chance to have a steady schedule writing. But my desk is my heaven. If only I could see it . . .

*Laughs* Ahh those desk demons who insist on stacking everything on your desk at once. I hope you can banish them soon! Maybe if we work together we can banish them by tossing them a few of our quick-fire questions. Let’s trying getting rid of them with this one, why is lemon juice made with artificial flavour, and dishwashing liquid made with real lemons?

I know this one! I have science degrees! Because real lemon juice will go bad. But dishwashing liquid has all kinds of preservatives in it and no one cares!

So there IS a reason! I thought it was all just a marketing ploy. Good to know. And maybe here’s another question you can answer with your science-y background. Why isn’t there mouse-flavoured cat food?

If there was mouse-flavoured cat food, who would test it to KNOW it was mouse flavoured? Ew.

I totally agree. Ewwww. It sounds gross, and maybe it’s that gross factor that makes it hard to market. I mean who wants to buy mouse meat for their cat? Not me! But we can’t end our chat on a gross note, that’s not good at all for marketing a romance book so can you leave us with your favourite line from ‘Wildest Dreams’ to spark our wild romance thoughts?

“Let’s just say I wasn’t making good choices,” Jenn told her friend. “When he helped me get the key in my lock, I kind of jumped him.” Lissa shook her head in that tight way she had, “That actually sounds like a pretty good choice to me.”

*Laughs* Jumping him sounds like a good choice to me too! Savannah thanks so much for sharing the romantic dreams of ‘Wildest Dreams’, and I wish you the best of luck with the upcoming end of this dreamy series.

Want to find out more about Savannah Kade? Connect here!