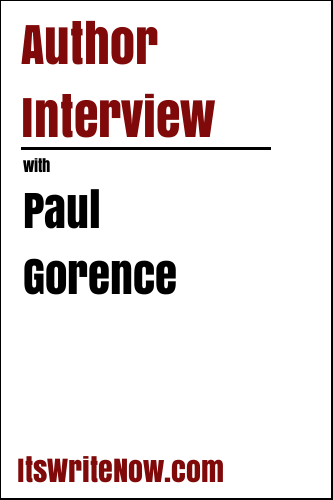 When Augustus Caeser (AC) Deecee, Louisville Metro Police Department’s lead detective, encounters a streak of impossible murders, he’s at a loss for the first time in his career. What can he do when the murder weapon is a fighter plane fresh from WWII, or a bunch of American Indians straight out of the Wild West?!?! The problem is Ken Stillwater, the narcissistic assistant manager at a Wal-Mart, who has discovered a book on “sympathetic magic.” Suddenly, Ken can eliminate everyone who’s been getting him down, inflicting dramatic deaths just by picturing them in his mind. Finally, he’s going to get all the attention he richly deserves. Unless AC Deecee can put a stop to it……

Will the detective be able to stop Ken, or will the magic and murders continue? To find out Paul Gorence, author of ‘Reflections In My Mind’ has dropped in to chat. Paul, what inspired this tale of sympathetic magic?

I was sitting on my bed watching TV. The dresser mirror sat next to the TV and as I watched TV I caught a glimpse of myself in the mirror, and for just a second I thought that what I was looking at, just wasn’t real. My creative mind took over from there and I began to formulate the novel.

How did the characters come to life during this period of novel formulation?

They just appeared as I wrote. I had a basic idea of each scene in the book, but the specifics came out in the writing.

Were some of the specifics that you found in the writing borrowed from events in your own life?

Only the fact that I live in Louisville, KY my whole life. And that is the books’ setting. Louisville is big enough to be considered a large city. Maybe not like New York or Chicago, but large enough…..

It’s certainly large enough to create a great story. In your mind, what was the central idea that you wanted to share in this great adventure?

It’s a very unique story, and in the end, the bad guy gets his just deserts.

Was giving the baddie his just desserts the most satisfying aspect of getting this novel published, or were you struck by something else?

Finishing it. It took much longer than I had planned. But the time I put into it, was well worth it.

What else did you feel that you learnt while writing ‘Reflections In My Mind’, other than getting a better sense of how long it takes to create a story?

Maybe edit myself a little better and make the story flow smoother from the get-go. I should edit every day, instead of waiting until the end of the book.

You didn’t edit every day, but can you share the writing techniques that you did use?

I write every day for a set time. I write at least one hour, but I’m free to go on as long as I like. It doesn’t matter how many words I write. It could only be one sentence in that hour. As long as I’m putting in the effort.

Do you have a clear end game in mind when you’re putting in that hour of effort?

I know the ending, but story comes to life as I write.

What appears in your mind as the story comes to life?

Everyone I’ve ever met, seen or listened to. I hope I have no limits.

Is finding your limits one of the reasons why you write, or do you write for other reasons?

I love to create the story and I love to have others experience it with me.

What experiences are you currently cooking up for readers?

A love story called “Wyni’s Perspective”. A middle-aged woman’s journey to find love after a harsh medical set back in her life.

That sounds like it will be quite an interesting experience to take your readers on. But before readers can look into the pages of ‘Wyni’s Perspective’, can you round up today’s interview by sharing a taste of the experience of ‘Reflections In My Mind’.

After seeing the ninth, horrific and gruesome murder, “I think I need me a frickin beer!” said Carlos.

After nine murders it a beer sounds like a good move. Paul thanks for spending some time to chat with me and I hope you continue to build new experiences for readers to enjoy!

Excited to read the book we discussed today? Find it here on Amazon: ‘Reflections In My Mind ( ASIN: B075679GCQ )‘.

Want to find out more about Paul Gorence? Connect here!