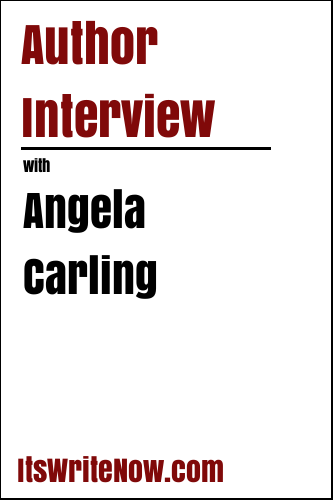 Belakane lives during the terrifying age of the Salem Witch Trials. And, unlike the women around her, she actually is a witch. When Belakane’s magic gets her best friend Martha accused of witchcraft, the powerful sorceress creates a risky enchantment to protect what’s left of the small group of friends who hide her secret. Will Belakane’s power save her friends or will it be the demise of all she holds dear?

Will Belakane be able to protect the ones she loves? To explore the magic surrounding Belakane in ‘Belakane, The Origin of the Secret Keeper Curse’, I’ve been joined by author Angela Carling to chat about her novel. Angela, where did Belakane’s journey start for you?

I was drawing up a character sheet for the character of Belakane, the enchantress that created the curse talked about in the first two books of The Secret Keeper Series. The more I thought about Belakane, the bigger her story became. She went from an angry witch to a very complex character from a volatile time in US history. Before I realized, the story of Belakane was so great that she needed her own book!

I love the gradual character development that you found with Belakane. Is this typically how characters develop for you or do some come to life much faster?

For me, most characters come slowly. I craft them while waiting for things, or at night when I’m trying to fall asleep. The one exception to that is my award-winning novel Shackled. That book was crazy. The characters and storyline came to me and I wrote the entire book in two and a half months.

That is a crazy schedule! Do you find that including events from your own life helps speed up your writing process? For example, did you use situations from your life in this novel?

Other than the emotions of love and betrayal which we all experience, this book was unique in the sense that I tried to stick to the history of the time while weaving in Belakane’s story. Thanks goodness. I would never would want to experience any part of the Salem Witch Trials!

Nope, that doesn’t sound like fun at all! Placing your story during the Salem Witch Trials has meant that your book is set a time that could be unfamiliar to readers. What message do you hope readers take away, despite these differences in time?

People and witches are not always what they appear to be.

Was your greatest reward from writing this book bridging the gap in time, or were you rewarded elsewhere?

I mentored a group of fifteen or so teenage writers for about four years. One of them, Anna Taylor helped me write this book. She’s a very talented writer and seeing her name on her first book, especially after watching her grow as a writer was very gratifying.

That’s a fantastic opportunity for both of you to broaden your writing horizons. What did you learn from this experience?

I’d never co-written with anyone before. As Anna learned, I learned to work together, to meld our two writing styles and ideas to create the final product. It was a great experience!

That is an awesome experience that not many writers have had. Is the challenge of writing what keeps you coming back to write more books?

I’ve always made up stories. it seems there is writer gene and I have it. Plus, stories are an amazing way to look into the window of other ways of thinking and I love being part of that growth process both by reading and writing.

I disappear into my story and hang out with my characters.

I actually have to know at least one of the ending scenes before I can write anything. Once I can see a scene that makes me feel love or pain for my character, I know it is a good story to write and outline it.

Once you have that outline in hand how does the writing stage unfold?

I’m a mom. I write wherever and whenever I can. My hubby is not a night person, so most often, I crank it out after everyone is in bed.

Is editing something else you do yourself when everyone else is in bed?

Oh yeah. Editing is actually my favorite part. I see it like clay and I just keep molding the story until it looks right. This often means 5-8 complete times through the manuscript before I turn it over to a professional editor.

Have you found that your writing style or voice has changed from your repeated re-reads and interaction with your editor?

It has not changed, but maybe solidified would be the best way to describe it. Being a writer is a job where personal growth is essential. After writing The Secret Keeper series, I felt like my author voice was really my own.

Has a strong author brand come out of your solidified author voice?

I have considered creating a publishing company, but not right now. My kids are still my first priority and also, making each book the best it can be. I’m afraid if I took on anything else, it would bog me down too much right now.

It’s fantastic that you’ve clearly set out your priorities and are sticking to them while you continue to work on making your work the best it can be. I’m sure that when you have more time to dedicate to publishing you’ll have an awesome outcome. As someone who has considered creating a publishing company, what is your advice to authors looking to self-publish?

Be patient and open to learning.

What current writing projects has your patience and openness to learning lead you to?

I have a lighthearted romance coming out around Valentine’s Day! It’s called 5 days, 5 Kisses and some parts still make me laugh out loud even though I wrote it. I’m also working on a new series that takes place in the future. The United States is now a country called Eritrea and everyone lives in a home on Traxx and are relocated to a new place every two months. Should be cool!

That sounds pretty quirky and cool to me! Now that I’ve seen a quirkier side of your writing, I can’t leave it alone. Let’s ditch all of the serious writer questions and move on to some quirkier ones I have because I think that your mind might enjoy them more than our writer ones. Let’s start with why is lemon juice made with artificial flavour, and dishwashing liquid made with real lemons?

Because life does not make sense.

That is so true. But can you make sense of why isn’t there mouse-flavoured cat food?

Because cats are too smart and they would know the difference!

Let’s turn the love towards something a little scarier. If you invented a monster what would it look like and what would you call it?

It would look like a giant cleaning machine with brushes and arms to suck up dirt, and I would call it Mega-maid.

I like the sounds of that. I could do with a Mega-maid! But a Mega-maid is not for everyone, but I feel animals are. If you could breed two animals together to defy the laws of nature what new animal would you create?

A cat Ferret. Wouldn’t that be adorable!

Yes, I think it would be super adorable, and I think I’d want one of them more than a Mega-maid! For authors who are looking at these great ideas you’ve created and feel inspired to publish creatures of their own, what is your top tip for them?

Keep your sense of humor. You are going to need it.

Excited to read the book we discussed today? Find it here on Amazon: ‘Belakane, The Origin of the Secret Keeper Curse ( ASIN: B01M100U26 )‘.

Want to find out more about Angela Carling? Connect here!