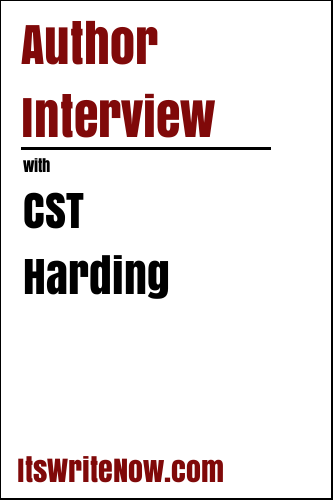 Henrietta Jones, known as “Harry’ is outrageous and scheming, and charms everyone she meets, as she turns the world all around into chaos in 1870s Paris. She becomes a successful criminal, and runs away to Paris, with Joules chasing to try and protect her. After running amok in London and Paris, she plans a festival to save the Moulin de La Galette from development and starts causing continual mayhem.

Murder, mayhem and the Moulin de la Galette. What else could you ever want from Paris in the 1870s? CST Harding, author of the mayhem in ‘Henrietta Jones: Murder at the Moulin de la Galette’ has kindly joined me to share in the madness. There are so many questions I have for you today, but let’s keep it simple and start at the beginning. What inspired you to start writing this book?

I wanted to write about a girl who was headstrong outrageous and successful. It all began when I had this vision of Harry running into a fight to rescue a boy outnumbered and losing. She rescues him of course but then abuses and infuriates him. She then leads him a dance through London and Paris, on both sides of the law, as she turns France upside down. For much of the book, he remains cross with her until finally…..

Don’t give away the ending! We need the next question so we don’t spoil the ending. Okay, let’s move onto the wonderful cast of characters like Harry and Joules. How did they come to life?

I find working out in the Gym often helps! Often I start with an idea, and as I am cycling a snatch of conversation pops into my head, something that helps define the character. For instance, there is a pair of violent men intimidating Harry, and I was actually on the cross-trainer when I thought they absolutely must have secret ambitions to open a florist! Yes I know I am mad!

*Laughs* You’ve made going to the gym fun which is quite an achievement. If making up stories gets you on the cross trainer, then I say go for it! I doubt there are many cross-trainers in 1870s France but are there other aspects of your life that you’ve worked into the novel?

Oh yes. I have worked with many high achieving women, far cleverer than me. Many of them have a little part of them in Henrietta Jones. I could name perhaps six or seven who would be surprised at their latest incarnation.

What was the most important thing for you to say when you were writing about this strong woman in historical Paris?

I have always loved romance which is perhaps unusual for a guy but was never happy with meek wimpy heroines who did nothing. I wanted a heroine, who was a high achiever, who changed the lives of everyone, whilst remaining at heart just a vulnerable girl. Many of the characters are a picture of opposites. To me it’s is what makes them endearing.

I don’t think that a guy loving romance is unusual at all. Admitting it is a bit more unusual, but if you can’t love a love story I think you might have bigger issues. So, where did you find the greatest rewards for writing a romance without wimps?

Seeing where all the characters end up. There are a number of interesting characters and they each start with some qualities that take form and grow foibles and contradictions, ambitions and hopes. They take on a life of their own and I love watching them cope with life’s problems. I have to see where they lead.

What have you learnt by following their lead?

How to make words ‘sing’. The natural poetry of words. Whether I have succeeded is another matter.

From someone who chats with many an author, I can reassure you that you certainly do have a solid level of poetry to your words. But the best way to ensure that the poetry continues to be strong is to keep writing. Where are you turning your pen next?

A new Henrietta Jones book set early in Queen Victoria’s reign about two girls who save the country from anarchists. They have to dress as men to take over the secret service. In the process, they give confidence to the young queen and save the British cabinet. Oh and they find time to fall in love…

Well, why not. Falling in love is in the middle of the to-do list right after giving confidence to the Queen and saving the British cabinet. What is it about writing that has drawn you to continue the Henrietta Jones series?

To create a better world: to find out what happens to my characters: to write about heroes and heroines I admire.

Do you think about that better world, or someone in particular when you write?

Not sure. I am inspired by people I have known, but otherwise, they seem to invent themselves.

How does that invention process unfold? Do it come well formed and you know where the story will lead early on, or do you find out where it will end closer to the end of the book?

I have absolutely no idea until at least halfway through. And even then I write so that I can find out what happens. If I knew the end, what would be the point of writing?

*Laughs* You do have a point there. What does your writing process look like? Do you have any rituals or practices that help keep you focused?

I start a section of the book, writing out the ideas, and plot outlines, and then add to it until I have a skeleton. Only then do I start to write, and the first draft of that section is written purely to get the colour, the idea and the buzz. The next day it usually appears badly constructed, but the idea is good, so needs to be edited. And of course, once the book is finished it needs up to ten edits!

Are you heavily editing the book yourself?

Yes. I have to. Even in the final edits, I am OCD, and can ruminate on a word for hours until it is right.

As long as you are learning and progression in the rumination you are okay to do that. Do you personally feel that your writing and voice as progress through your writing endeavours?

It changes, and will I hope get better. But I may try different genres.

There are many genres out there you can try, so the possibilities for improvement are endless. Have you thought about how you can build your author brand from starting from Harry?

Henrietta Jones may become the author brand if this proves popular. I rather like her. I feel I learn most in the editing process. I suppose because I deconstruct, judge, take a step back and ask myself “is this the best possible? Does it work?

Is taking the time for critical feedback where you feel other authors could improve their own work, or are there other tips you feel is more important? What’s your top tip?

Write as much as possible, as often as possible. Then remove every sentence and word that is not essential.

Sometimes the extraneous is essential. My favourite example of this the rapid-fire questions that I like to ask authors to get their creative juices flowing. Let’s kick off your creative poetry with my first question, why is lemon juice made with artificial flavour and dishwashing liquid made with real lemons?

The essential lemon is not important, only the image of ‘lemon’.

The power of the lemon image. It’s always understated. If you’re in a vehicle going the speed of light, what happens when you turn on the headlights?

The sky lights up as expected but an observer watching me will see nothing.

Ahhh, good to know. Here’s another you might know more about than me, why isn’t there mouse-flavoured cat food?

Yep, and that’s why I don’t have a cat. I would feel too sorry for the mouse. What is your zodiac sign?

A “dinocat” which terrorises the neighbourhood dogs, and eats badly behaved children.

*Laughs* Those badly behaved kids need a few more reasons to stay in line! What happens if Batman gets bitten by a vampire?

Catwoman joins Buffy to hunt him down and lock him in a cage for his own good. Catwoman starts to get ideas…

Of, course how could I forget about Buffy! Are you left or right-handed?

You shrink and become a shadow creeping around frightened of real people, and that they might find you out.

You know that sounds pretty accurate. If you could breed two animals together to defy the laws of nature what new animal would you create?

I don’t think I’d ever want to run into one of them. At least not without a nice big pane of glass between us. If nothing ever sticks to TEFLON, how do they make TEFLON stick to the pan?

They use special Teflon glue made from crushed unicorn horn

*Laughs* What else would you use crushed unicorn horn for? What is your favourite word?

That is an awesome selection. And for my final question of today, I’d like you to take a moment and pick an awesome selection from ‘Henrietta Jones: Murder at the Moulin de la Galette’ to entice those sitting on the fence to pick up a copy today. What’s your best shot?

“You’re just the sort of unscrupulous criminals I need, without conscience or morals; clever, manipulative and female. You are perfect.”

Perfect. Thank you for introducing us to the perfect criminals in ‘Henrietta Jones: Murder at the Moulin de la Galette’ today, and I’m sure the there’s more criminal adventures awaiting Harry in the future.

Want to find out more about CST Harding? Connect here!